Tragic Case of History Repeating Itself

The life of  Chinese restaurant deliverymen is a dangerous one as they can be assaulted, robbed, and even killed.  A recent case in Wilmington, N. C. in June, 2012, involved six adolescent boys robbing and killing a 60 year-old Chinese after which the murderers polished off the delivered food.  Star News Online reported that:

Similar instances of this type of crime  have occurred many times over decades.  For example, in 2009 in North Hanover, Massachusetts, another Chinese man was murdered when delivering food to a fake order to an unoccupied address that was made using a phone number that police traced to a throwaway cell phone. 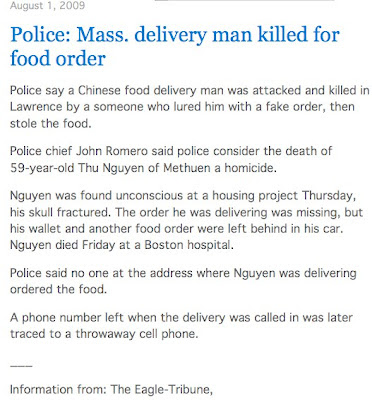 Another case occurred in 2000 when a Queens, New York restaurant owner was bludgeoned to death late one evening when he was making a delivery to an isolated area of town.  According to the New York Times article: 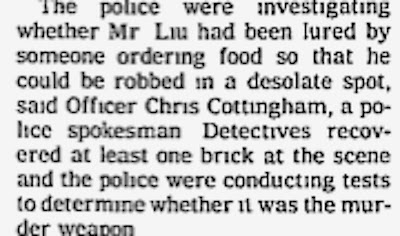 Sadly, these men must risk their lives regularly to eke out a living, support their families, and in some cases, send money back to China to help relatives.  Predatory hoodlums look on them as easy and helpless prey.
Posted by Chinese American Historian By Chance at 7:41 PM No comments:

Interactive Map of Number of Asian Americans Per County 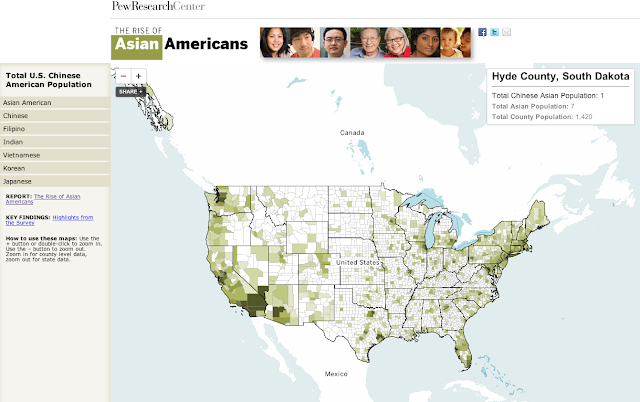 Posted by Chinese American Historian By Chance at 2:06 PM No comments: 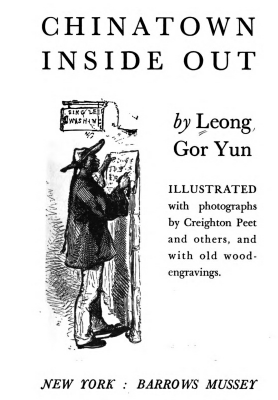 Many accounts of Chinatown(s) I've read have been written by 'outsiders' who dwell on "oriental" aspects to emphasize its exotic and foreign features.  I recently discovered a fascinating "insider"perspective published in 1936 by a somewhat "mysterious" Leong Gor Yun. The noted historian, Sucheng Chan, asserts, without any documentation, that no one knows for sure if the author was a man or woman, Chinese or non-Chinese, and that the name is actually a pseudonym that can be translated into Cantonese as "two persons."

It is, of course, just the views of one (or two) persons. Nonetheless, I found it to be a revealing discussion of what goes on behind-the-storefronts of Chinatown written in an authoritative, but breezy and sometimes flippant style.

And, guess what,  Chinatown Inside Out is available to read online for free on the website for HathiTrust Digital Library.

Posted by Chinese American Historian By Chance at 9:38 AM 2 comments:

One of the wonderful experiences associated with giving book talks, especially out of town, is that once in a while I bump into people I have not seen or been in contact with for decades.  For example, during my visit to the San Francisco area to give a book talk on Chinese in the Deep South at the Foster City Library,  I had the opportunity to meet with two Chinatown pals from my youth, both of whom had the same name, "Mel Lee."  The last time I had seen or heard anything about them was about 60 years ago!
One Mel Lee is now a successful developer of senior residences. He gave me a tour of the wonderful facilities at the "Avenue" in the heart of San Francisco. I noticed photos of Mel posing with virtually every prominent civic leader in town as well as some nationally prominent politicians.

A few days later, the other Mel Lee came up to me after my book talk at Foster City and asked me if I remembered him.  I was hesitant and not sure although he 'looked' familiar even after 60 years! Once he told me he was Mel Lee, old memories were activated such as the fact that his girl friend was (and still is, now his wife) named Jeannie and that he drove a Peugeot 403 with a sunroof back in the late 1950s and that one semester I commuted with them from U. C. Berkeley where we went to college back across the bay to San Francisco.


Posted by Chinese American Historian By Chance at 6:03 PM No comments:

A Darwinian View: How Chinese Survive on Less Food

Miller was from San Francisco. He was a lawyer who had played an important role in Indiana
politics. He had been a Brigadier General in the Union Army and came to California after the
Civil War. A conservative Republican, Miller had run on the Non-partisan ticket.

"| answer, cheap labor may, under certain conditions, be in an economic sense, an
advantage, but not so to us. immigration has been a blessing to the United States; not
because it cheapened labor, but because it brought within our borders, in aid of the great
work at development, men who established homes, whose accumulations swelled the
aggregate of the wealth of the nation; men who have become a part of the nation and
contributors to Anglo-Saxon civilization... For thousands of years, China has been tilled to the
verge with a redundant population. The life of the average Chinaman has been a mere
struggle tor animal existence. He bears with him the heredity of poverty and unrelenting toil
for food for thousands of years. His physical organs have become adapted to insufficient
food. There has been a process of selection going on in China under which the heavy
feeders have fallen out and under the law of the 'survival of the fittest' none but those who
can practice the most rigid self-denial as to food remain. They have also been trained by
centuries of incessant toil to procure the maximum of subsistence from the soil.”

Posted by Chinese American Historian By Chance at 3:54 PM No comments: