Although this landmark U. S. Supreme Court case, Gong Lum v. Rice (1927) dealt with a challenge to the exclusion of Chinese children from a white school in Mississippi, it had an impact that extended far beyond Chinese or Mississippi.

As reported in the Trenton Evening Times on Nov. 21, 1927, the high court decision had implications for policies at a school in Toms River, New Jersey. Only a few months earlier in June, the State Commissioner of Education had ordered that "colored children of the district who had been grouped in special classes at South Toms River" be readmitted to the school at Toms River. He maintained that special grouping should be imposed only on criteria other than religion, nationality, or color.

However, in the wake of the adverse outcome of the Gong Lum v. Rice case, the new School Commissioner immediately stated on Nov. 27 that the court ruling would permit local school boards "to exercise the right of segregation if they so desire."

Although this article dealt with only one instance, in all likelihood, the Supreme Court ruling for Mississippi encouraged consideration of and, in many places, implementation of restrictions on equal access to schools in many other communities.  It would not be until a quarter of a century later that the U. S. Supreme Court would finally rule against school desegregation in the Brown v. Board of Education (1954) decision.

Posted by Chinese American Historian By Chance at 8:24 PM No comments: 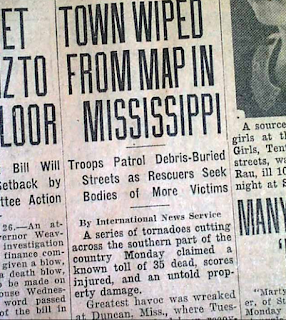 A tornado ripped through the tiny town of Duncan, MS. in 1929, "wiping it off the map," according to one newspaper account.  At least 35 deaths occurred including everyone in the Fong grocery store family, save a 4-year old boy, William Joe Fong, who miraculously survived.  Several Chinese grocery store families came to the rescue and helped raise him.  He attended and lived at the Chinese Mission School in Cleveland, MS., went on to serve in the Navy, and settled in California where he married and started a family.  After a successful career as a pharmacist, he enjoyed his retirement in Sunnyvale, CA. until he died in 2007.

Now out of the blue, a long-time Delta resident, Linda Gatewood Bassie,* posted on Facebook the photograph below that was found on the street after the 1929 Duncan tornado.  I was familiar with the story of the orphan Chinese survivor of Duncan from prior research and knew it had to be William Joe Fong. As seen in the chain of posts below, Chinese who grew up in the Delta confirmed the identification and filled in details. Eventually, Carol Fong, William's widow, was informed of the discovery of this photograph, which she gratefully acknowledged, noting it was one that her family had never previously seen. 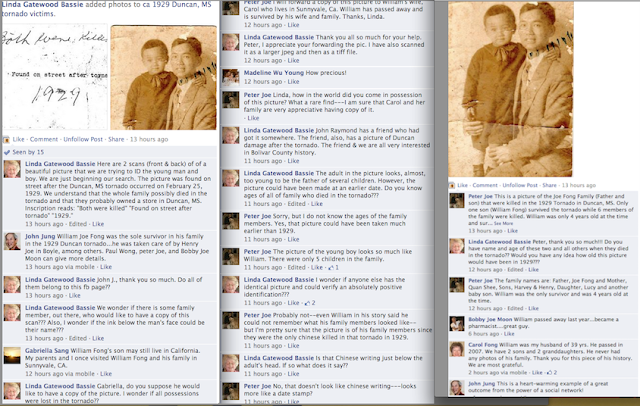 Facebook has many criticisms, some of which are valid, but here is one example of a positive outcome that was generated through it that would not have otherwise likely to have occurred.

* Linda Gatewood Bassie is the same sharp-eyed person who located, and posted on Facebook,  the 1924 Rosedale School 3rd-4th grade photograph showing Berda and Martha Lum, who were denied admission to a white public school, as described in an earlier post on this blog, an incident that led to the 1927 Gong Lum v. Rice U. S. Supreme Court case.

Posted by Chinese American Historian By Chance at 1:48 PM 3 comments:

Early Chinese immigrants initially settled on the west coast, but gradually moved to areas in the middle of the country, partly to escape the violence inflicted on "Chinatowns" during the late 1800s in the western states. In the communities where they settled, they were often the only, or among few, Chinese so that they suffered cultural isolation as well as racial prejudices. Moreover, they were not safe from physical violence as they were robbed, assaulted, and even killed.

For example, in Joplin, Missouri the 1870 U.S. Federal Census listed no Chinese immigrants but in 1880,  at least one Chinese immigrant,  27 year old Lum Wong lived there was described as, “servant – clerk in store.”    A few years later, in1883, an advertisement appeared in the Joplin Daily Herald for a Chinese Laundry. Soon five other Chinese immigrants are listed as residents of Joplin. Due to anti-Chinese prejudices, they were not allowed to work in the mines and had to eke out their living in whatever activities they could find open to them so most, if not all, worked in the laundry business.

In the following decades the Chinese population in Joplin grew and some moved from laundries to open Chinese restaurants, often bringing relatives from China to work as cooks and waiters.

Life was difficult enough without the additional burden of racial prejudice that sometimes led to violence toward them. Some were robbed, assaulted verbally and physically, and even killed. In 1909 one restaurant owner was working late at his restaurant one evening when four strange men entered and sat down as if they were going to order a meal. Without warning, the men jumped to their feet and attacked the Chinese with a blackjack, beating and choking him into unconsciousness.
One evening in January, 1916, a free-for-all erupted at the Shanghai Low restaurant after a patron refused to pay for his dinner. When confronted by the owner of the restaurant, the man put on a pair of brass knuckles and hit him. Chinese wait staff rushed to the rescue which prompted other diners to join the fray. Brass knuckles, a knife, and several chairs were used in the ensuing melee. Sixty year old Jung Ginn was seriously injured when someone hit him over the right eye with a pair of brass knuckles.

Although this example cites the plight of Chinese in Joplin, Missouri in the late 1800s and early 1900s, it is not intended to single out this town. Similar mistreatment of Chinese occurred in many other small towns. In fact, a current website, Historic Joplin, to its credit, acknowledges this terrible past treatment of Chinese immigrants.

Posted by Chinese American Historian By Chance at 5:10 PM No comments:

Could Chinese Attend White Schools in Mississippi in the 1950s?


Jin Jue, a Chinese who was born in and grew up in Mississippi during the 1950s shared his observations about how it was determined whether Chinese children could attend white public schools. Although Mississippi law at that time was unfavorable toward Chinese, he pointed out that the situation was not handled the same way in different communities:
Chinese rights to attend a white school were determined on a county by county basis. While my family attended a white school, my sister's husband was not allowed in the county he lived in, and he had to travel 40 miles to another county (to attend school).
One summer, my parents moved from Cary, Mississippi, where the Chinese attended a white school, to Warren County where there were no Chinese attending the local school. My dad asked a local customer when the local school was starting and where the bus stop was.
That morning of the first day of school, my dad sent my older brother and sisters out to stand at the bus stop to see what would happen. The bus came by, and my brother and sisters boarded the bus with the other (white) kids. As was common in those days, the Chinese parents never went with their kids to school. The kids had to fend for themselves and somehow were enrolled in their proper classes.
The bus driver, who most likely, never saw an Asian in his whole life, didn't know what to do about these strange looking (Chinese) kids boarding his bus. He could have refused to let them on (anyone can say no), but figured it was none of his business to decide what to do with these kids.
My brother and sisters arrived at school, and the teachers didn't know what to do, so probably the Principal was called and the matter placed in his hands. The Principal called the Superintendent of Education for the County and some time after much debate, a decision was made to let them enroll.
So the first integration of Chinese in (a) white school in Warren County was allowed because a bus driver was passive enough not to get involved, or wasn't "redneck" enough to say "No way they getting on my bus!!!,” which in turn started the chain of event that led to their eventual enrollment.
My discussions with other Chinese who grew up in the Delta between the 1940s and 1960s confirm Jin Jue's experience that in some towns Chinese were accepted into white schools with little difficulty while they were denied admission in other nearby towns. His cousin, Lillie, in fact, who stayed in Cary was able to attend white schools. Apparently if your father was well-regarded and or knew the 'right people' his kids found little opposition in attending white schools.
Posted by Chinese American Historian By Chance at 8:47 PM 3 comments: