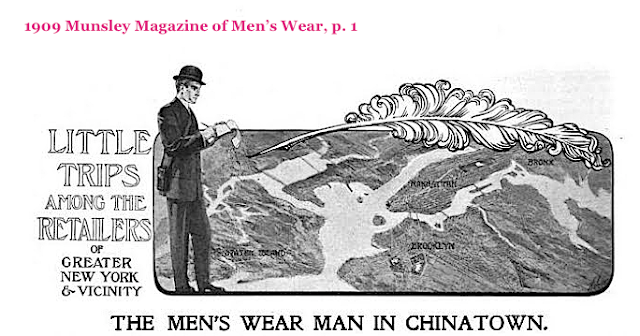 An adventuresome white writer ventured into New York City Chinatown in 1909 to report on life in this enclave. He noted that, "Mention Chinatown and Chinaman and what picture comes before your mental vision? A laundry __ an opium joint __ a chop suey restaurant or a mission where Chinamen become Christians through the efforts of zealous American females and __occasionally some happening that stirs up all the newspapers and public to a passing interest.  Rather a gloomy picture if taken as a complete view of the Chinese."
He braced himself before making his visit, writing in the third person,  "It was quite natural that one should feel some trepidation in visiting Chinatown for the first time so the writer went there equipped with a letter from the police department but there was no need of any precaution for he was met everywhere with courtesy and hospitality."
He focused on what types of clothing the Chinese men wore and concluded that clothing and menswear in general is not as important to Chinese as it is to Americans. There are very few changes of style, with the most radical changes occurring with the change of dynasties.

The writer concluded after his visit to Chinatown that: “If you go to Chinatown looking for bad things you will find them—so you will on Fifth avenue or any other locality. If you expect to find some things uniquely bad you will be disappointed but if you go there to learn something of interest of a strange people , of a great empire in the far East, you will do so.”
Posted by Chinese American Historian By Chance at 7:43 PM No comments: Links to this post

A wealth of information about important topics ranging from historical to psychological to cultural aspects of Chinese- and other Asian Americans is available through interviews and discussions on many podcasts, freely downloadable, from itunes. 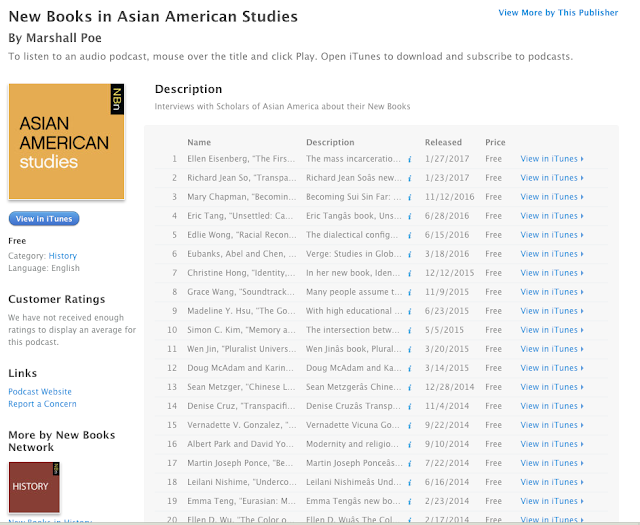 Another podcast, They Call Us Bruce, by Jeff Yang and Phil Yu features discussions and interviews of the work of contemporary artists, politicians, writers, and performers. 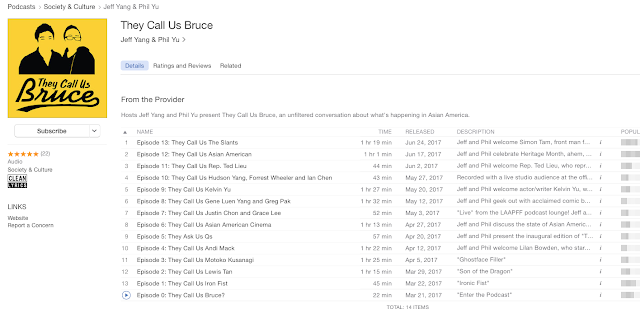 Another podcast resource is the Potluck Podcast Collective

Posted by Chinese American Historian By Chance at 3:03 PM No comments: Links to this post