Thomas Nast (1840-1902) was an illustrator and cartoonist for Harper’s Weekly from 1857 to 1887. He might be considered the pioneer political cartoonist and his work was highly influential on public opinion. In his 30-year career with the magazine, Nast drew approximately 2,250 cartoons, including 46 related to "the Chinese Question." Nast’s Chinese drawings align with Harper’s Weekly editorial position of inclusion and tolerance for all immigrants. They depicted the plight faced by the Chinese created by anti-Chinese feelings and generally contributed a rare, positive voice for Chinese American immigrants – setting him apart from the work of his peers. 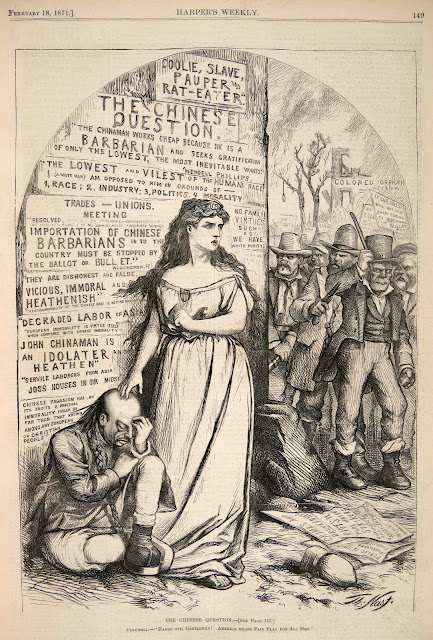 In contrast, George F. Keller, cartoonist for The San Francisco Illustrated Wasp, an illustrated weekly magazine of “commentary and satire” often took cruel aim at the Chinese by exaggerating physical and cultural differences with his drawings to create fear and animosity toward Chinese in the American public.
Keller’s images were some of the most vile distortions against the Chinese in California. In the four images below, Keller attacked two clergymen, Gibson and Loomis, who in defense of Chinese immigrants in 1877 testified to a Senate Committee of California that they were of "good character." Keller's cartoons, however, questioned whether they were peaceable, clean, honest, and suggested they were likely to have children with white women. 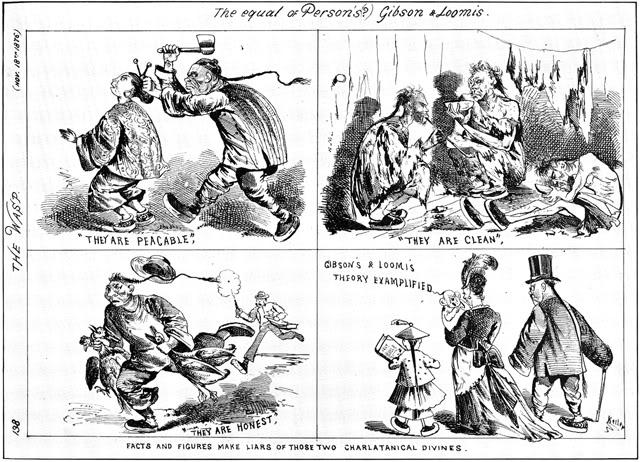 More details about the work of Thomas Nast and other political cartoons about topics other than Chinese immigrants can be found on the excellent website created by Michele Walfred.


Posted by Chinese American Historian By Chance at 7:47 PM 2 comments: Links to this post

The majority of Chinese laborers who came to the U. S. in the late 19th and early 20th century were bachelors, or if married, left the wives in China.  There were very few Chinese women in the U. S. especially after the Page Act of 1875 restricting entry of Chinese women other than those smuggled in by Chinatown tongs and forced into being sex slaves.  Under these circumstances, only a small number of Chinese men married, and among the few who did, most married white women.  A previous post described several instances of marriages between Chinese men and white women in the late 19th and early 20th century and the reactions, often negative, of the mothers of the white women and of the American public. These reactions varied in different regions of the country. While such marriages in the West or South met strong disapproval, in New York City and parts of New England, they faced less criticism.  A look at two mixed race marriages below illustrates how different the reactions could be.

In 1883 Wong Suey, a Chinese laundryman in Santa Cruz, California and an adolescent white girl, Sarah Burke, who worked as a domestic in a hotel. They wanted to marry but local opposition was so strong, they decided to seek a marriage license in San Francisco. Arriving in San Francisco Chinatown they rented a room in a brothel for the night intending to get married the next day.  Police, however,  discovered Sarah and Wong there and arrested them. Wong was charged with a felony in having lodged a girl under age in a house of ill-fame, while Sarah was booked for residing in a house of prostitution. San Francisco newspapers covered the case extensively for several days.

The San Francisco newspaper reporter wrote:
"Sarah is an orphan without any competent advisers or guardians, .... there was opposition of the people of Santa Cruz to the union of a Chinese with a Caucasian. ...The girl claims to be 20 years of age, though the police discredit the statement. In appearance she is rather pretty, her large black eyes strangely illuminating her somewhat expressionless face. Her figure shows more plainly than her words why she is unable to take care of herself, being with child some five months....Wong Suey has strong Caucasian features, and is by no means a poor specimen of his race.

A few days later, Sarah Burke had to appear before before the Commissioners of Insanity. She had been arraigned on the complaint of her father, Winifred Burke, who deemed the fact of her infatuation for a repulsive Chinese sufficient grounds for believing that she had lost her reason. The Commissioners weighed the evidence and concluded that while she was evidently suffering from a moral eclipse,  her mental trouble did not, in their opinion, come within the meaning of the law. A report to that effect was made to Judge Finn, who had been asked to conduct this examination, and thereupon she was discharged. 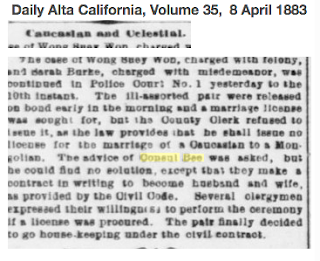 The young couple still faced the problem that the law forbade marriages between Caucasians and Mongolians, and they were advised to execute a civil marriage contract in writing.

Yung Wing was a highly educated man and was the first Chinese graduate of Yale University.  He later headed the Chinese Educational Mission, an experimental project to bring 30 young Chinese boys to study in New England in hopes that they could return to China and bring Western ideas to help China enter the modern world.
in the spring of 1875 Yung Wing married a white woman, Mary Kellogg, who came from a well-to-do family in Connecticut. Their marriage was well-accepted and even lauded by many. The account of the nuptials that appeared in newspapers across the country read much the same as it would have been for marriages involving white couples, complete with a description of the attire of the bride and groom, who attended, who officiated, and what foods were served, and honeymoon plans. 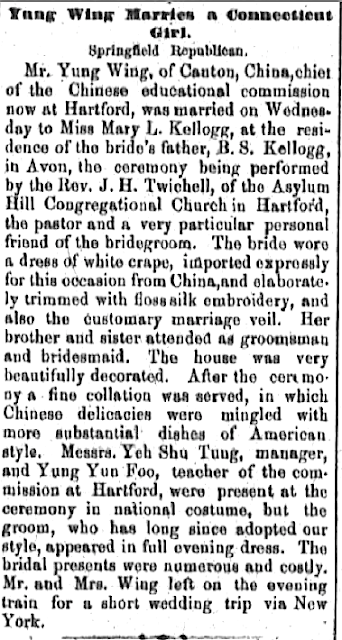 Although these two mixed race marriages took place within a few years of each other, they met with completely opposite reactions. Yung Wing was well respected and Mary Kellogg came from a prominent Connecticut family.  On the other hand, Wong Suey was only a laundryman and Sarah Burke was an adolescent girl of humble origin. During this era, the Yung Wing marriage to Mary Kellogg was the exception rather than the rule.

Posted by Chinese American Historian By Chance at 10:51 AM No comments: Links to this post

The Chinese Exclusion Act was proposed to prohibit the immigration of Chinese laborers to protect jobs of white workers. It was passed in 1882 for 10 years but extended for decades until 1943 before it was repealed.
This legislation also prevented many Chinese immigrants already in the United States from bringing wives and children from China.
As a consequence, it unintentionally created a lucrative opportunity for Chinese tongs to bring Chinese women to the United States, many only just past puberty, for sexual purposes.  They deceived many of these women and led them to believe they would be married off to wealthy Chinese bachelors or “Gold Mountain men.” Instead, they were held captive and forced to become “sex slaves.”

Unlike “prostitutes,” who could be said to have some degree of choice in deciding their sexual lives, the “sex slaves” had no control over any aspects of their lives.


The front page of the San Francisco Call on May 3, 1900 described in detail the devious method that unscrupulous Chinese tongs devised to bring over young Chinese girls with false documents on ships of the Pacific Mail Steamship Company.  They made huge profits by selling the girls into slavery to fulfill the sexual needs of the thousands of bachelor Chinese laborers, not to mention the sexual desires of American men.

Such profiteering from the exploitation of Chinese women was not limited to Chinese organizations. Some Chinese who had American born daughters would send them to China to live. They could then sell their documents to women in China who wanted to emigrate to the United States in hopes of a better life, only to be sold into slavery.
Three young Chinese girls who escaped their captors and received refuge at Chinatown Mission Houses in 1897 claimed that their own mothers had sold them into slavery. Their captors argued that the girls were stolen from them, and threatened one mother that if she could not bring her daughter back, she would receive "a touch of Chinese justice."

The magnitude of the problem led to a petition to the President of the United States requesting that there be an end to the enslavement of Chinese women into forced prostitution.

It is not known how many signatures were submitted on the petition and whether it had any impact on the problem.
Concerned Protestant missionaries led by Donaldina Cameron who led police raids to rescue many sex slaves in San Francisco testified in 1901about the extent of the problem and urged city officials and police take action to terminate this deplorable exploitation of Chinese women as sex slaves. 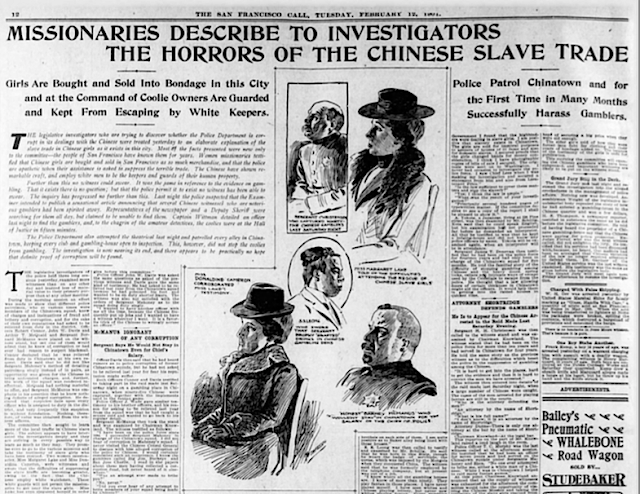 A newspaper article in 1919 asserted that the Chinese sex slave problem was  being solved and that the work of missionaries such as Donaldina Cameron was instrumental in rescuing many girls and bringing the problem to the attention of the public. 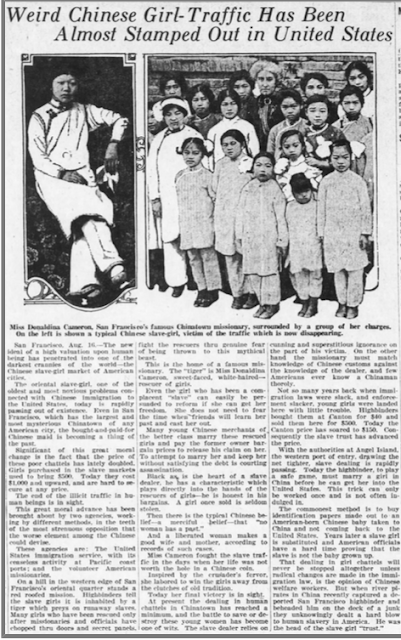 Posted by Chinese American Historian By Chance at 8:31 PM No comments: Links to this post