Chinese immigrants to the U.S. had it easy...

Compared to the gauntlet that Chinese immigrants to Australia faced a century ago, their countrymen coming to the U.S. had an easier, but still difficult, time gaining entry.

Chinese seeking entry to Australia not only had their mug shots taken but also handprints of both hands as in the sample below. 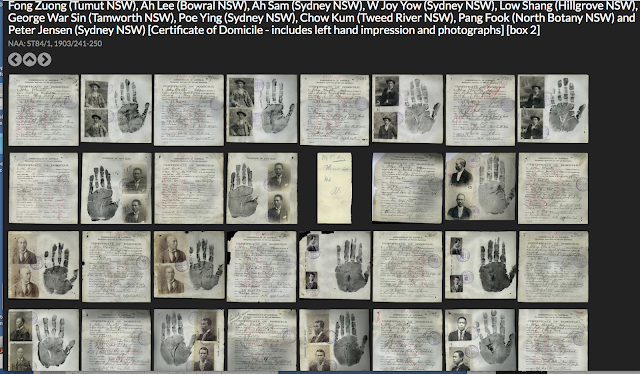 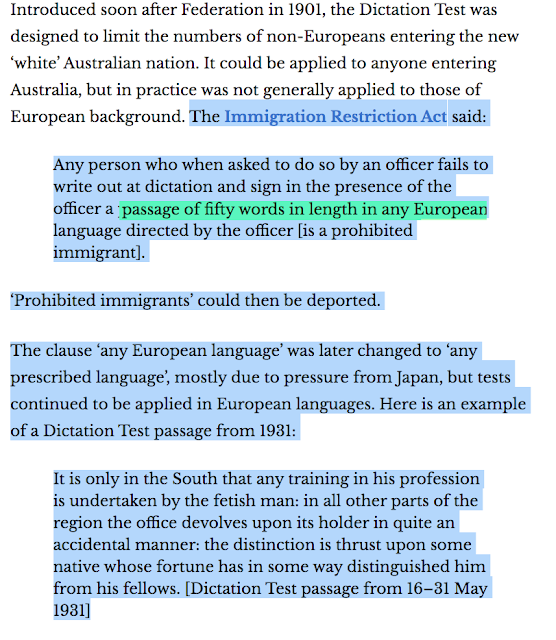 Below are other examples of 50-word texts for the Dictation Test that most Chinese would probably fail. 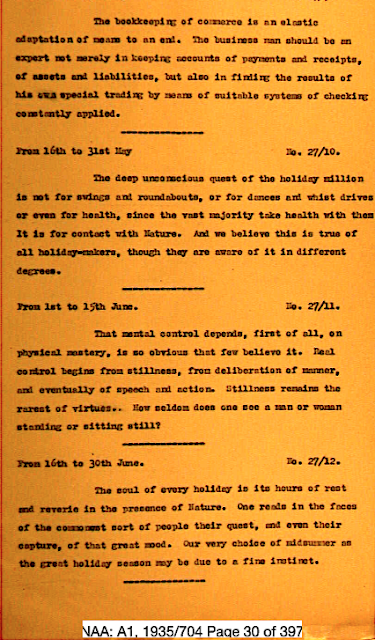 Posted by Chinese American Historian By Chance at 8:54 PM No comments: Links to this post

Where Did Thousands of Suddenly Unemployed Chinese Railroad Workers Go After the Transcontinental Railroad Completion, May 10, 1869?

Hundreds of Chinese Americans came from all over the United States to Promontory, Utah, on May 10, 2019, to celebrate the 150th anniversary of the completion on May 10, 1869, of the transcontinental railroad at Promontory, Utah. Some were descendants of the 15 to 20,000 Chinese who labored for the Central Pacific Railroad (CPRR) on the construction of the western section from Sacramento, California to Promontory, Utah. Without their labor, the completion of this historically significant railroad would have taken much longer but most Americans have not known about their role. In fact, the 1869 photograph showing the meeting of locomotives of the Central Pacific and Union Pacific Railroads did not include any Chinese laborers, as if they played no important role. 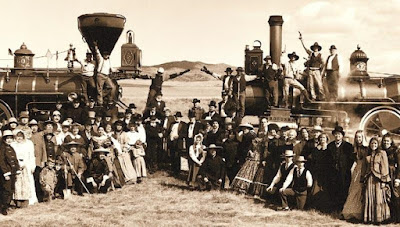 The 150th anniversary has served as an opening to gain national recognition and appreciation for the achievement of the Chinese laborers. Noted New York Chinatown photographer and social activist Corky Lee has organized activities involving a pilgrimage of hundreds of Chinese Americans on the anniversary of the "Golden Spike" celebration of the completion of the railroad in several recent years. He arranged for a reenactment of the above 1869 photograph, as shown below, with Chinese Americans posing on and in front of the locomotives. His inspired photograph serves to demand recognition of the contribution of the Chinese workers by all Americans. 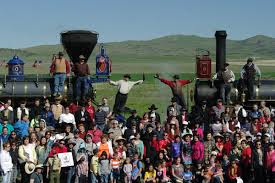 But, in all the excitement around celebrating the 150th anniversary of the completion of the railroad, little attention has been given to the question: what happened to these Chinese, especially the ones who were present on May 10, 1869, but found themselves unemployed the next day.

The thousands of Chinese who came primarily from northern California to work on the railroad were not provided free transportation back to California and left to find their way back on their own.

Fortunately for them, many peripheral rail lines in other regions of the country were being constructed, and some unknown number of the Chinese who worked for the Central Pacific Railroad found work on these other rail lines according to research by Shelley Fisher Fishkin at Stanford University. 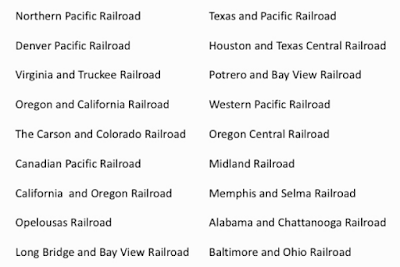 Work on these small regional railroads in some ways produced more important consequences for the Chinese in America than the transcontinental railroad did. Opportunities to work on these small regional lines facilitated the dispersion of Chinese into the hinterlands of the United States. Anti-Chinese feelings created dangers to Chinese in the west and they increased until they were literally being expelled by threat and physical violence from western cities by the 1880s. Dispersal into the hinterlands was partly a matter of seeking relative safety. Otherwise, there were few positive incentives for Chinese to move into areas where they would be the only or one of few other Chinese.

Prior to 1860, there were few Chinese living beyond the west coast or New York City.  But by 1870, Chinese were found in small towns in Nevada along the route of the CPRR and as far east as Odgen and Salt Lake City in Utah. With their work on the railroad completed, those who did not return to the west coast or find work on regional rail lines may have been stranded and settled where they were in 1869 when the transcontinental railroad was completed.

A decade later in 1880, Chinese could be found throughout the midwest, southwest, and Deep South. This dispersion could be the effect of Chinese working on the regional railroads and staying in the area when their railroad work ended.

But what work did these Chinese in the hinterlands do? During the Great Depression of the 1870s the increasingly virulent anti-Chinese prejudices led to Chinese being excluded from work in many industries such as mining, fishing, manufacturing, lumbering, and farming where they had previously worked.  Not being hired by white employers, Chinese survived by opening their own businesses often with the labor of family members, including children.  Such circumstances contributed to the growth of Chinese hand laundries, which until the late 19th century was the only business tolerated for Chinese.  Family-run grocery stores mostly in black neighborhoods, especially in southern states, were another means for earning a living. Entering the 20th century, as Chinese food became less 'frightening' and with the attraction of the chop suey craze, family-run restaurants replaced laundries as the most prevalent self-owned Chinese business.
Posted by Chinese American Historian By Chance at 9:39 PM No comments: Links to this post 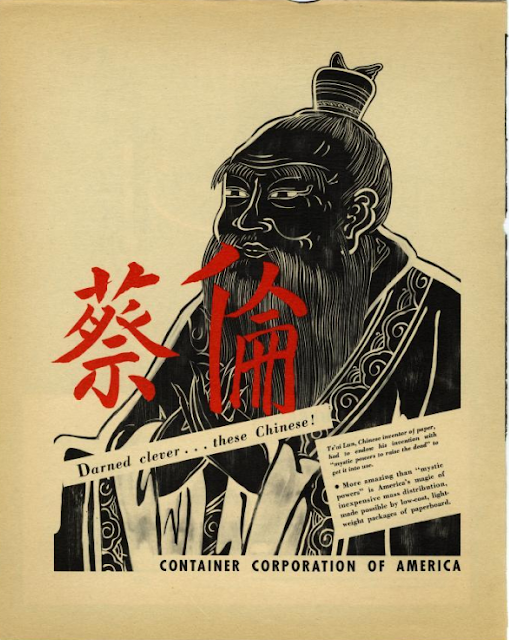 A major American corporation ran an ad back around the 1960s that seemed to praise the Chinese as being "darned clever" for inventing paper many centuries ago, really wanted to brag about how more amazing its paperboard was in lowering the cost of mass distribution.

But Chinese were also often viewed as cunning and conniving in their dealings so that they were not trustworthy.  Consider two examples, which, unfortunately, attest to these negative images.

In 1885, a news article described how some Chinese immigrants go to Victoria, British Columbia, Canada, where they would deliberately leave their luggage and then cross the border into the U.S. at Port Townsend, Washington. Then they go to the customs office at Port Townsend, Washington to obtain a document allowing them to exit the U.S. to get their luggage in Victoria and bring it back with them when reentering the U.S. 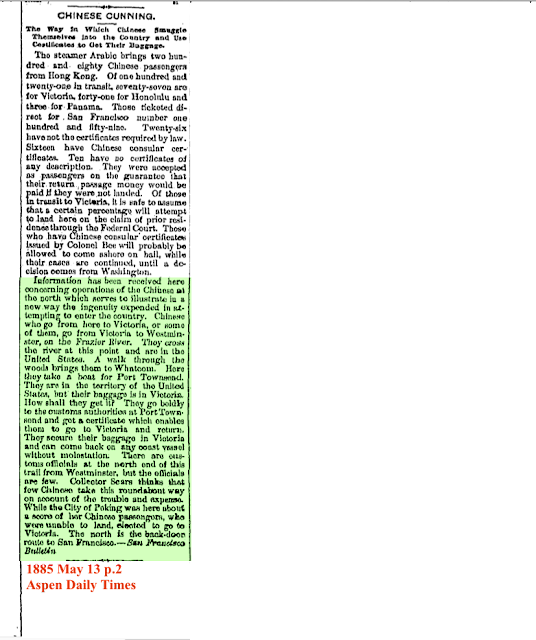 A second news article in 1910 described how Mow Yung (English meaning "useless") was slated for deportation even though he was born in the U.S. He did not protest because he saw this as an opportunity for a free trip to visit China for the first time and to get acquainted with relatives.  Meanwhile, his father prepared affidavits that his son was a U.S. citizen and request that the U.S. pay for his trip back to the U.S. 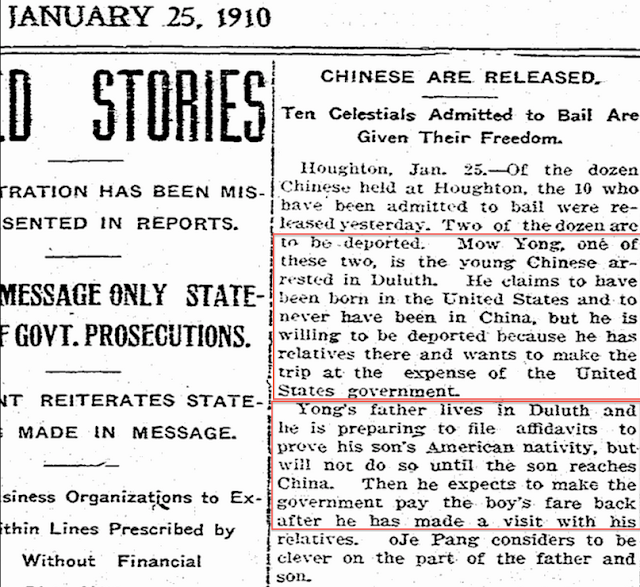 These "clever" tactics, unfortunately, harmed the Chinese in America because it fostered negative images that reinforced prejudices against all Chinese.
Posted by Chinese American Historian By Chance at 9:49 PM No comments: Links to this post

Were Colored People Allowed to Testify For Residence of Chinese in 1893?

The Geary Act of 1892, the first of several 10-year renewals of the 1882 Chinese Exclusion Act, added onerous conditions such as the requirement that Chinese had to carry Certificates of Residence with them or risk arrest and deportation. 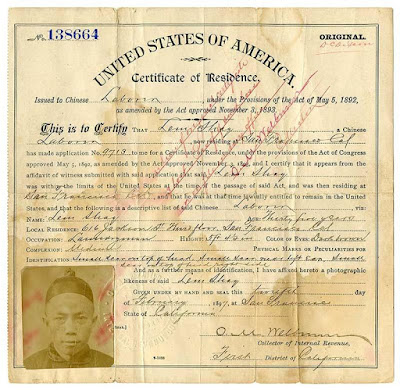 If a Chinese claimed to have lost his certificate or was late in applying, a white witness could vouch for his residency but a Chinese could not because it was felt they could not be trusted to give honest testimony. But a question arose as to whether the original wording in the act, specifically that a witness be white, excluded the acceptability of testimony from a colored person. 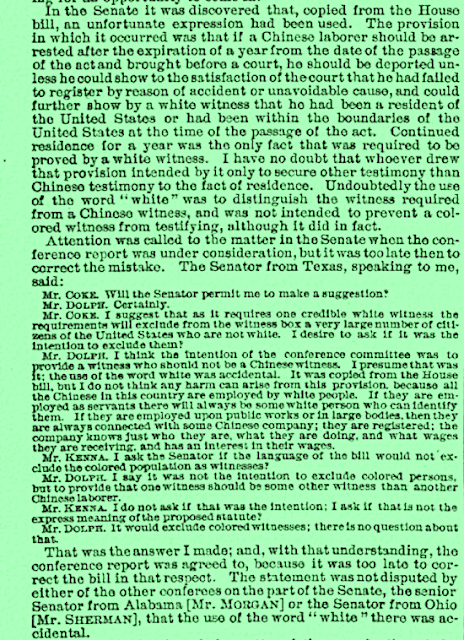 It was admitted that in their haste to exclude Chinese as witnesses, the legislators choose the term, "white," and there was no intention to exclude colored persons from acting as witnesses for Chinese. The lawmakers agreed that colored persons could testify on behalf of Chinese, but one wonders what percentage of witnesses were white vs. colored.

Posted by Chinese American Historian By Chance at 10:22 PM No comments: Links to this post