The Mandarin Cafe of the 1930s in Bakersfield


Gilbert Gia, a local historian of Bakersfield, California, shared nostalgic reflections about the the Mandarin Cafe, a Chinese restaurant and night club owned by Earl and Alice Wong that flourished briefly from the mid to late 1930s as seen through the eyes of Carlye Nelson, a musician who performed in the 4 man band that played for dances nightly at the Mandarin. 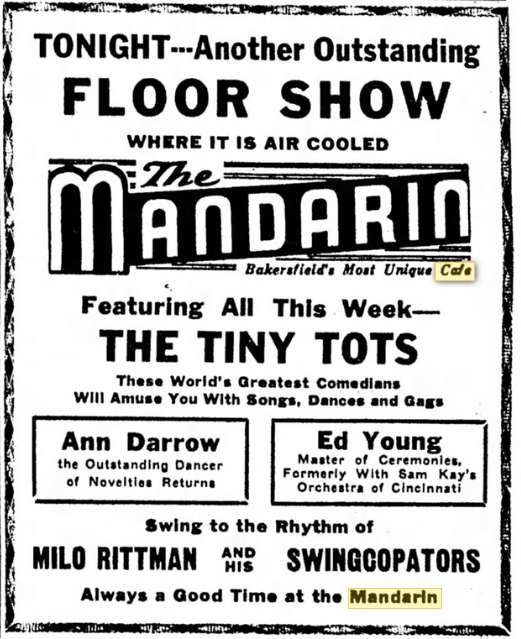 "Earl Q. Wong, was born in China, married Alice Mar in 1919, and
in the early 1920s the family came to Bakersfield. In 1923 the Wongs
bought a residential lot near today’s downtown  Bakersfield in the
Hudnut tract near 27th and O Streets."

"Earl Wong’s son Delbert (who would go on to be the first Chinese American
to graduate from Stanford Law School, and the first Chinese American to be
appointed to the bench in the continental United States and later serve on the
Superior Court) recalled that by 1926 his father was “just getting started in
his Lincoln Market.”  Explaining why or how his father got into the cafe business,
Delbert noted that "I have a vague recollection that the reason my father went into
the night club business was that he had extended credit to the previous owner, who
was a customer of the Lincoln Market, and my father had to take over the
Mandarin when the customer was unable to pay."

Angelo and Julia Pierucci, changed the name to the Mandarin Café,  and
with his wife went into the nightclub business in 1935.

According to one of the musicians, Carlye Nelson, who played at the
Mandarin and later performed with the Glenn Miller Band later during WWII:

“We played seven nights a week from 9 PM 'til two, pl us a Friday
afternoon show rehearsal. Our four-piece orchestra consisted of a
trumpet (Laurie), piano (Mike Richmond), drums (Gifford), and me on the
sax, and I doubled on the violin. Word of what to expect in music at
the local clubs circulated among show performers, and we had an
excellent reputation. We were also popular with the local dancing
customers, and although the dance floor was small, it saw a lot of
action. The floor was painted in a spider web motif, and in the center
of it was a glass lens that had a spotlight under it.

“The mistress of ceremonies was a more-or-less permanent girl who
had a taste for alcohol and who could sing as well as “M.C”. Besides
her salary, the club gave her a discount on the drinks she consumed.

“The mandarin was a good place to work. The bartenders and cooks
were Chinese. The cooks--who lived in the basement--were pleasant but
would tolerate no outsiders in their kitchen. At first Mrs. Wong would
get coffee for us, but later they put the coffee urn where we could
reach it ourselves without bothering the cooks. If we wanted to eat at
the club, we could get it for half price.

The Mandarin Café and Night Club closed in 1938 but reopened in
1939 under new ownership as Club Cathay. In later years it was the
Nanking Café. Today a parking structure stands where dancers once spun
under a "cobweb" ceiling. Also gone today is a word that was at one
time commonly understood.

The complete article can be downloaded from the bottom of a page on this link.

Posted by Chinese American Historian By Chance at 3:06 PM No comments:

Chinese To The South 4. Will They Stay?

It is no surprise that the early Chinese immigrants in the middle 19th century arrived and mostly settled on the west coast and that some moved toward the Rocky mountains when Chinese were recruited to work on the building of the transcontinental railroad in the mid 1860s. What is not so easy for many to comprehend is why and how small numbers of Chinese gravitated to the Deep South, especially Mississippi and Georgia, by the 1870s.
One key factor was the end of slavery in 1865, which posed a serious threat to the availability of cheap labor for the South.  Many freed slaves became part of the Great Migration to the large cities of the North such as Chicago.  At the Memphis Convention of cotton plantation owners from several states in July, 1869, a proposal was made to recruit Chinese workers, especially because with the recent completion of the transcontinental railroad in May, 1869, many Chinese were no longer needed in railroad work although some did find work on smaller regional rail lines.  Chinese workers were viewed as a source of cheap labor to replace blacks in the cotton and rice fields of the South. In Augusta, Georgia, Chinese in the north were recruited to fill the need for cheap labor to help build the Augusta Canal to supply hydroelectric power for their textile mills.
Other parts of the South also showed interest in recruiting Chinese labor.  Savannah was receiving 14 Chinese to work on rice plantations across the Savannah river in South Carolina.

In addition, there were some objections among townspeople about bringing Chinese.  Fears that hordes of Chinese would overrun communities arose such that Augusta recruiters tried to reassure residents that there were "not more than thirty Chinamen there."
Blacks, who were likely to be displaced by Chinese, showed both curiosity and hostility toward these foreigners when they first arrived in their Chinese attire, queues, and strange sounding language. An editorial in a Vicksburg, Mississippi paper reflecting on the expulsion of Chinese from California in the 1880s. observed that if negroes are duped to make an exodus to the frozen North, the South will have the Chinese to replace them.

However, once Chinese came to the South, they did not take well to plantation work in the fields, and generally preferred to open their own businesses, mostly grocery general stores and hand laundries. However, they were not well accepted and were sometimes victimized by assaults and robberies. In 1900 whites in Rosedale, Mississippi, ordered Chinese merchants to leave the country within five days, leading the Chinese to seek a meeting with the state governor who promised to protect their rights.


Posted by Chinese American Historian By Chance at 8:24 PM No comments:

Connections Between the Soong Sisters, a Chinese who served in American Civil War, and Macon, GA.

It might seem very unlikely for there to be connections between Macon, Georgia with the Soong sisters, arguably the most influential trio of sisters in modern world history, and with a Chinese who fought for the South in the American Civil War.
Cao Zishi, a 14-year old Chinese boy adopted by missionaries in China was brought to the American South in 1859 just before the outbreak of the Civil War. Adopting the American name of a benefactor, C. K. Marshall, he volunteered for the Confederate army although it is unclear whether at his young age he actually engaged in combat or was just part of the support personnel. In an interview in 1905, Marshall's son mentioned that Marshall had lived near Macon, Georgia. After the war, Marshall attended college in Tennessee and then returned to Shanghai as a missionary in 1869, and he founded a school that later became Suzchou University.
During his stay in Shanghai, Marshall met Charlie Soong, another Chinese who lived in the American South for many years. He had studied theology in Wilmington, North Carolina as well as at Vanderbilt University in Nashville, Tennessee. After his return to China, Charlie Soong made a fortune selling Bibles, funds that he used to help Sun Yat Sen's revolution in 1911.

The common background of Soong and Marshall with Christian religion in the American South might have led to Soong and Marshall becoming acquainted in Shanghai.  Marshall, in fact, became a tutor for the Soong daughters teaching them rudiments of Chinese characters and some of the classics.
Soong met and married a well-educated Chinese woman from a prominent family. They were ahead of  the times and wanted their daughters to be educated, but China did not have colleges for women so they turned toward the United States.   Due to his own positive experiences in the American South, Soong chose to send his three daughters to the American South for their schooling.   He asked W. Burke in Macon, Georgia, a former classmate at Vanderbilt who became a Methodist missionary, to accept them as his wards.

The two oldest daughters enrolled at Wesleyan College for Women in Macon.  However, Macon seemed to have been a bad choice for 13 year old May-Ling as she was not allowed to attend a white middle school in Macon because she was not white.  This actually worked out to her advantage as she received a better education from a private tutor than a public school could provide.

The three Soong daughters would later have great influence in China's, and world history.  The oldest daughter, Ai-Ling married H. H. Kung, richest man and finance minister of China,  Ching-Ling, the next oldest married the leader of the Chinese revolution, Sun Yat Sen, and the youngest, May-Ling, married Chiang Ka--Shek, the first President of the Republic of China.

Posted by Chinese American Historian By Chance at 7:54 PM 1 comment: