Posted by Chinese American Historian By Chance at 9:14 PM No comments:

What Chinese Immigrants Had To Do To Visit China?

The story of Lou Lin Dock, a Chinese grocer in Coahoma, Mississippi,  illustrates what was involved when a Chinese wanted to make a visit to China and then return. Dock came from Tung How village in Hoy Ping District, China in 1908, entering at San Francisco but a month later he migrated to Lula,  Mississippi to work in a grocery store, Lou John Bros., with his older brother Lou Wing Yim. Yim later moved to a store in Sunflower. Both brothers had wives and children left back in China in the household of Yim’s family.  In fact, Dock had 5 children, 2 by his first wife and 3 by his second wife.  Both wives died at an early age.
Dock moved to Coahama in 1910 where he ran a grocery store, Fong Lee & Co. with a partner, Fong Lee.  In 1913, under the name C. E. Kong, he married a Bertha Quo, daughter of a Chinese father and a colored mother. This marriage produced two sons, and a third child was about to born in 1913, when a huge fire destroyed the store, and its contents including his immigration documents.  The following year he opened the Dock Lee store in Coahama.
In 1918, Dock wanted to take his two young American-born sons back to his native village where they could learn Chinese. They would join Dock’s other five children in China and live with the family of his older brother, Lou Wing Yim. In order for him to be allowed to re-enter the United States, Dock had to apply for return privileges, a process that required disclosures about his family and business background. During an interview with an immigration officer, Dock testified that he was 41 years old, had made no previous trips to China, and he had an investment of $2000 in the Dock Lee & Co. store in Coahama, where he was assisted by Lou Yen.  He further stated that he had done no laboring work of any kind since he came to the U. S. except as necessary in connection with the different stores. He asserted that he planned to return to this business and he provided two white witnesses, as required, to testify on his behalf. 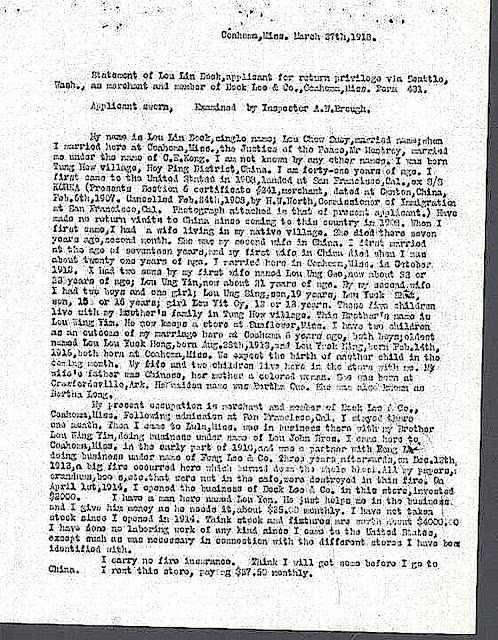 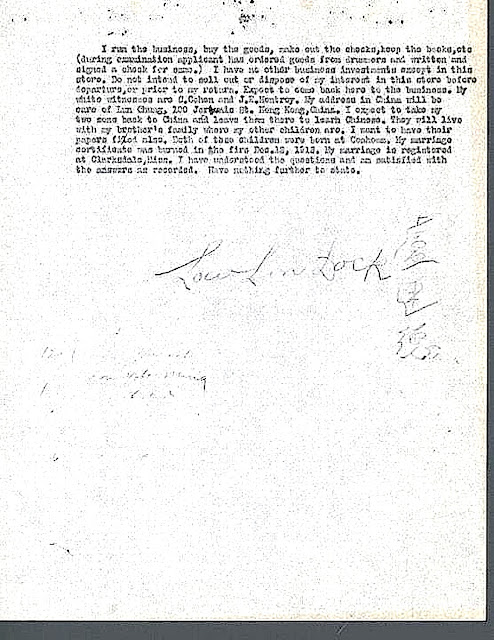 The extension of the 1882 Chinese Exclusion Act in 1892 (Geary Act) for another decade imposed an onerous new requirement in Section 6. All Chinese, even U. S. citizens, had to have in their possession at all times a Certificate of Residence, called 'choc chee' in Chinese, or be deported. An example of a choc chee is shown below. 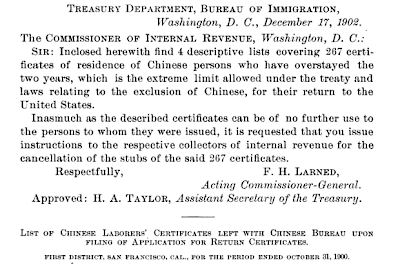 Chinese in the U. S. who did not have a Certificate of Residence were subject to deportation because they were considered illegal immigrants.  After they were apprehended, they received a court hearing and if they had a lawyer, might be able to delay or prevent deportation.  Some, like Wong Yuk, jumped ship just before it was to return him to China.  The poster offered a reward of $20, although it is not clear what you had to do to claim it. 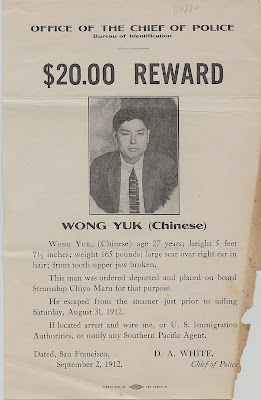 In Dock's case, he would have had a Certificate of Residence that he would leave with the Chinese Bureau when he was leaving the U. S.  When he returned, authorities would check for his Certificate before allowing him to re-enter.

Dock's life in the United States involved operating several grocery stores in different towns in the Mississippi delta, and while the specific details might differ, his story is similar to that of many other Chinese immigrants not only in the South but throughout the country.  He left his family in China, and undoubtedly remitted money to support them.  His decision to have his young children go to China to learn Chinese was not uncommon.  In all likelihood, when they reached adolescence or sooner, he would have brought, or tried to, them to the delta to help him run his store.

Posted by Chinese American Historian By Chance at 7:52 PM 1 comment:

On The Physical Fitness of Chinese Laborers

When southern planters were considering bringing Chinese laborers to work in cotton and rice fields or on construction projects in the late 1860s and early 1870s, they raised questions about the fitness of Chinese for heavy labor.

In Augusta, Georgia, Chinese were recruited in 1873 to expand the canal to generate power for mill operations. A reporter for the Augusta Chronicle asked the labor contractor, Mr. E. L.Rider, in light of the "small stature and effeminate appearance of the Chinamen," just "how they stood on such severe manual labor as that required upon railways and canals."

Mr. Rider, himself half Chinese, replied:
"the effeminance of the immigrants was in appearance only. They are exceedingly hardy and muscular, and have never failed to beat the six footer with the pick and shovel. Physicians who have occasion to see their naked bodies when attending them for injuries are astonished at their firm flesh, and large and well developed muscles."

Anticipating the general belief of Americans that Chinese were "very filthy and abhored cold as the devil does holy water," Rider went on to reassure them:
"Their habits of personal cleanliness, which are always rigidly adhered to, render them less liable to contract disease than many other classes of laborers."

Rider was anxious to introduce the Chinese laborers upon the rice plantation of the coast.  "He is confident that the results... would be a marked reduction in expenses, and a large increase in production...it would force the colored labor of the coast back into the cotton belt of Middle Georgia."

The Chinese acquitted themselves well in their work on the canal, and when that was completed, it is not known what happened to them.  They must have moved on to find work in other places although it seems plausible that some may have remained in the Augusta area, perhaps operating the small grocery stores in the black neighborhoods.  In the Mississippi Delta, Chinese originally recruited to work in the cotton fields did not find that work suited them and some of them also turned to opening family-run grocery stores in black neighborhoods.
Posted by Chinese American Historian By Chance at 3:53 PM 1 comment: