Challenges in Obtaining and Using Census Records of Chinese

Census records are valuable for many reasons. For governments, they are essential for planning.  For historians, demographers, and sociologists, they provide data for research.  And for genealogists, they can inform family histories. But Census records are only as useful as they are complete and accurate or they may lead to faulty conclusions.

Today, most Americans are somewhat familiar with and accepting of the importance of cooperating with census takers.  But in the early years, people were unaccustomed to such procedures and may also have been suspicious and reluctant to answer questions from strangers at their doors.

In 1880, the New York Tribune described some of the experiences in gaining cooperation from residents in answering questions from census enumerators, especially among groups such as the Chinese, many who did not speak or understand English. (Note the often patronizing side comments)

"The Chinese as a class jealously guard against intrusions into their habitations but the Census Commission, however, opened all the doors yesterday. A person unacquainted in the district might easily enough ask one of the Chinamen all the questions and then 10 minutes afterwards, meeting the same Celestial in another house, innocently endeavor to repeat the examination.  They all look alike.  Most of them were dressed in blue blouses and trousers some more black gowns of material resembling cambric;  and others had discarded entirely the blouse for the costume and short hair,  “Allee samee Melican man.”  Nearly all the Chinese live in basements or first floors. If a door happened to be unlocked the proprietor usually appeared with the proprietor appeared with a gruff, “what wantee.”

"Upon showing him the formidable, official looking book, however, and explaining the object of the visit in very “pigeon English,” the callers were invariably treated with distinguished consideration and in many places were escorted through the house. Some places were plainly furnished, most of them were shockingly dirty, and nearly all were pervaded with the sickening odor of opium smoke. Some of the dialogues with Chinamen were very amusing. When asked if they were married, many of them would answer first, “No,” and then qualify the answer by adding, "not married in America, married in China.”  None of them appeared to be particularly lonesome, however, but nearly everyone of them expressed his intention to return to China as soon as he made "plenty money.”

When asked how enumerators were selected to count Chinese, an official pointed out in another newspaper article in 1880 how difficult it was finding people who could speak Chinese. One Chinese-speaking applicant was not hired because he could not write English even though he could speak it. Also, since the district where most Chinese lived also had many white people, he felt that a Chinese enumerator would not be able to get good cooperation from whites.

While his concerns were probably valid, the use of non-Chinese enumerators evoked the same problems counting Chinese. Moreover, they often confused the given and surnames since they are in reverse order to American names and the phonetic transcription of Chinese names was inconsistent. These problems, in addition to occasional poor pensmanship, make it difficult for genealogical and family history research which require names, and not just demographics and counts, of the residents.

Posted by Chinese American Historian By Chance at 5:00 PM 1 comment:

Chinese to the South 3. As Cheap Labor Replacement

A leading labor contractor, Cornelius Koopmanschap, who had earlier success importing Chinese to help build the Central Pacific Railroad made a proposal in 1869 at a Memphis convention of Southern planters to bring Chinese farm laborers to the South to replace black labor lost when slavery ended. He maintained that the Chinese were not only cheaper, but also more reliable workers, but there was also opposition that feared a large influx of Orientals. 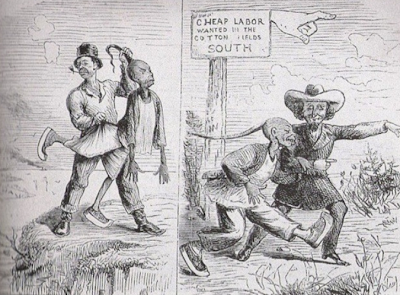 The initial enthusiasm soon waned as Chinese who came did not like to work in the fields, preferring to start their own businesses in grocery stores in the Mississippi Delta and other parts of the South such as Augusta, Georgia. Other Chinese opened hand laundries in many towns in the region.  Competing sources of labor, both black and white, complained about the flood of cheap Chinese labor.
A Savannah Georgia newspaper article in 1869 indicated that another contractor already had orders for over 600 Chinese for the region around Savannah. In 1874, another article confirmed that 14 Chinese laborers had arrived recently and were working in the rice plantations. 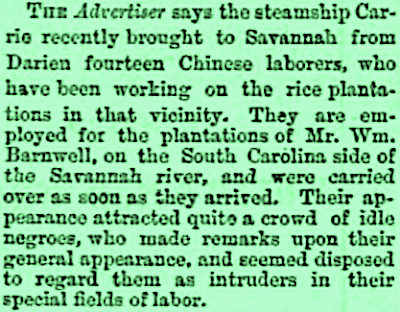 Resentment was evident among competing sources of labor at the arrival of the Chinese.  In 1884, the Chinese in Augusta tried to defuse the tension by denying that the number of Chinese in their city was in the hundreds as the opposition claimed and insisting that there were no more than 30 Chinamen in the area.

The Chinese population in the Deep South up until well beyond the middle of the 20th century was never very large.  Some moved to other parts of the country where there were larger Chinese communities, but other Chinese came to the South from northern states and as far away as California seeking economic opportunities.  In many cases, later arrivals were relatives of the earlier generation recruited to come help in the family grocery stores, laundries, and eventually restaurants.


Posted by Chinese American Historian By Chance at 8:59 PM 1 comment:

Among the many problems faced by immigration officers in processing Chinese immigrants was the language barrier. They did not speak or understand Chinese and most of the immigrants did not speak or understand English.  Hiring Chinese as translators was necessary but the immigration officers were unsure if  they would give accurate or honest translations during interrogations. They worried that some Chinese translators would help a Chinese immigrant pass the interrogation either out of compassion or even bribery.

An extreme example, perhaps, of the suspicion that Immigration officials had of Chinese is found in this 1900 letter in which an official in upstate New York despairs that an "honest Chinaman" interpreter can ever be found, even if we go to Heaven to search for one. 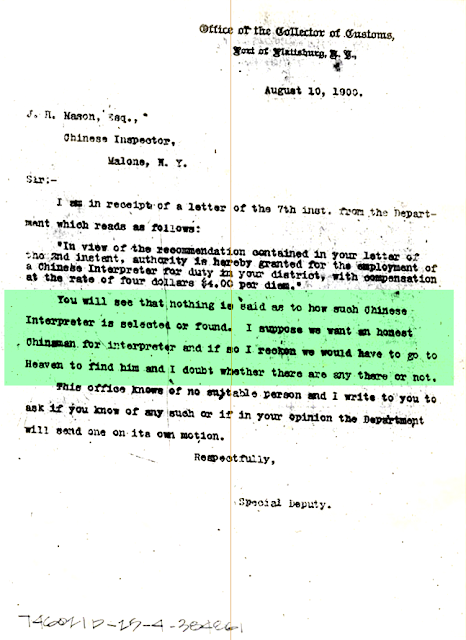 In marked contrast, is the praise a newspaper article heaped upon Chinese children in their native attire, many wearing queues, at the Oriental School in San Francisco in 1908 (at that time Chinese were not permitted to attend white schools).  The journalist fairly gushes over the adorable, intelligent, and polite little Chinese children who show great respect for their teacher.

Today, over a century later, in some respects these opposing attitudes persist. Incoming Chinese immigrants are still looked upon with some suspicion but Chinese school children are admired as model students.
Posted by Chinese American Historian By Chance at 2:25 PM 3 comments: