A Site of Great Significance at 965 Clay Street, San Francisco 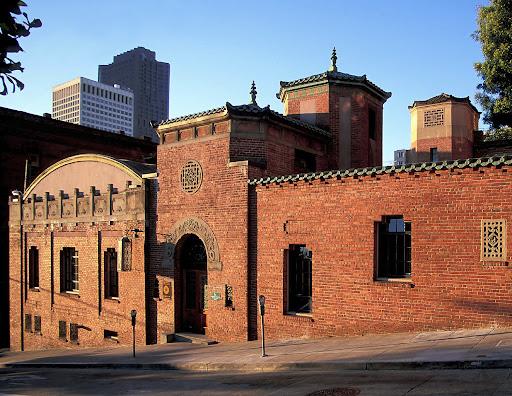 The Chinese Historical Society of America at 965 Clay Street occupies this historic landmark building built in 1932 from the design of noted architect Julia Morgan to serve as the YWCA in Chinatown.

Its significance for the Chinese community of San Francisco goes back much further to around the 1906 quake and fire when the same site (see superimposed image below) was used to build the Oriental School for Chinese and other Asian children who were not allowed to attend white schools. 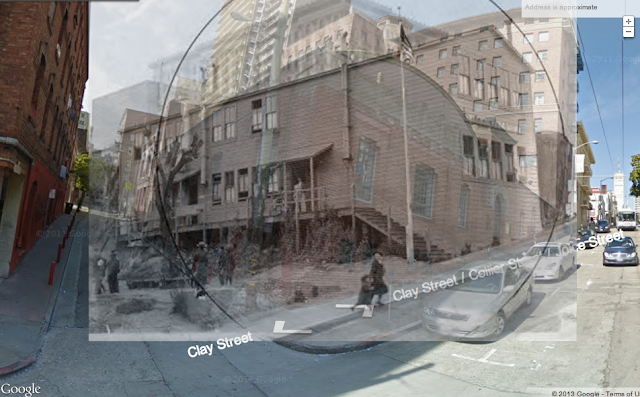 This site was also where a turf battle between Chinese and white youth led to the accidental shooting in 1912 by a Chinese boy that led to the death one white boy as detailed in an earlier post on this blog.


Posted by Chinese American Historian By Chance at 12:20 PM No comments:

Chinese and School Segregation in Mississippi Before 1950

Separate schools existed for blacks and whites in the Deep South for many decades, but where did Chinese children, and others of Asian descent, attend school?
In Mississippi, the State Constitution of 1890 specified that white schools were for caucasians only, a view that the U. S. Supreme Court in 1927 upheld in Gong Lum v. Rice when a Chinese grocer in Rosedale failed to get his two daughters admitted to white schools in 1924.  Consequently, until the late 1940s Chinese in the Delta had to form their own schools with the help of the Baptist church to educate their children although enforcement of school segregation policy against Chinese varied widely in different communities. In some towns, it was rigidly enforced while it was ignored in other towns.
For example, on Feb. 21, 1941 the School Board in Clarksdale denied a petition supported by the Clarksdale Baptist Church pastor and 88 citizens for admission of the 7-yr old daughter, May (Magen) of Henry and Edith Jue to a white school for the 1941-2 school year.  In the minutes of the meeting, Jue was referred to as "Chinaman." Furthermore, his name was misspelled as "Jeel" and the name of the daughter, May, was not specified. 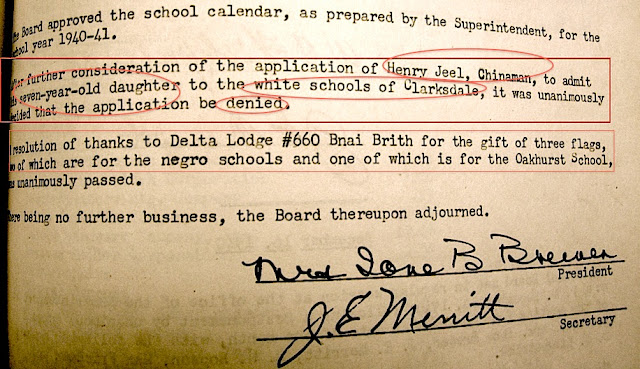 However, on September 3, 1941 the School Board, despite the opposition of 30 petitioners, granted "conditional admission" to a white school for May on the grounds that the Chinese school that she had been attending in nearby Lula had been discontinued. However, the decision was clearly described as "subject to revocation at any time." Mr. Jue's name was still misspelled in the minutes, but this time as "Jeu" instead of "Jeel."

In 1950, fully a decade later, it was still necessary for School Board approval before May's cousins, Chat and Ben Sue, could attend a white school in Clarksdale for the 1950-51 school year.

It must be noted that these inroads were made before the 1954 U. S. Supreme Court ruling against school segregation in the historic Brown v. Board of Education decision.

Times do change, and for the Chinese in the Delta, their status improved substantially since 1941 as they made valuable contributions to their communities over the years. In 2012, the Clarksdale newspaper gave recognition of the breaking of the racial barriers at school by the Jue family, paving the way for other Chinese children in the following years. 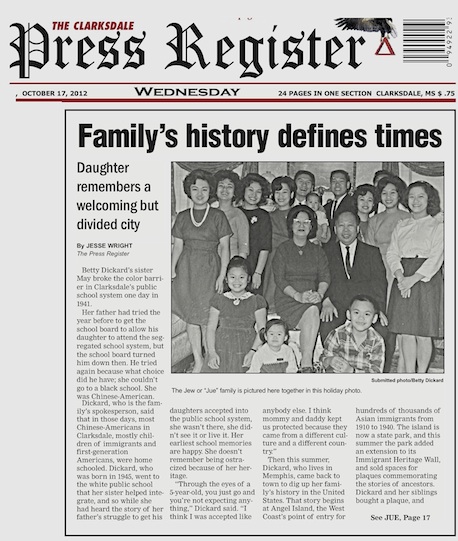 Posted by Chinese American Historian By Chance at 11:38 AM No comments:

Most deportation cases were initiated by federal authorities who brought charges against suspected illegal Chinese immigrants. However, there were also cases where a Chinese would be deported based on a tip to the immigration authorities, usually anonymous, from another Chinese who, perhaps, had some grudge against him.  The letter below in 1925 from the Customs Service of the U. S. Treasury Department notifies the Commissioner of Immigration at Ellis Island that an anonymous informant identified a Chinese without a passport and the address of a laundry where he could be found.  The  hand written note is attached to the letter. 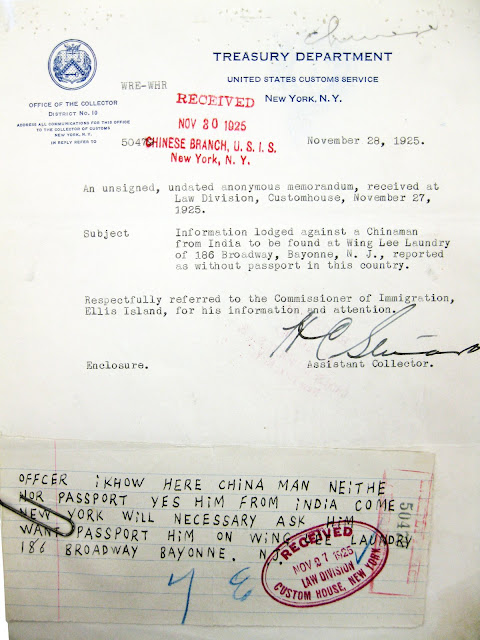 In another case (undated), a Chinese named Charley Sung sent the letter below (translated from Chinese) informing authorities that Ng King in Newark, New Jersey, was not only smuggling Chinese into the country from Mexico but was also dealing opium. One might suppost that the informant was exacting some type of revenge against Ng King.

Interestingly, the translator prefaces the name of the informant, Charley Sung, with the identifier, Chinaman. No further information was found about the outcome of the investigation. 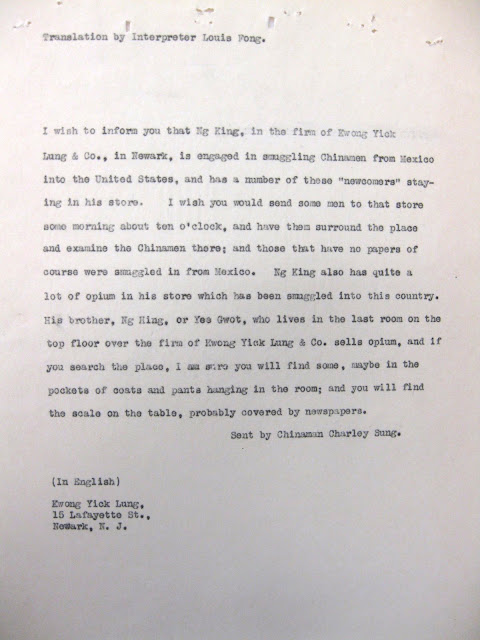 Posted by Chinese American Historian By Chance at 5:51 PM No comments:

Self Deportation By A Chinese Immigrant in 1941

When we think of immigration problems facing the Chinese, what generally comes to mind are the federal barriers, which were formidable and numerous, either preventing entry or prompting deportation.
In addition, there were less well-known procedures that led to deportation of Chinese immigrants. Long before 2012 Presidential candidate Milt Romney advocated "self-deportation" for dealing with the immigration issue, such a mechanism already was available for a Chinese who wanted to be deported!  However, you could not just leave the country but first had to complete an application form for the U. S. Department of Labor.
Consider the case of 85-year old Oung Don You in New Jersey who entered the U. S. at age 14 as a laborer in 1893 but in his old age become dependent on public assistance. In 1941, which was not exactly an ideal time to return to China in view of the war with Japan, he voluntarily filed for 'removal to native country' and was promptly deported. 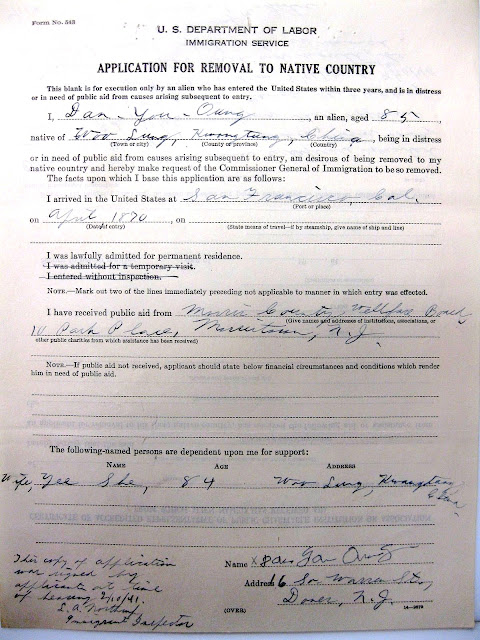 Inasmuch as Oung was destitute, his passage back to China was probably at the expense of the Immigration Service. Perhaps that was why he had to first complete the application form. 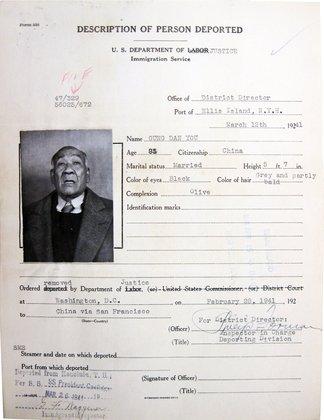 Posted by Chinese American Historian By Chance at 12:45 PM No comments: