A Funny Thing Happened On the Way to My Retirement Home, Chateau Cupertino, June 11, 2011 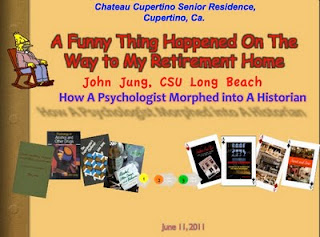 A variant of a talk about my adventures after retiring from college teaching in writing and speaking about Chinese American history that I first presented in April at California State University, Long Beach.  My audience consisted primarily of college students, and some former colleagues not yet retired, in the Department of Psychology. It played well, and served to tell students that they don't have a corner on the life of the mind, and not to dismiss us retirees as 'over the hill' intellectually.
Speaking at Chateau Cupertino (just down the street from a well-known computer company), I faced an audience at the opposite end of the age span, some even older than I, and all in some stage of retirement. I gave essentially the same talk, but the implicit message was different. For some of them, the message was "it's never too late!"  That is, using your life experiences and wisdom, you might have some meaningful things to write about that you could share with others.
Posted by Chinese American Historian By Chance at 4:11 PM No comments: Links to this post

It was a special treat, and challenge, to discuss the history of Chinese restaurants with a 'foodie' audience at a wonderful 'foodie' bookstore rather than a predominantly Chinese audience. A friendly crowd packed the confines of a charming bookstore which allowed eye to eye contact with each person, which was essential since I could not display any slides or graphics to illustrate important points.  One surprise was the unannounced appearance of my good friends, Joe and Liz Chan, each of whom have contributed valuable narratives to my books, with Joe writing about his life growing up in his parents' Oriental Restaurant in Ft. Wayne, Indiana for the "Sweet and Sour" book and Liz sharing memories of her life growing up in her parents' laundry in Louisville, Kentucky, for the "Chinese Laundries" book.  Joe gave me a precious gift that I was honored to receive, a stainless steel serving dish, complete with cover, used in the Oriental Restaurant probably over 50 years ago!
A highlight of the evening was Nellie Wong's recital of 3 of her poems about working in her parents' family restaurant in Oakland, 2 of which she generously gave permission for use in "Sweet and Sour." 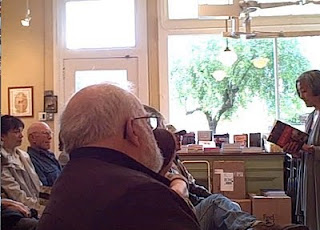 Posted by Chinese American Historian By Chance at 1:37 PM No comments: Links to this post 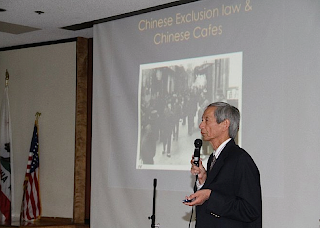 The Chinese Historical Society of Southern California holds its meetings in the historic Castellar Elementary School in Los Angeles' Chinatown amidst many restaurants that feature traditional Cantonese based cuisine, a great setting to talk about the history of Chinese family restaurants. As a member of this vital organization, and well-acquainted with many of its members, I was pleased to share my findings with them.
I had made 2 previous presentations about my other books on Chinese American history; in fact, I can pinpoint the exact moment that I was directed toward researching Chinese grocers in the Mississippi Delta. 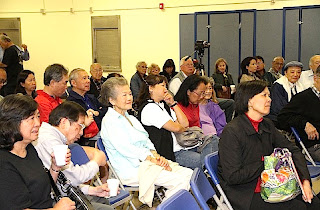 I had just finished talking about my memoir of growing up in a Chinese laundry in Macon, Georgia, where our family were the only Chinese in town.  A former resident of the Delta, Roland Chow, thanked me for my talk, and urged me to consider writing a history of Mississippi Delta Chinese, a topic that I had never considered writing about simply because I did not feel I knew enough about it.  However, with the encouragement of Roland leading me to do some research for several months, I became engrossed with the topic and recognized the urgency for someone to try to write on the subject which had been ignored since the 1970s work of James Loewen, Mississippi Chinese, and Robert Quan Seto, Lotus Among the Magnolias.  Thus,  the idea for "Chopsticks in the Land of Cotton," published in 2008, was born at Castellar School. 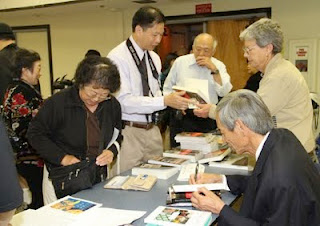 Posted by Chinese American Historian By Chance at 10:26 AM No comments: