It was a delight to be back in Chicago's Chinatown to speak again at the rebuilt, better than before, Chinese American Museum of Chicago.   Chicago Chinatown is  significant to me on a personal level because when I was working on my Ph.D. at Northwestern University I would occasionally take the L train from Evanston to get some 'soul food' from a Chinese restaurant down there.
Posted by Chinese American Historian By Chance at 7:17 PM No comments: Links to this post

Sweet and Sour, Chinese American Museum of Chicago, May 21. 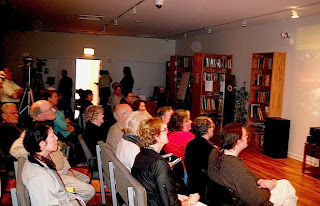 This jewel of a museum in the heart of Chicago's Chinatown is one of my favorite venues.  It has a dedicated and energetic group of volunteers to support its competent staff.  I was delighted to talk about my Chinese Laundries book there three years ago because the classic book on the topic by Paul Siu was based on Chinese laundries of Chicago in the mid-20th century. A few months later, the museum suffered a major fire that shut it down for over a year.  Due to the determination of the people of CAMOC, it was not only restored, but even enlarged.  I was privileged to be able to return there last week to speak about Sweet and Sour, which included some historical facts about early Chinese restaurants in Chicago and narratives from two people who grew up in their families' Chinese restaurants.  One of them, Bill Tong, still lives in Chicago and was willing to make a 'cameo' appearance during my presentation to speak about the history of Tong's Tea Garden, his family's restaurant.
Posted by Chinese American Historian By Chance at 2:35 PM No comments: 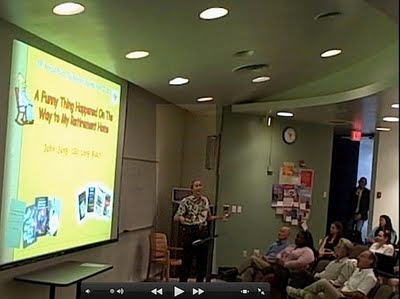 I got a chance to speak about my 'retirement' career at Calif. St. University, Long Beach, the very place from which I retired after 40 years as a professor of psychology.  Instead of talking about the "content" of my four books on Chinese American family businesses, I described the remarkable sequence of events and people I've met that facilitated my success in a field about which I knew very little until I retired from academia. I wanted to impress upon the audience, which consisted of many students, that with a little bit of luck, many contacts, and some moxie, it is possible to have an impact with one's writing and publishing. Over the past 6-7 years, I wrote and published 4 books and gave over 35 talks across the country and once in Canada on the life experiences of Chinese immigrant families in their self-run businesses during most of the last century when racial prejudices denied them employment in many more lucrative occupations and professions.
The "take home message" to students is that life doesn't have to end in retirement if one seeks and embraces new challenges: expect the unexpected!
Posted by Chinese American Historian By Chance at 2:09 PM No comments: