Before the Chinese Exclusion Act of 1882 prohibiting the entry of Chinese laborers to the U. S., thousands of Chinese were recruited by labor contractors, both non-Chinese and Chinese, to come work on railroad construction, mines, lumber camps, and other labor intensive work. It is difficult to underestimate the importance of their role in bringing large numbers of Chinese across the Pacific to work where they did not know the language and customs. Chinese laborers recruited by a labor contractor would be transported to distant sites across the U.S. without their need to know the language, customs, and geography of their work sites.
Below is an ad in 1870 for Sisson, Wallace & Co.,  a general agent company dealing in Chinese goods, groceries, and all kinds of family supplies in San Francisco. It also promoted the recruitment of supplies of Chinese labor in areas of northern California and Nevada, in particular to the Central Pacific Railroad (CPRR).  In 1866, it began to recruit Chinese laborers for the CPRR and was one of the largest contractors. They would hire a Chinese contractor to handle the payments to the workers and arrangements for their room and board. 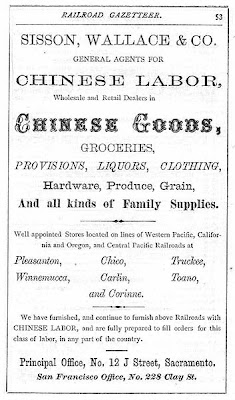 Another prominent non-Chinese labor contractor was Cornelius Koopmanschap, a Dutch immigrant who began recruiting over 30,000 Chinese laborers in 1861 for railroad construction. By 1870 he expanded his business to bring Chinese labor to the South to work on farms and plantations in Texas, Georgia, and Louisiana but his efforts in 1869 to bring Chinese as replacements for African Americans on cotton plantations failed by 1875.  Just before the 1882 Chinese Exclusion Act, he brought several thousand Chinese to work on the Southern and Northern Pacific Railroad construction.

Chinese also served as labor contractors, and having the advantage over whites of being fluent in the Chinese language, were effective recruiters. Ah Quong in Reno, Nevada was an important recruiter who worked with white labor contractors to bring workers for the CPRR.

In the Pacific Northwest, Chin Chun Hock was a very successful labor contractor for railroads and lumber camps, establishing the Wah Chong Company in Seattle. A junior partner, Chin Gee Hee, continued the business until 1888 when he set up his own company, Quong Tuck Company.
Chin returned in 1904 or 1905 to China, where he was the entrepreneur behind South China's first railway known as the Sun Ning Railway Company.  He raised $2.75 million, mainly from Chinese emigrants to other countries.

In central California, Ah Louie (his American name) opened a store in 1874 in San Luis Obispo that had many services for Chinese immigrants.  It was a grocery and general merchandise store that also served as a bank, post office, medical herb shop, and gathering center. 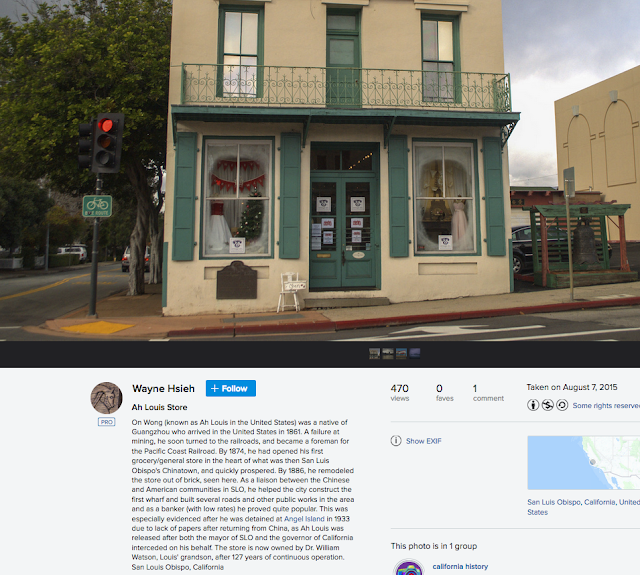 Most importantly, as a labor contractor, he was foreman and employment agent of all the Chinese who worked on the Pacific Coast and Southern Pacific Railroads and later was in charge of recruiting Chinese to work in the quicksilver mines near Cambria. His store building is preserved as California Registered Historical Landmark no 802, one of the last signs of a small Chinatown that is now virtually entirely gone.  Recently, archeologists have found Chinese artifacts on the site.

Posted by Chinese American Historian By Chance at 8:28 AM 2 comments: 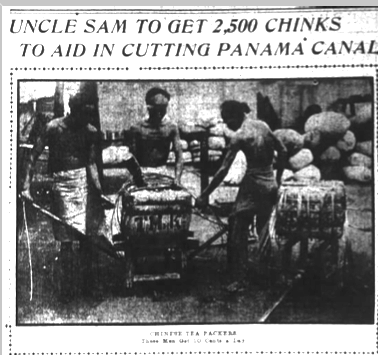 Chinese laborers were recruited to provide cheap labor in many parts of the world in the 19th century including Panama when railroads and the canal was built at the turn of the 20th century. A 1906 Atlanta Constitution article explained the procedures and policies for recruitment, treatment, and payment of the 2500 Chinese initially wanted to help dig the Panama Canal.

The tenor of the article is that the U.S. will be careful to be truthful in their recruitment procedures, making sure that each recruit fully understands the nature of the work, the living conditions, and what they will be paid. 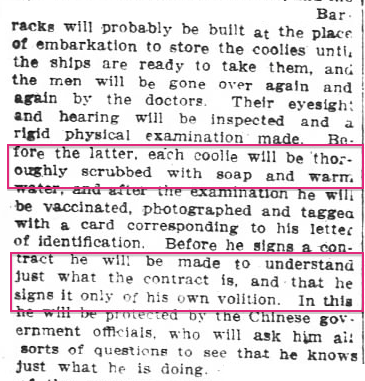 However, the statement that each coolie will "be thoroughly scrubbed" suggests a condescending attitude that may indicate the men will not be accorded respectful treatment in other ways. Indeed, the preparation for their medical exam involves 100 men at a time coming into a hall "clad only in a piece of string and his paper tag." 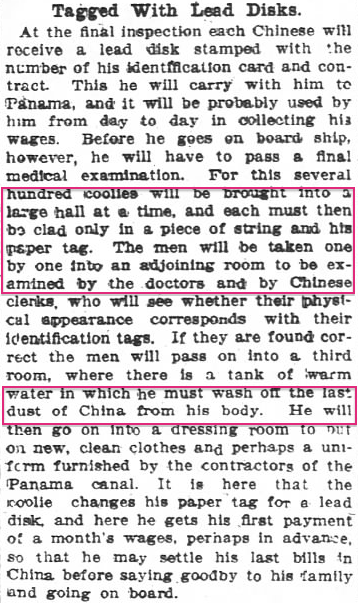 The article describes and justifies the very low wages that will be paid on the grounds that they will make more than they would if they stayed in China. It also expressed concern about bringing too many Chinese because of their propensity to form unions, and the danger of strikes occurring which would impede the building of the canal.

Posted by Chinese American Historian By Chance at 8:11 PM No comments:

Chop-Chop's Makeover: From Sidekick and Cook into Bruce Lee

There have been changes over time in the media portrayal of Chinese, with more positive representations finally emerging.  In the past, Chinese might be portrayed like Hop Lee, a subservient houseboy who fawned over his employer on one hand, and on the other extreme, like Fu Manchu, evil incarnate, out to conquer the world.  Then by mid century they were replaced by the sagacious yet still inscrutable, detective, Charlie Chan. Next he was depicted as the brainy computer nerd by the 1960s.

These changes involved replacing one stereotype with another; they did not involve changes within a specific character. A striking instance where a fictional character was rewritten drastically to reflect changing social attitudes was with Chop Chop, the token Chinese comic relief companion of the Blackhawk fighter squadron, a 1940s forerunner of the  "Magnificent Seven."

Throughout the 1940s and well into the 1950s, Chop-Chop was used to provide comic relief in the Blackhawk comic  book where  artist Reed Crandall depicted him as a somewhat emasculated caricature.  Chop Chop is chubby, buck-toothed, wears a queue tied with a bow, and wears coolie looking clothes.  Speaking sing-song English, his gibberish is nonsensical or undecipherable.   An offensive racist stereotype by current standards, it was an accepted and typical of depiction of Chinese and other Asian males until beyond the middle of the 20th century.

Primarily serving as Blackhawk's sidekick, Chop Chop flew on combat missions in the back seat of a fighter plane piloted by the squadron leader, Blackhawk, presumably because he did not have the skill to fly his own plane.  In hand to hand combat, while other members of the Blackhawk crew, all of European heritage, fought with hand guns, Chop Chop rushed into the fray armed only with a meat cleaver (after all, he was the group's cook). 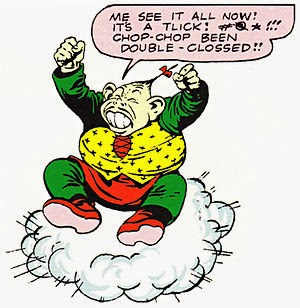 With changing times and more favorable attitudes toward Chinese after World War II,  Chop-Chop was "promoted" and even featured in his own comic, Chop Chop, from 1946 to 1955.

In 1952,  he became cast as a full member of the team, and from 1955 to 1964, he was a more realistically drawn character. However, in the 1980s revival of the series, Chop-Chop was "demoted" wearing a variation of his original outfit (even clutching a meat cleaver on the cover of the first issue).

When it was decided to portray him as proficient in martial arts, perhaps due to the popularity of Bruce Lee, Chop Chop was renamed, Liu Huang.  In the 1960s, Chop Chop (now Dr. Hands) endowed with beryllium-encased hands, could "smash through practically anything."  By the late 1970s, channeling Bruce Lee he was recast as a Chinese master of martial arts as well as the team's most skilled flier, "save for Blackhawk himself." In the 1980s he was no longer named Chop Chop, but Wu Cheng, a martial arts master. 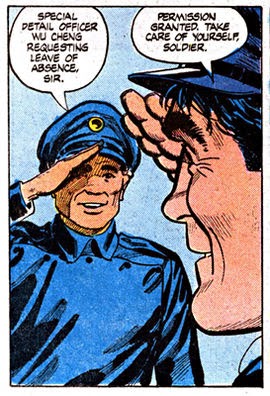 In the late 1960s he achieved the rank of Lieutenant, and is not only a master pilot but also a skilled mechanic.  Despite these achievements, he was still providing his skillful services as a cook. Some stereotypes may never change!

Source: http://en.wikipedia.org/wiki/Blackhawk_(DC_Comics)
Posted by Chinese American Historian By Chance at 1:28 PM No comments: