A Chinese laborer, Jung Ah Lung left the United States for a visit to China after obtaining a Customs certificate needed to gain reentry. When he returned, however, he was unable to present the certificate, saying that pirates robbed him in China. The Customs Collector denied his reentry, forcing him to stay on the ship in San Francisco bay despite the availability of a detailed description of his physical features in the Customs books and the support for his case by affidavits and other testimony supplied by a missionary in China, a United States Consul, an Oakland editor,  the Chinese Mission, and by other circumstances. 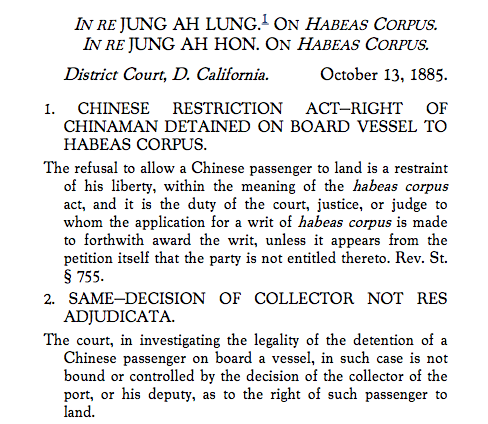 "In Re Jung Ah Lung" was an immigration case of major significance especially for Chinese immigrants during the early period of the Chinese Exclusion Acts, and for constitutional law relating to due process. The U.S. Attorney and Collector of Customs, sought to prohibit Jung Ah Lung from returning to the U.S. insisting that only official documents issued by federal immigration authorities, such as the "Return Certificate," were acceptable as evidence of U. S. residency.

The Court allowed that the Collector of Customs under Section 9 of the 1882 Chinese Exclusion Act had the power to require returning Chinese laborers show a valid Certificate of registration.

However, Judge Hoffman noted, "But the section affords no color to the extraordinary pretension that the result of that examination shall be final and conclusive upon the rights of passengers."
He sided with the immigrant, holding that regardless of the Exclusion Act, a Chinese person claiming U. S. residency should be entitled to the same benefits of habeas corpus, and due process in presenting relevant evidence in court, as "any other human being in this country." Hoffman's position was appealed and upheld by the U. S. Circuit and U. S. Supreme Courts.

However, the victory for the Chinese was short-lived as this precedent for all immigrant rights to receive due process in court lasted only 20 years.   In 1904-1905 Ju Toy, a Chinese cook in Oakland, California was denied the right of habeas corpus to appeal denial of his reentry even though he presented his Certificate of Registration.

In the Ju Toy case, a U. S. District Court ruling initially favorable to the immigrant was reversed upon appeal in the U. S. Circuit Court (San Francisco) and then the U. S. Supreme Court. After "In Re Ju Toy," "due process" for ALL U. S. immigrants was limited to appeals within the executive branch, except when there was a claim of unlawful or arbitrary actions by immigration officials. Aliens and alleged citizens could no longer count on their "day in court" to contest the impact of immigration bureau decisions denying their right to be in the U. S.

Posted by Chinese American Historian By Chance at 8:24 PM No comments:

Two Quite Different Cases, But Both Had Bad Outcomes for Chinese

Strong anti-Chinese sentiments were prevalent throughout the U. S. and Canada from the mid 19th to mid 20th century. Two examples illustrate the variety of contexts where Chinese faced unfair barriers to opportunities that were afforded to non-Chinese.

In 1892 the Chief of Public Safety in Pittsburgh, confronted by the problems of policing criminals of different nationalities, decided to appoint Yee Din, a Chinese as a policeman. Having a Chinese police officer, he thought, might be more effective in dealing with the Chinese population. Known as Jim Blaine, Yee was prepared to renounce his citizenship and allegiance to China and become a naturalized citizen of the United States, a condition for being a policeman. 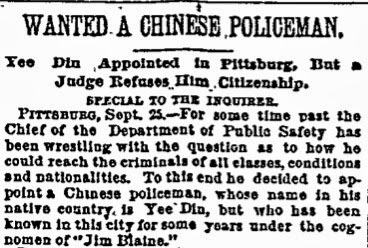 Although Yee was deemed qualified to serve as a policemen, a judge, not ready to accept a Chinese in this capacity, denied his application.  Thus, "Chief Brown's idea to get at the Chinamen who violate the law ended and Yee Din did not become Pittsburgh's first Chinese policeman.

A second example comes from Canada over a quarter of a century later during Prohibition in 1935.
Suffering financially from the depression, the hotels in Saskatchewan lobbied successfully to get the right to sell beer by the glass.  Historian Joan Champ noted there were Catch-22 legal barriers against Chinese during Prohibition that excluded Chinese hotel owners because the law called for liquor license applicants to be restricted to people who were entitled to vote, a right that was denied to Saskatchewan Chinese until 1947. Thus, being unable to vote, Chinese hotel owners could not apply for a liquor license.
Posted by Chinese American Historian By Chance at 1:17 PM No comments:

Today, we rely heavily on electronic methods to communicate across space, but a century ago, written documents and letters sent by mail was the primary means of communication across distances.  If only we had an archive of these documents, we would have a rich source of for historical analysis.

For example, two collectors in the Cariboo District in British Columbia have created a website which they call a 'virtual museum' of pioneer North American Chinese. On this site, they show some of the fascinating Chinese artifacts, ephemera, and collectables they have gathered from around the Province that are probably similar to those found across North America. Many letters, or at least mailed envelopes, are part of the collection. A few examples are shown below. 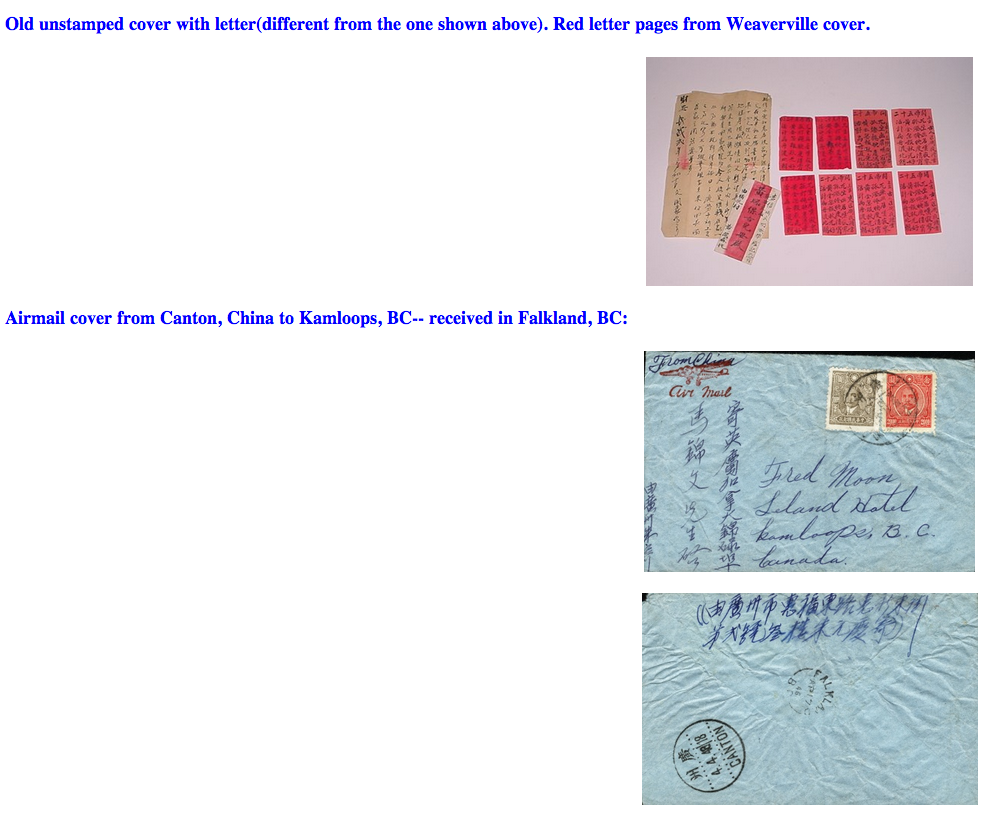 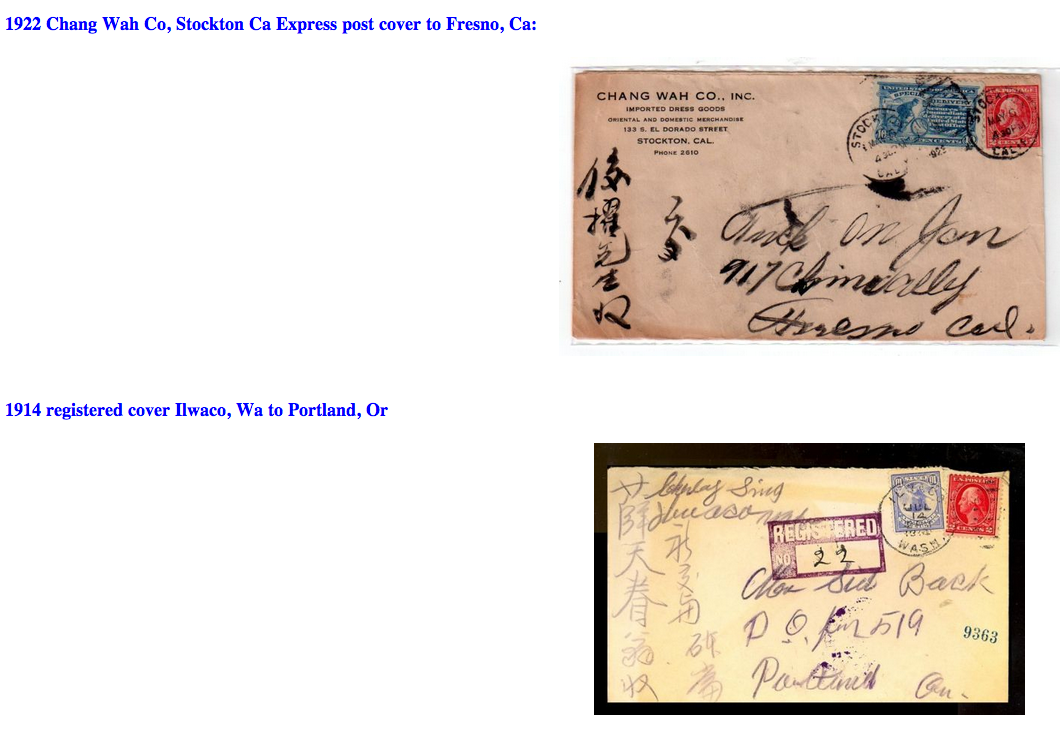 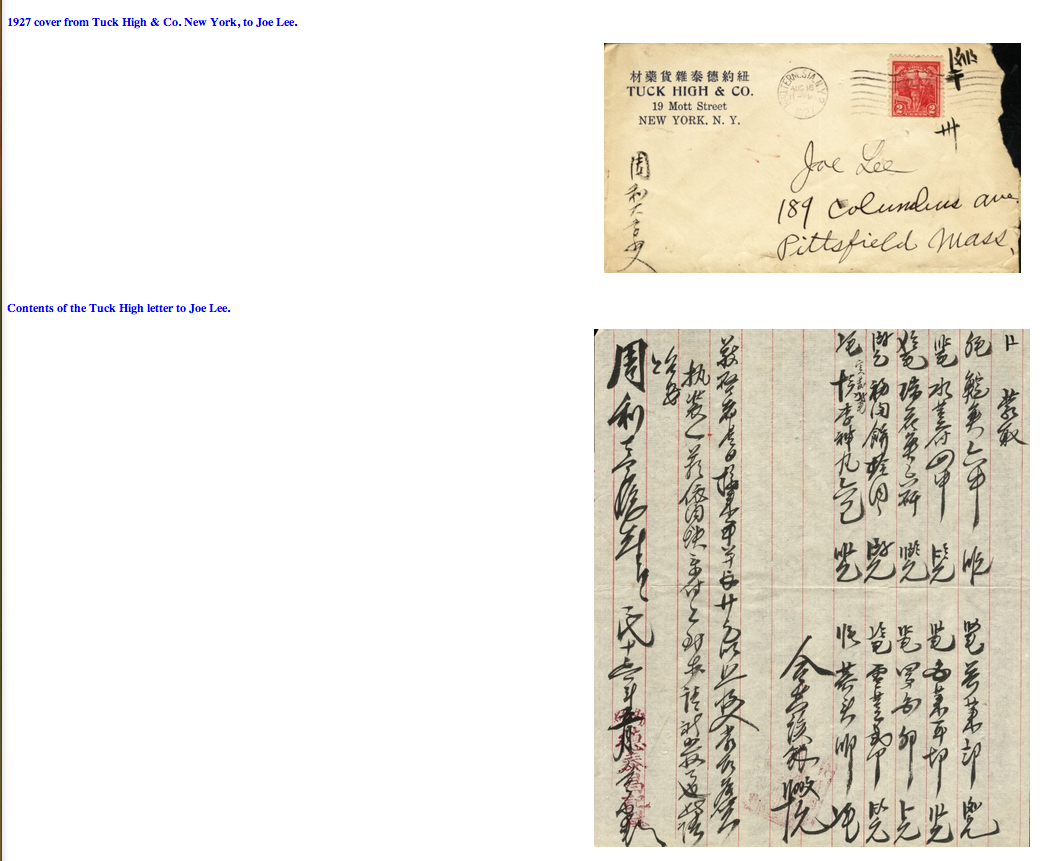 The Chinese American history posts on this blog are not "philosophical" essays by any stretch of the imagination, so the present post may come as a surprise.  Given that last night, New Year's Eve, was an evening when most of us did a bit, maybe too much, celebrating (of what?), today on January 1, 2014, I wonder what will become some of the 2014 additions to Chinese American history.

One intriguing question is what exactly defines a "Chinese American?"  Compared to  the distant past, say, the 1930s, the variety of people who could be categorized as, or call themselves, "Chinese Americans" has become considerably more varied as the "face" of Chinese in America has changed greatly since the liberalized 1965 immigration law. 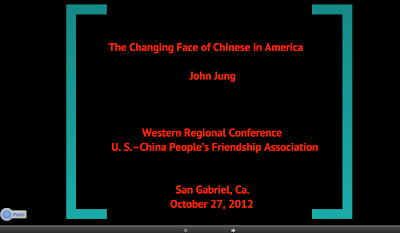 Accordingly, one might think the content of Chinese American history would be more varied to reflect the subgroups of Chinese coming from different parts of China and other parts of the world. Compared with the earlier immigrants from Guangdong, mostly poor and less educated, many of the recent immigrants from Taiwan, Hong Kong, and some parts of mainland China are wealthy educated professionals while there are also the Fujianese immigrants at the other end of the ladder. These groups are arguably all Chinese. To what extent do these groups interact with each other socially, politically, culturally? How well do they get along with each other, how much are they aware of each other? Why or why not? My observations suggest they do not mingle much and may even not feel much respect toward each other.

Yet, my sense is that many non-Chinese are unaware of these differences and generally see all of us as Chinese or Chinese Americans.  There are many social, political, and psychological aspects of these differences that should be researched, but don't yet seem to be adequately reflected in the historical analyses of Chinese America.  We may all "look the same" to outsiders, but looks can be deceiving.

A different, but related issue of importance, is the relationship between Chinese in China and  Chinese in America, especially those born or long time residents in the U. S.  Although the Chinese in America and those in China are worlds apart in many respects, many non-Chinese tend to see us as members of one large group, Chinese.  And, while most American Born Chinese (ABCs) and even some Fresh Off the Plane (FOPs) and older Fresh Off the Boat (FOBs) experience some pride in many aspects of China's improved world status, we recognize that many policies and practices of Chinese in China are deplorable and dangerous.  And, what is worse, is that as U. S.- China relationships go, so will the way that we Chinese in America will be treated, or mistreated. If you doubt, just recall what happened to Japanese Americans after Pearl Harbor. History is known to repeat itself.

The important impact of history can also be seen in our daily personal lives.  Many of us of a certain age have or had parents who were immigrants from China who came during the Great Depression and lived during World War II, and the Cold War, etc.   A"generation gap" existed between them and us that involved differences of values, facility with English and Chinese language, etc.  Now we have grown up, and most have become parents, (and for many, grandparents), we can see that there is still a "generation gap" between us and our adult, or adolescent, offspring but it is qualitatively different from the one that existed between us and our parents. Why? Because the historical era during which each generation grows up is typically quite different.  My parents grew up in difficult times in China while I grew up during the prosperous post WW II boom times.  My children, in turn, grew up in the 70s and 80s, which were markedly different from the 50s.

This is a long-winded way of raising this question.  How was the relationship that you had with your parents different from the one you have (had) with your children? Implicit in this comparison is the impact of history.  That is, what was going on in the world when you were growing up is quite different from the world in which your children grew up.  History tries to explain the past, but not always accurately, since it gets rewritten occasionally, but my real question is whether we can use history to predict Chinese America in 2014.  I'll let you know what I think next January 1.
Posted by Chinese American Historian By Chance at 11:37 AM No comments: