Are You Looking in the Right Place for Your Chinese Immigrant Ancestors?

As people get older, their drive to find out more about their origins in China increases. But finding records and information about earlier Chinese immigrants to the United States can be daunting and unsuccessful for many reasons, not the least of which is looking in the wrong place.

While it seems natural to search for immigrants who entered on the west coast, especially San Francisco or even Seattle, there were a fair number of Chinese who crossed either the northern border from Canada or the southern border from Mexico in the days when these borders were more porous.

Using familysearch.org, a search was made for three fairly common Chinese surnames, Wong, Chin, and Yee, to see how many of them entered the U. S. from Canada between 1895 and 1956 and from Mexico between 1903 and 1957.

The figures below are inexact as a few Wongs, Chins, and Yees might not be Chinese, but probably most were.  In contrast, many of the Lee immigrants crossing both borders were not Chinese as Lee is a name for some nonChinese so it isn't possible to give a count without examining each case individually.

Two sample displays for CHINs from Canada and from Mexico below illustrate some of the information available on an immigrant in the database. 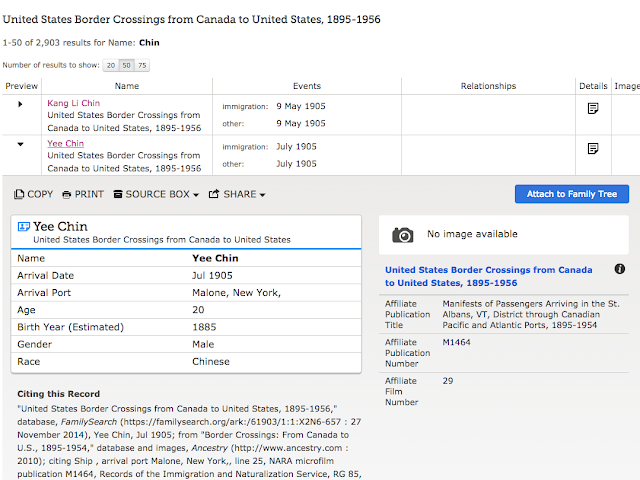 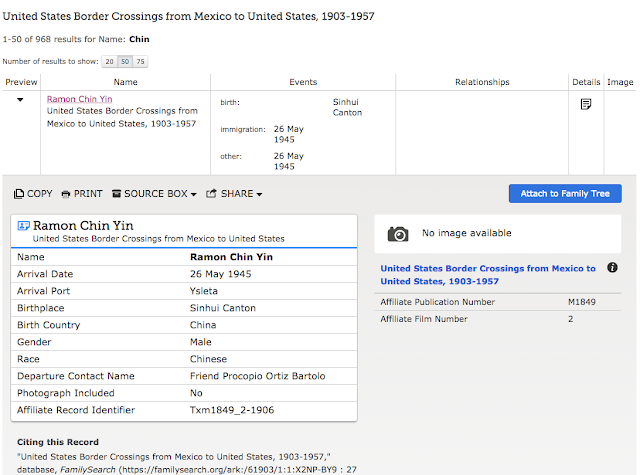 In conclusion, the point is not to compare how many Chinese with these surnames came from Canada and Mexico, but to suggest that if you can not find an ancestor on U.S. databases, try looking both north and south of the border because a good number of Chinese came across these borders, especially if they were illegal immigrants.
Posted by Chinese American Historian By Chance at 4:54 PM No comments: Links to this post