News about Chinese immigrant men that involved opium, smuggling, gambling, and sexual liasons with white women were sensational stories in the popular press from the late 19th well into the 20th century. When a Chinese merchant, Charles Sing, was murdered in Chicago in 1913 in an apparent robbery, a larger story unfolded. During their search of his living quarters,  police found a “black book” listing agencies for conducting opium sales that apparently belonged to a Chinese official involved in a smuggling ring. It contained records of Chinese smuggled across borders into the United States. Police think that the network of cities comprises a tunnel for hiding the smuggled Chinese. 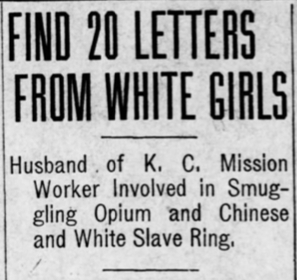 In addition, they discovered more than 20 letters signed by white girls that led police to believe they had uncovered a “white slavery ring.”  The newspaper report failed to describe what the letters contained but suggested the contents would lead to convictions related to the Mann white slave act. One of these letters was signed by Emma Davis, the sister of Mrs. Alice Sing, the white wife of the dead Chinese merchant, currently in a hospital unable to speak due to some type of “hypnotic paralysis” or self-inflicted spell. Her father said his daughter worked in a Chinese restaurant in Kansas City, which led her to become interested in Chinese through work at the mission in Kansas City Chinatown where she met Charles Sing, married him, and moved to Chicago with him. 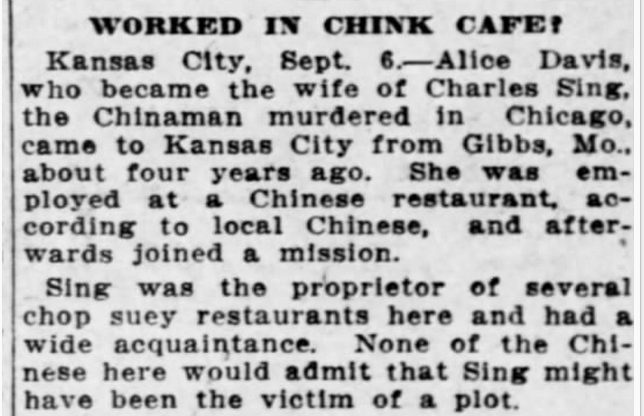 Posted by Chinese American Historian By Chance at 4:06 PM No comments: