Mixed race marriages between Chinese and whites were regarded very negatively until well after the middle of the last century because of the strong prejudices against Chinese.

Of the few marriages of Chinese men to white women in the late 19th century in New York, most were to Irish women, exceeding those to Chinese women by a ratio of 8:5 partly because there were so few Chinese women in America.

Irish were considered white, but they at the low end of the socioeconomic ladder as were the Chinese. Whereas Chinese men had few opportunities to marry Chinese women, Irish women had many Irish men as potential husbands but some of them preferred marrying Chinese than Irish men.

As suggested in a cartoon in the British magazine, PUCK, Irish women could count on a Chinese husband (Ching-A-Ling) to be a good housekeeper who could do the laundry and entertain any children whereas if she married an Irish man, she would have to support a lazy husband. 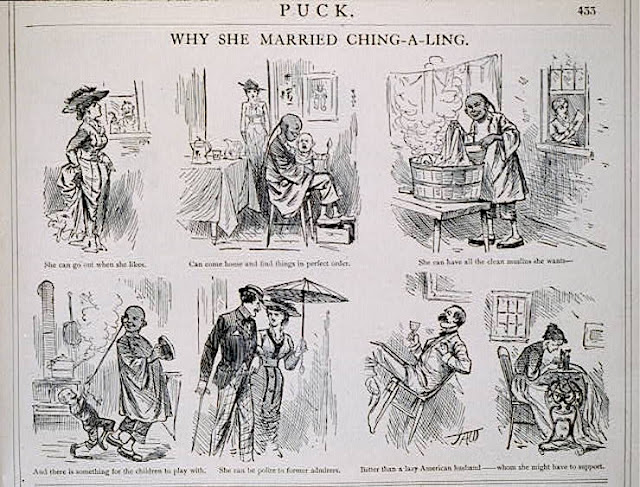 Mixed Chinese-white children were seen as half-caste and looked down upon.