My Ancestor Search Leads To News of Chinese Jugglers U.S. Tour in 1850s

“Every migration story starts with person one leaving a place for another place.”

Scott Tong, A Village with My Name: A Family History of  China's Opening to the World

Many people outside the Deep South are curious when they learn that I, a Chinese, was born in Georgia in 1937 when Jim Crow racial discrimination was still strong.  They wondered why I was there and how Chinese fit between the blacks and the whites. I usually ignored their questions, preferring to deal with my life in San Francisco and Chicago, where I lived after leaving Georgia in 1952 at age 15.

But after I retired, I became intrigued about more details of my family history, I knew that my father went directly to the South when he emigrated in 1921 from his village in Guangdong, China because one of his grand-uncles, Gan Heung Loo, recruited him to work in a laundry in Chattanooga, Tennessee, where he stayed until 1925. But was this grand uncle my first ancestor to leave China for the U.S. and what led him to Chattanooga? Did another relative urge him to come there just as he sponsored my father to join him?

In my research, I discovered that two Stanton brothers from Boston started to build the Alabama and Chattanooga Railroad in 1870 to connect Meridian, Mississippi, with Chattanooga, Tennessee, 300 miles to the east. I immediately wondered if this railroad could have had something to do with Gan Heung Loo being in Chattanooga.

A labor contractor, Cornelius Koopmanschap, sent 1,500 Chinese from California in 1870 at their request. Other Chinese may have come from Texas after working briefly in 1870 on the Houston and Texas Central Railroad. However, before a year passed, the Alabama and Chattanooga Railroad was bankrupt and the Chinese workers were not paid, and quit.  (A side note is that about 80 of these Chinese were hired by a Confederate cavalry general, Nathan Bedford Forrest, (also a slave trader, and the first Imperial Wizard of the Ku Klux Klan), to work on construction of another railroad in the area, the Selma, Marion, and Memphis Railroad in 1870-1, but this venture was also a financial disaster).

Is it possible that at least one of these Chinese railroad workers stayed in Chattanooga after the Alabama and Chattanooga Railroad construction abruptly ended in 1871? Is it likely that he might have opened or worked in a laundry there? Business directories listed several Chinese laundries in Chattanooga in the late 1870s. Is it possible that Gan Heung Loo, my father’s grand-uncle came to Chattanooga because he knew one of these railroad workers?  Perhaps Gan Heung Loo worked in a laundry and later helped my father learn the laundry business when he came over in 1921. Was Gan Heung Loo the “first ancestor” in my family tree to come to the United States?  I may never know, but it seems within the realm of plausibility?

Although I did not find any clear answer about my family history in the South, in the course of searching I was surprised to stumble upon notice of a well-received performance by Chinese jugglers, (misspelled as jugglars), in 1857 in Montgomery, Alabama. 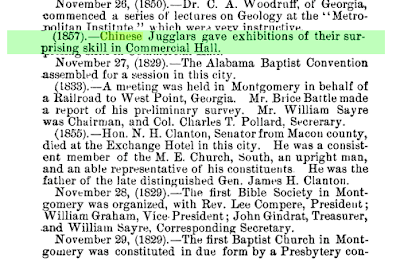 Why were jugglers from China in Alabama to perform, especially as early as 1857, when most Americans beyond the western states had never seen Chinese people?  More research showed that the jugglers gave many performances which impressed American audiences along the Atlantic seaboard and in the South during the 1850s and Montgomery was not the sole performance. 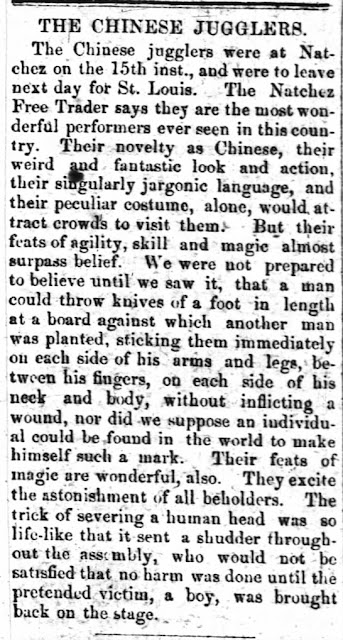 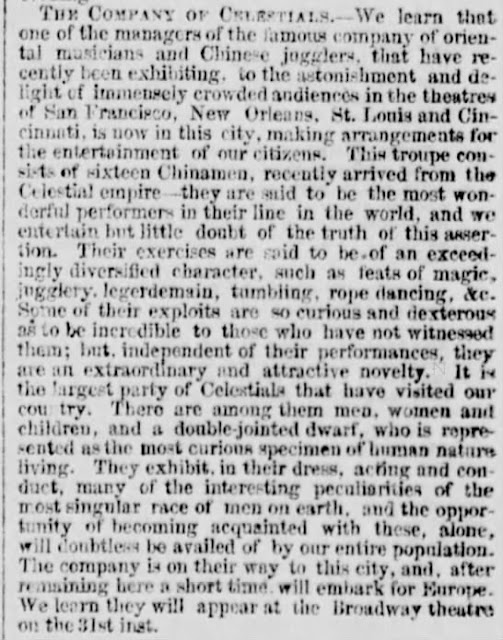 Still, some found fault as in some derogatory comments in the New York Tribune, which were reprinted in papers across the country such as one in Griffin, Georgia. The focus was not on the juggling skill, but of the small physical size and unappealing facial features of the Chinese men. The critic, however, approved of the Chinese women, with their "amiability and gentleness, round, graceful, and well-developed forms.” It was concluded that the likelihood if China to “our standard of civilization” was unlikely for another thousand years.

Even though it was 1853, when there was a small Chinese population, mostly in the west, derogatory stereotypes and sarcastic depictions of Chinese were being disseminated in the New York Tribune. 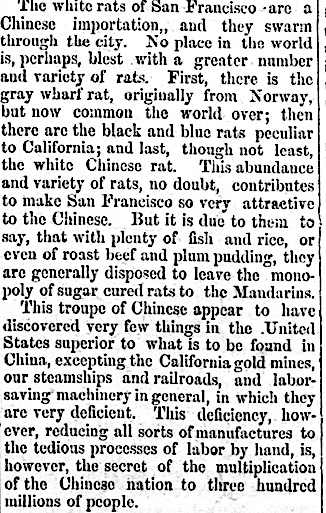 One lesson from this unexpected detour from my quest to learn how my father came to the South is that historical research often works in mysterious ways!


Posted by Chinese American Historian By Chance at 9:27 PM No comments: Links to this post

A Granddaughter's Tribute to Her Grandfather Who Came to U.S. at Age16

When she was a senior at Colgate University in 2009, Jessica Chow, created a
touching 4-part video about her grandfather who emigrated to the U.S. in 1934 at age 16 as a paper son. Finding America in China, her account of his life story first working in a laundry near New York Chinatown and later fighting for the U.S. in WWII is detailed and could easily apply to the life stories of hundreds of other Chinese immigrants of the same era. Jessica's video included many images of official immigration documents as well as personal photographs, which make her films more informative and engaging.

Chow also presents an interesting discussion about the Chinese soldiers serving in the 14th Air Service Group, which supported the famed Flying Tigers. Although they were "ethnically" Chinese, whether they had emigrated from China or were born in the U.S., as soldiers they were "Americans" fighting to help China.  She concluded that most of them had stronger identities as "American," despite the extreme racial prejudices Chinese suffered in the U.S. prior to WWII, because of their military service for the U.S. 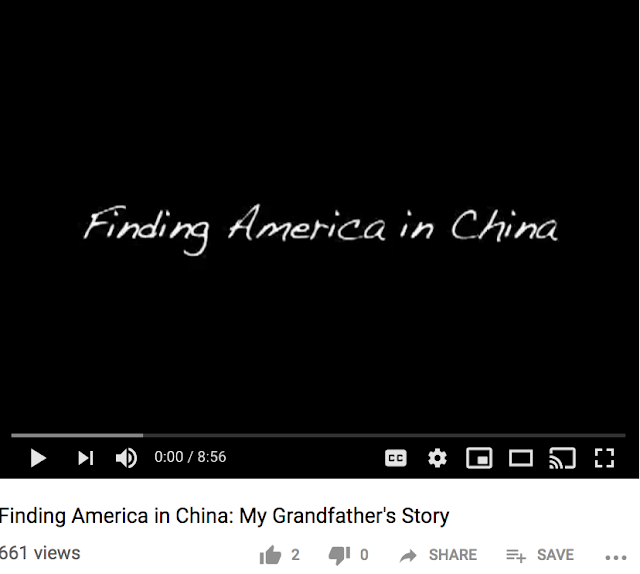 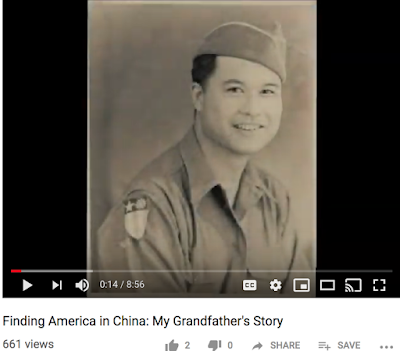 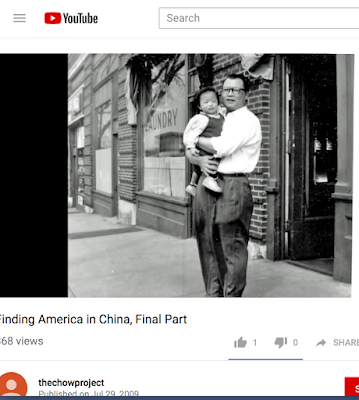 Posted by Chinese American Historian By Chance at 11:07 AM No comments: Links to this post