How Chinese Exclusion May Have "Created "Marital Problems

Chinese men who emigrated to North America in the late 19th and early 20th century seeking work were mostly unmarried or had left their wives, and in some cases, children in China.  Many hoped to strike it rich and then return.  However, most barely earned a living and could not fulfill that dream.
The threat of cheap Chinese labor to white workers led to the Chinese Exclusion Act of 1882 that was eventually extended for decades until 1943. It prohibited the entry of Chinese laborers although it did admit Chinese merchants.  In addition, this exclusion created a huge problem for Chinese laborers already here because they were not allowed to bring their wives and families over.
Consequently some Chinese managed to enter arranged marriages to American born Chinese, often many years younger than themselves and often still adolescent girls. Others entered marriages with non Chinese women.  In some cases, men already had a wife as well as children back in China but their imposed separation led them to enter new marriages in the U.S. and Canada.
Some of these marriages proved workable but an unknown percentage of these marriages were foredoomed to fail due to many factors including age differences and cultural conflicts and often difficult financial situations as illustrated by two examples reported in 1910.

The dubious distinction of being the "first Chinese woman divorcee" was ascribed to Mrs. Josie Hung whose marriage to a wealthy Denver Chinese, W. Q. Hung had been a "May and December" marriage arranged by her parents for the price of $750 when she was only 14 years old and her husband was 20 years older. 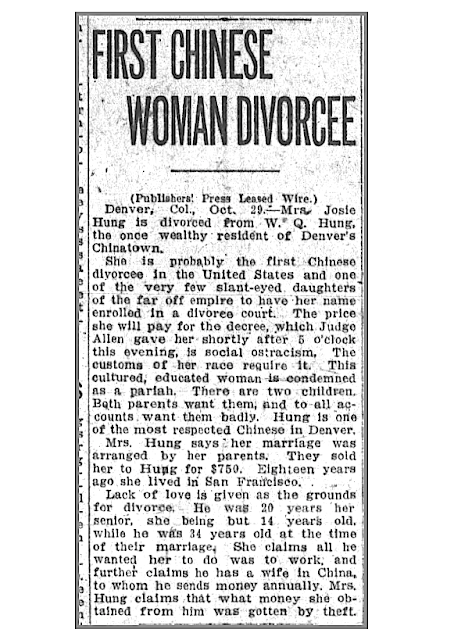 In another example a Chinese doctor, Wing Lee, married a Norwegian woman, but after six year it proved unworkable due to their differences about what kind of food he should provide for her. The wife, age 41, claimed Dr. Lee, age 73, had not given her enough money for food but he claimed he provided her with sufficient amounts of Chinese foods and he should not have to provide money for butter and other foods that "Chinese do not relish."  She was recently jailed for five days after she stole $100 from another Chinese to buy American food because she said her husband was starving her.
The newspaper headline for the article describing their marital conflict proclaimed, "Chop Suey? Not for me to eat, says white wife."  The judge ruled that Dr. Lee must provide his wife with "substantial food such as white people eat" or else pay her $4 per week, 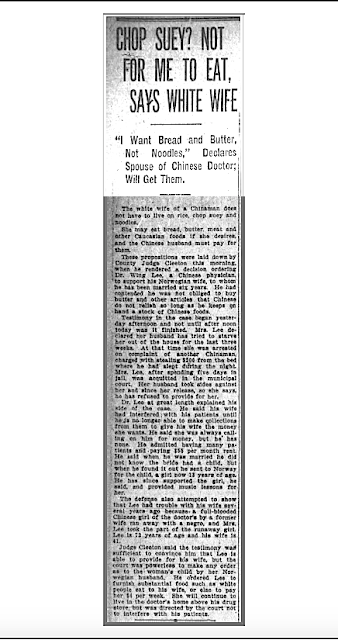 Posted by Chinese American Historian By Chance at 5:54 PM No comments: Links to this post

In the late 19th and first half of the 20th century, there were Chinese immigrants scattered across small towns across the country. They lived in cultural and social isolation unlike Chinese in or near Chinatowns of larger cities.
Not much is known about the lives of these Chinese living beyond Chinatowns, mostly bachelors or married men separated from families back in China by the Chinese Exclusion Laws started in 1882.
Census records and city directories provide some limited information about where and when they lived and how they earned their living.  Most Chinese during that period operated hand laundries, and some eventually moved into running small restaurants.
A richer, but still limited, picture of their lives can be found in newspaper articles as shown below for North Carolina.  Newsworthy topics included advertisements for laundry services, announcements of the opening, relocation or closing of a laundry, stories about the relationship between the community and Chinese, reports of deaths, assaults, homicides and robberies of Chinese, conflicts among Chinese, and success stories about some of their children. 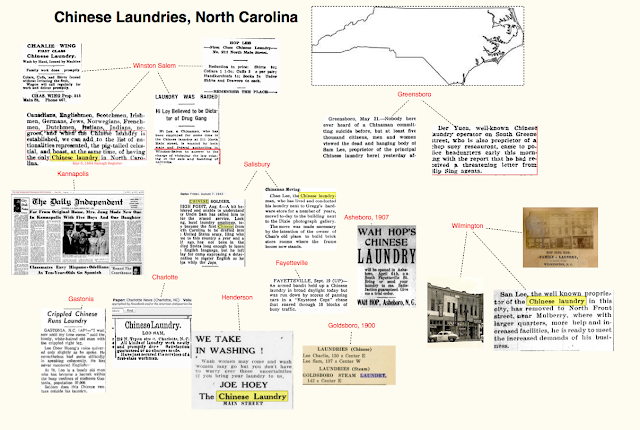 Posted by Chinese American Historian By Chance at 4:41 PM No comments: Links to this post

A Clever Chinese Tunnel Break-in of a Portland Bank Vault

In 1890, Ah Jung, a clever Chinese crook hatched a scheme of tunneling beneath the First National Bank of Portland to drill into the bank vault to steal its treasures. Ah Jung recruited the aid of   Chuey Gum who ran a laundry across from the bank with promises of gold for him and the laborers in Chuey Gum's laundry. Using the old laundry as the center of operations Ah Jung patiently worked for a year to dig a deep ditch under the boardwalk to arrive directly beneath the bank vault. He removed the section of the brick casing and laid bare of the steel of the vault.
Then he waited patiently until after banking hours on Saturday, September 12, for the final task. He cut his way with tools, and possibly with acids, and created an opening in the bottom of the vault
A stream of  gold poured out yielding $9500 and $20 gold pieces before a  Bill Book slid down to block the opening in the safe preventing the theft of over $6000 in gold as well as currency, silver, and papers more valuable than what he did steal.
The  robbery was not discovered until Monday morning when the bank opened.   None of the authorities  thought there was any remote connection with the Chinese in Portland.
Two weeks later Chuey Gum took a trunk to The Dalles Express office and prepaid to send it to San Francisco by train. Nervously waiting for the train to arrive in several hours, he made frequent trips to the office during the rest of the morning to check on the trunk. The station  agent became suspicious  and summoned the sheriff.  They opened the trunk and found a portion of the loot wrapped in an old pair of Chinese pantaloons.
Frightened, Chuey Gum broke down and told the whole story. Ah Jung had paid him $2000 for silence  from him and the workmen in his laundry. Ah Jung, had  timed the crime to the last detail.   By the time the robbery was made public, he was already in San Francisco and before Chuey Gum had been arrested, Ah Jung  was far out to sea on a China bound steamer.
Chuey Gum was convicted and sent to the state penitentiary.  After his release he went back to China but returned to the U. S.  in 1910 bringing  a boy of  18 who he swore was his son, Chuey Sim.
Ah Jung took his gold to Macau where he lost it in an illicit enterprise. Chuey Gum became a member of an opium trading concern and later returned to China where he became engaged in banking. 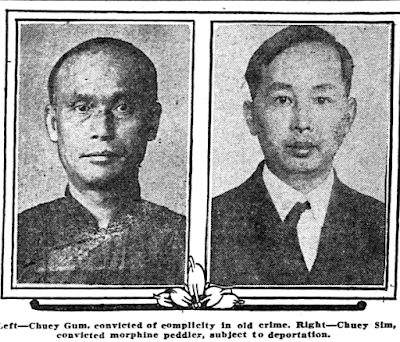 As for Chuey Gum's alleged son, Chuey Sim, his fate was worse than his father's.  He would later become the President of the Suey Sing tong in Portland. However, in 1921, after more than 30 years after his father's involvement in the 1890 First National Bank theft, Chuey Sim was serving four years on McNeill Island in the penitentiary for narcotic gang activities and was facing deportation upon completion of his sentence.
The story is stranger than fiction and could make an entertaining movie plot with crime, trickery, punishment, and poetic justice.
Posted by Chinese American Historian By Chance at 8:25 PM No comments: Links to this post