A Return Visit to Speak at Delta State University 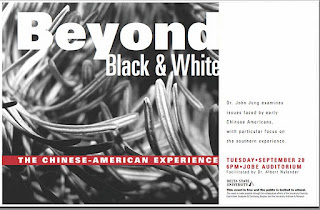 On Sept. 20, I made a visit to Cleveland, Ms., where I had previously talked in 2008 at Delta State University about the history of Chinese in the South. We decided to depart from a more standard lecture presentation with powerpoint slides and use a more informal format in which I would be interviewed in a conversational style. Dr. Albert Nylander, my host, served as the interviewer and asked questions directed toward understanding what led me to write my books on Chinese American history in the South, what the process entailed, how the books were received, and what I felt was the significance of my findings.
Posted by Chinese American Historian By Chance at 10:21 AM No comments:

My Visit to the University of Memphis, Confucius Institute

I had an opportunity on Sept. 13, 2011 to give three presentations about the history of Chinese in the Deep South that were sponsored by the Confucius Institute at the University of Memphis.  This program funded by the Chinese government focuses on providing native speakers of Mandarin to public schools for language instruction. Many other universities in the U. S. and other countries have similar programs. 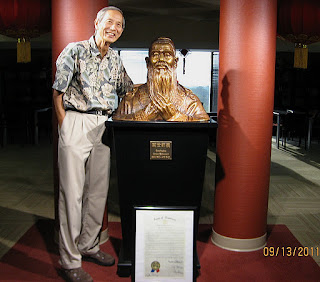 My most challenging audience was a class of 5th graders at the Campus School. At first, I was reluctant to make this presentation because of the young age, but realizing that it was important for young people to be introduced to the history of how Chinese immigrants were mistreated in the U. S., I welcomed the opportunity.  I was pleased with the attentiveness and curiosity that these youngsters showed during my talk.  One child was particularly interested in the example I showed of one of the poems that an immigrant had carved on the wall while interned at the Angel Island Immigration Station.  He wanted to know where he could read some of the other poems that were discovered when the barracks were about to be demolished after the station was closed. 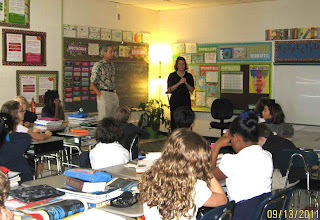 A second talk in the afternoon attracted a general audience of students and faculty and generated considerable interest in the topic of how Chinese came to settle in Mississippi and Georgia, how they earned their living, and how they were treated in the segregated South.

The audience for the final talk in the evening consisted of students in the Honors Program. I spoke about my memoir, Southern Fried Rice, which described what it was like to be a member of the only Chinese family in our city, Macon, Georgia, during the 1920s-1950s.

Posted by Chinese American Historian By Chance at 10:14 AM No comments: 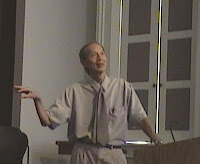 The Sociology/Anthropology Department at the University of Mississippi in Oxford sponsored my presentation, On Being Chinese Where Everyone Else is Either Black or White, about some of the experiences of Chinese living in the Deep South during the era of Jim Crow laws.
After the talk, I enjoyed Southern hospitality with delightful company at the well-known Ajax Restaurant on the town square, which features delicious Southern food.  I also had the opportunity the next day to be interviewed on Mississippi Public Radio about the lives of Chinese grocers in the Mississippi Delta during that period. 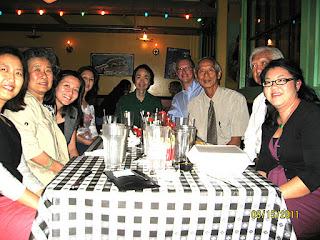 Posted by Chinese American Historian By Chance at 8:28 PM No comments: