Looking at Chinese restaurant menus from different decades provides a glimpse at changes in customer food preferences (as well as the increase in prices over the years).  Comparing menus from the same restaurant, if possible, gives a fairer picture than if they were from different restaurants in different parts of the country.

Portland's Canton Grill, operating as early as the 1920s, posted several of their menus from 1940 to the 1970s on their website (hopefully they will update with menus from the 1980s to the present).  Even though only one restaurant's menus are presented, it probably is representative of the menu offerings of other Chinese restaurants in the Portland area.
Posted by Chinese American Historian By Chance at 4:46 PM No comments:

Prior to the 1950s, Chinese were not even allowed to enroll in white schools in many parts of Mississippi. However, during the 1950s, not only were they admitted but some of them were competing well on high school football, baseball, and basketball teams.  Their participation is somewhat surprising because they had to work many hours to help in the family grocery businesses. In addition, some Chinese parents probably disapproved of their sons competing in physical competition.  However, the motivation of Chinese youth to fit in with American societal customs  prevailed over any opposition from their immigrant parents.

Posted by Chinese American Historian By Chance at 10:53 AM No comments:

Story of Chinese restaurant origins all over the world 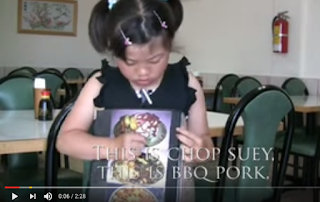 Although this documentary features a Chinese immigrant family-run restaurant in Mexico, the story it tells is virtually the same one you'll find all over the world about how Chinese immigrants sought an economic niche in their new homeland despite little knowledge of the new language, customs, and lifestyle.

Even though they often had little or no experience running restaurants, these Chinese saw it was a means to survival. Their hope was that their children, growing up in the new land, would be able to advance to less arduous and more enjoyable work.
Posted by Chinese American Historian By Chance at 11:15 AM 2 comments:

I spoke about my Sweet and Sour book on the history of Chinese family restaurants at a fundraiser for the Portland Chinese Scholarship Foundation headed by Bruce Wong, the grandson of the original owner of the no longer operating historic Hung Far Lo restaurant in old Chinatown. 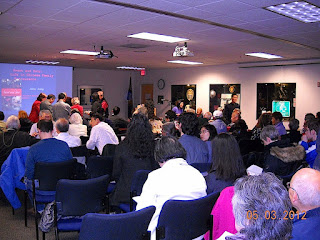 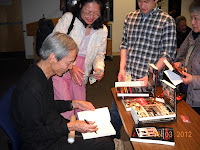 The next day, Bruce and I met at the Canton Grill, opened back in the 1940s, to participate in a  program produced by Annie Yau on Chinese laundries and restaurants as part of a six part documentary on Chinese Immigrant History for Radio Television Hong Kong (RTHK) to be shown in late summer.
First, the camera crew invaded the kitchen to film the preparation of several iconic Westernized dishes, chop suey, egg foo young, and chow mein. Then seated in a booth in the dining room, Bruce and I sampled the dishes as we conversed about the background of these popular items. 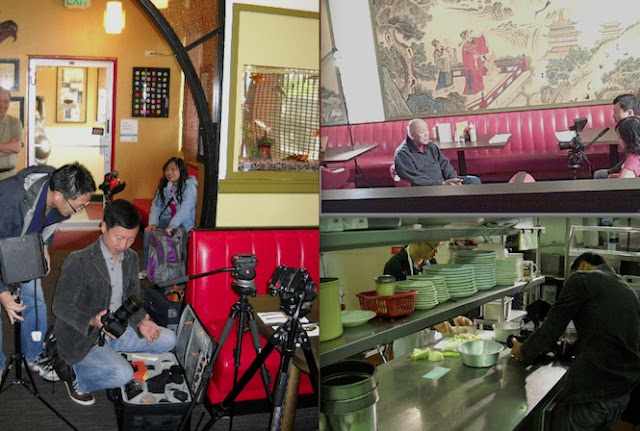 Posted by Chinese American Historian By Chance at 5:39 PM No comments:

A few years ago I was intrigued to learn that the University of North Dakota had an archive of "John Jung Letters," written in the 1920s by a young Chinese boy whose father ran a laundry in Devils Lake, a small town in North Dakota.  Fascinated by the fact that not only did this boy and I share the same name, but that we seemed to have a common life experience growing up in cultural isolation in a small town in a laundry run by our parents, I had to see these letters that were a collection of letters he wrote to  his fourth grade teacher after she moved to another town.  These letters, written over a span of about seven years open a window on the personal growth of development of John Jung as a Chinese boy in North Dakota where there were few other Chinese.

I also had my own "John Jung letters, collected from the 1950s after I left my birthplace, Macon, Georgia, to live in San Francisco.  Unlike the North Dakota letters, my collection does not contain letters that I wrote but rather it is a set of letters I received and saved from one of my teachers and two other white adult mentors who were strong influences on my personal growth.

I wrote a paper for a meeting of the Association of Asian American Studies that discussed these two sets of "John Jung letters" and posted the paper on this site, The John Jung Letters.
Posted by Chinese American Historian By Chance at 12:20 PM No comments: 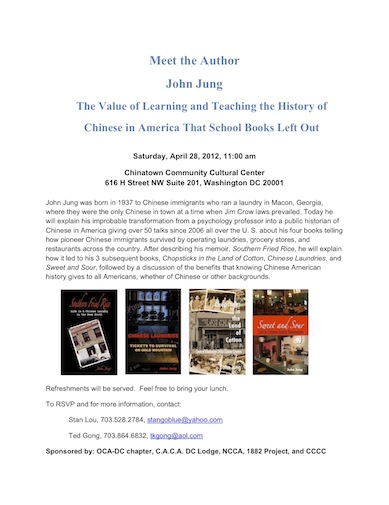 The Chinatown Community Cultural Center in D. C.'s Chinatown provided an ideal location for my presentation about my four books on important aspects of the history of Chinese in America that are not discussed in the typical school books on American history.  I was rewarded with an attentive and appreciative audience. One audience member, Jay Roberts, even posted a generous blog commentary about the talk! I met several community leaders and activists from the Chinese American community and after the talk we enjoyed a delicious lunch at, where else, a Chinese restaurant! A special aspect of the event was that 2 of my former psychology students from Long Beach, now living in the D. C. area, attended my talk.


Posted by Chinese American Historian By Chance at 7:26 PM No comments: