The Ordeal of Being A "Secret Asian Woman" (or Man)

This post is not an 'historical' item except indirectly. "Secret Asian Woman" is a personal reflection by Dmae Roberts, Peabody Award Winning journalist, about how she was, as a mixed Chinese-white child, tormented by hostile and demeaning comments from white children that stem from America's history of racism toward Chinese and other Asians.
Posted by Chinese American Historian By Chance at 10:43 AM No comments: 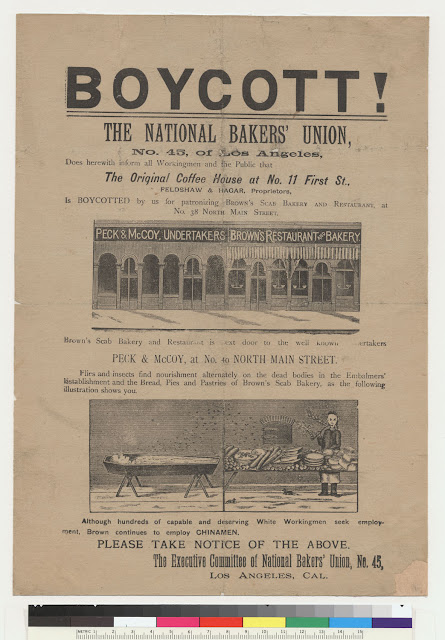 A flyer called for a boycott of Brown's restaurant-bakery in Los Angeles in 1899 because it hired Chinamen and denied work for deserving whites.  Notice the tactic at the bottom of the flyer showing that the restaurant was next door to a mortuary followed by the claim that flies and insects find nourishment alternately on dead bodies and the bread, pies, and pastries of the bakery.


Posted by Chinese American Historian By Chance at 9:46 PM 6 comments:

Growing up Chinese, I sometimes got the feeling that white kids looked down on me just because I was Chinese.  I doubt if it is an innate tendency but that it is much more likely to be an attitude learned at an early age.
Consider the message conveyed in a poem, Foreign Children, by the great American writer, Robert Louis Stevenson in his classic collection of poems, A Child's Garden of Verses. (I emphasized some lines in red in case they are not sufficiently blatant to you)
Of course, reading such a poem is not the only, or even, primary cause of ethnocentrism. Furthermore, many children who never saw this or similar poems also feel superior to "foreign children."  But its popular acceptance shows an insensitivity in the larger society to the damaging effects such attitudes can have on children. Fortunately for me, I was never exposed to this poem until I was an adult and had learned how to discount such drivel. 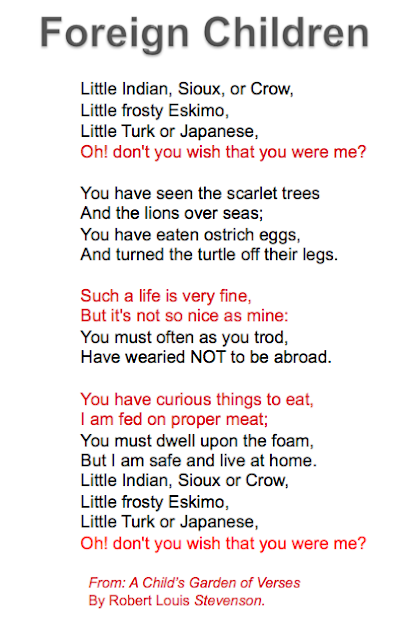 Posted by Chinese American Historian By Chance at 1:53 PM 1 comment:

A Yosemite Mountain Named in Honor of A Chinese Chef

Tie Sing was a talented Chinese camp cook at Yosemite in whose honor a 10,000+ ft. mountain in Yosemite National Park was named Sing Peak in 1899.

Tie Sing, a marvelous camp cook whom Mather had borrowed from the U.S. Geological Survey for the occasion, would construct a dining table, usually out of logs, and then . . . a linen table cloth would show up, and real napkins for everybody. Tie Sing would put together his collapsible stoves and calmly prepare soup, lettuce salad, fried chicken, venison and gravy, potatoes, hot rolls, apple pie, cheese, tea and coffee.
Joseph L. Sax, Natural History Magazine, Oct. 1976.


"He had been handpicked by Marshall, who knew him from Geological Survey expeditions as the finest gourmet "chef" available. Ty Sing had worked for the survey for twenty-eight years, and for this trip he had brought Eugene, another USGS veteran, as his assistant."


"Roughing it" was not a term to be used for our dining. As it was every night on our trip, the table was set with a snowy white linen tablecloth and napkins, silverware, and china. Ty Sing and Eugene somehow managed to wash and iron the linen each day in addition to packing, traveling, unpacking, baking, and cooking meals.


At the farewell dinner, Albright noted:
Ty Sing had personally written his notes in Chinese and English. They showed that this man could be counted not only as the "gourmet chef of the Sierra" but as the "philosopher of the Sierra."
Sing is reported to have died in an accident in 1918, but it was not specified exactly where or how.


Posted by Chinese American Historian By Chance at 9:31 PM 5 comments:

People from all over the world came to work in the mines of Jerome, Arizona, during its heyday. According to Herbert V. Young, in They Came to Jerome, by the 1920's the following nationalities were represented in a workforce of 2,200: American, Austrian, Bulgarian, Canadian, Dutch, English, Finnish, French, German, Greek, Irish, Italian, Mexican, Portuguese, Russian, Scottish, Scandinavian, Serbian, Slavic, Spanish, Swedish, and Welsh. There was also a miscellaneous classification.

Falling into this later classification were the Chinese. The Chinese, here from the beginning of the mines, were viewed with mixed reactions by the rest of the predominately occidental townsfolk. The asians did not fall into the usual categories. For instance, few if any ever worked in the mines. They were all self-employed. In the majority of cases, they established restaurants and laundries.

There were other practices that set them apart from the rest of their fellow citizens - some that caused much concern in certain segments of the community. Bill Adams, editor of the Jerome Mining News, took on a personal campaign to have the Chinese run out of town in 1909. Mr. Young says that "Front page attacks were the rule. One man, it was reported, found maggots in his soup while eating at Hong's restaurant. Another report was that cockroaches and bedbugs had been found in the food. The Chinese, shouted Adams, should be barred from Jerome . . ."

Perhaps it was not so much a health issue that bothered Adams and others, but what they might have considered to be a moral one. It was well known that certain members of the Chinese community had imported the vice of opium smoking to the town. Opium dens, much like those of Hong Kong and old Peking, were set up in the basements and backrooms of various Chinese-owned establishments, complete with bunks, pipes, burners, and sticky balls of the poppy extract. These dens were frequently raided by the local police, but like the speakeasys in the twenties, they would reappear a few days later, a few doors down. The majority of Chinese people were, of course, law abiding citizens who worked hard to establish a place for themselves out on the American frontier.

The last of these first generation Chinese to remain in Jerome was a Mr. Yee, who operated, paradoxically enough, the English Kitchen Restaurant. Mr. Yee acted as sole waiter, chef, and dishwasher of the eatery.

Eating at the English Kitchen was always somewhat of an adventure, because not only did Mr. Yee not speak English very well, but the menu might be different from day to day. Somedays, a customer might not be sure what he was getting until the food arrived at the table. Mr. Yee's specialities were his made-from-scratch fruit pies, the ingredients for which he harvested from the fruit trees around town that the Italians had planted. They included some of the tastiest apricot, peach, and apple pies to be found west of the Mississippi.

Mr. Yee was a good example of what hs been called Chinese inscrutibility. Although he lived in Jerome for over fifty years, he apparently never learned to speak English very well. He was almost unintelligible. During the sixties, however, he was observed talking to the proprietress of Jerome's last grocery store - in fluent Spanish.


Many thought that Mr. Yee knew much more than he wanted to let on. A local who lived here during that time tells of an encounter with Mr. Yee one spring morning in the restaurant.

"I had developed a habit of going down to the English Kitchen for a cup of oolong tea after my breakfast. As I entered this day, Mr. Yee was sitting under a cloud of blue smoke at a booth in the back, reading a Chinese newspaper of unknown vintage. I took a stool at the counter and waited for him to respond to my presence. Eventually he rose and came over. He was wearing his usual outfit: long skirt-like white pants, black slippers, a calf length stained white apron, and a white coolie/chef's hat. I told him that I would like some hot tea. He stood there for a second, looking quizzically at me with his old yellowed eyes. In back of him was a wall of dark brown hardwood shelves filled with boxes of oolong, jasmine, and Earl Grey tea. Looking at me as if dumbfounded, cocking his head to the side he asked, "Ot tee . . . ot tee?" He paused and finally, with a startled realization, he said "OOOOOOO . . . ot tea!" Then he smilied and laughed - for a long time - like it was the funniest thing in the world."

When Mr. Yee died in 1973, the townsfolk drove his hearse down Main Street and tolled the Jerome Bell hanging in front of the Mine Museum in an unusual gesture of love and respect.
Posted by Chinese American Historian By Chance at 7:29 PM 2 comments:

Opium use in China dates back to the Ming Dynasty when it was considered a 'luxury' among the elite.  However, by the19th century it had become a 'necessity' among the lower classes from which came a large number of the Chinese who immigrated to many countries in the last half of the 19th century. Their opium habit continued as many used it to cope with their difficult lives.  Fears of dangers to white women from the Chinese led to laws in the 1880s directed against opium smoking by Chinese although its medicinal use by whites was tolerated until the Harrison Narcotic Act of 1914.
Smoking opium became a federal offense that led to a prison sentence of a year and a day in a federal penitentiary, the earliest which were located in  Leavenworth, KS., McNeil Island, WA, and Atlanta, GA.
Although I've seen several accounts about the widespread use of opium among Chinese, I have not yet found any discussion of what penalties Chinese received when apprehended until I ran across the 1919 prison file of Charlie Lee Onn,  a  54-year old, married Chinese servant who had been in this country for 26 years. Charlie was arrested for "concealing smoking opium" in 1919 and sentenced on June 24, 1919. Although he lived in New York,  he was sentenced for a year and a day and sent to the nearest federal penitentiary in Atlanta, GA where his sentence began on July 4, 1919.  He was eligible for probation on Nov.4, 1919, which was denied, but he did not have to serve his full sentence as he was released on April 23, 1920.  Note that on his file his "Color" was listed as "Chinaman." 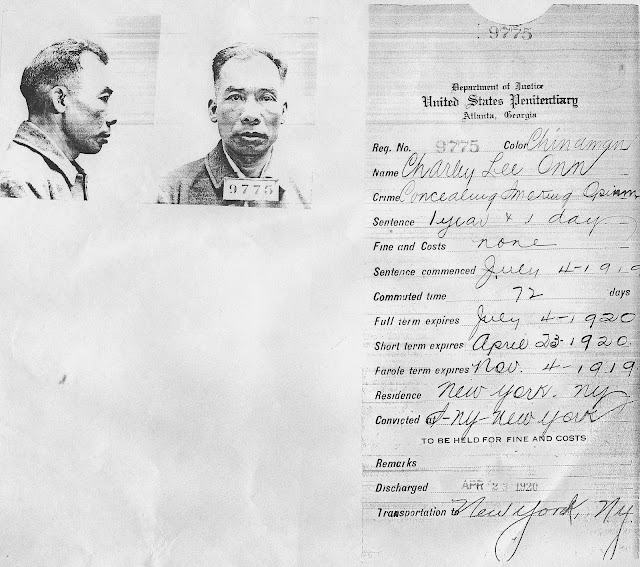 Like other inmates, Charlie was allowed to exercise in the prison yard between 1 and 3:30 on Sundays, weather permitting, but he had to sign the form below agreeing to follow rules such as not trying to escape!  It seems quaint and naive today that prisoners would be expected to understand and accept the terms required in this agreement.

During his imprisonment of about 9 months, Charlie received visits from only 4 or 5 friends, each lasting for 30 min.  He received seven pieces of mail, one of which was from his wife.  He wrote 11 letters, one to his wife.  It is fair to say, he had limited contact with the outside world.

Posted by Chinese American Historian By Chance at 4:17 PM 3 comments: