Joe Jung (no relation), who integrated Atlanta's schools in 1913 by gaining admission for his children to attend white schools, was slain in 1917 during an argument with James MacDonald, a concessions manager on the grounds of the Southeastern Fairground.  Jung was a local businessman who had a concession at the fair.

At the trial MacDonald testified that when he asked Jung to move his location from its site, Jung became angry. Fearful that Jung was going attack him with a three-pronged ice cream cone machine, MacDonald claimed he acted in self-defense.  The newspaper made no mention of what type of weapon was used by MacDonald but it did cause fatal injury to Jung. 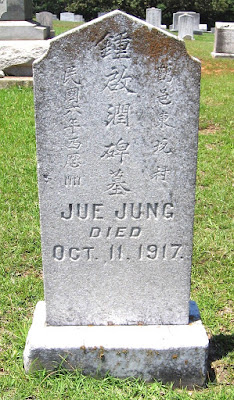 At the trial in 1919, MacDonald was convicted of manslaughter and sentenced to prison for 20 years but he filed an appeal which the state Supreme Court granted.  A bail of $10,000 was set because it was thought he might flee to Mississippi where he had been a prominent politician and was a friend of Mississippi Governor Bilbo.

The second trial in 1919 resulted in a mistrial.  In 1922 a third trial was held and the charge was reduced to a misdemeanor with a fine of $500, which MacDonald agreed to pay in lieu of working on the chain gang for one year.

So, from a sentence of 20 years in the penitentiary, Joe Jung's slayer received no jail time and only a $500 fine.

Acknowledgement: Thanks to Matthew Kramer, an Atlanta attorney, for providing leads on this story.
Trivia: Kramer noted that one of MacDonald's attorneys, Robert P Jones, was the father of the legendary golfer, Bobby Jones.
Posted by Chinese American Historian By Chance at 4:21 PM No comments: Links to this post 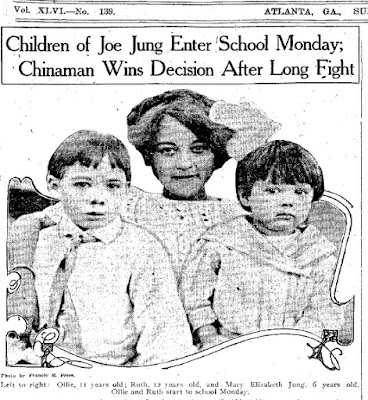 In the Jim Crow South, Chinese also faced race barriers.  Their children were denied admission to white schools in many places.The best known instance of school segregation against Chinese children was in the 1920s in Rosedale, Mississippi, where white school were restricted to caucasians.  A court case against the ruling went all the way to the U. S. Supreme Court which  in 1927 ruled against the Chinese, Gong Lum v. Rice, 1927,  who did not succeed in achieving school integration until the late 1940s.

However, a very little known earlier case in 1913 of school segregation against Chinese in Atlanta, Georgia had a favorable outcome.  Joe Jung (no relation), a well-regarded "Chinaman" who owned a restaurant and other businesses, contested the denial of admission of two of his children to local white schools in Atlanta with the aid of a local church pastor where the Jungs worshipped.  The process took over two years but, Ollie, age 11 and Ruth, age 12, who had been privately tutored, were finally admitted by the City Attorney to the 4th and 5th grades, respectively, of a white school without recourse to any court proceedings. A third child, Mary Elizabeth, age 6, will be admitted to the first grade the next year.

In the Atlanta newspaper, Jung was described as a upright Christian who had long since shorn his queue and thoughts of "pagan gods and tong wars." It also noted that his wife, Lela, is a white person, leading one to wonder how the decision would have been if she had been Chinese or black. Or how the decision would have been if the father had been white and the mother, Chinese?

Acknowledgement: Thanks to Matthew Kramer, an Atlanta attorney, for providing leads on this story.
Posted by Chinese American Historian By Chance at 3:29 PM No comments: Links to this post 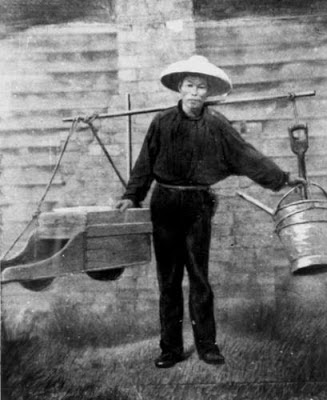 In the mid 19th century, over 40,000 Chinese immigrant came to Australia when gold was discovered and in 1861, they were the largest group of foreigners and constituted 3.3 per cent of the Australian population. They were immediately targets of prejudice and even had poems and songs written to mock them.

A poem attributed to Charles Thatcher from the Australian gold rush era, The Fine Fat Saucy Chinaman, makes light of the Chinaman's place in society. It notes that the Chinaman works hard seeking gold. He only gets the little pieces that whites leave, butt he is praised for his perseverance that enables him to pay his way. It is sung to the tune of Henry Russell's "The Fine Old English Gentleman,"a poem attributed to Charles Dickens. 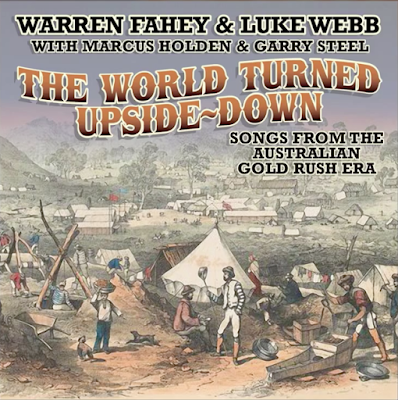 One performance by Warren Fahey is part of a collection of Gold Rush era songs.
A second performance of the poem as a song is on a blog post that provides some historical context.

Posted by Chinese American Historian By Chance at 8:06 PM No comments: Links to this post

"The Heathen Chinee" in American and Australian Verse


Chinese immigrants and their descendants were depicted in many unflattering ways in the last half of the 19th century and well into the 20th century.  Their clothing, language, and foods were often targets of jest and ridicule. More harmful were the stereotypes of Chinese as cunning, devious, and untrustworthy.

A classic portrayal of this image is the short satirical poem written in 1870 by the well-known writer, Bret Harte.  Originally entitled Plain Language from Truthful James, it became known as The Heathen Chinee because of its unflattering depiction of Ah Sin, a Chinese who won a card game of euchre played against two white men, Truthful James, and Bill Nye. 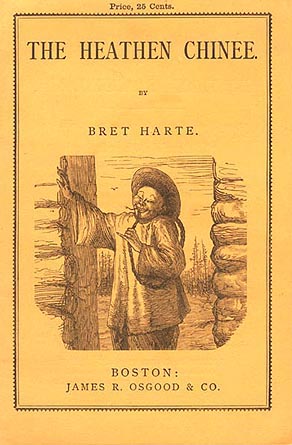 In the poem, Truthful James narrates the action.  He notes that he and the other white man, Bill Nye, conspire to win by cheating Ah Sin with a stacked deck.  Both white men think Ah Sin was childlike and did not understand the game, and they expect to easily trick him.  Ah Sin begins by playing poorly and losing just as they expected.  Then, contrary to their expectation, Ah Sin suddenly beats them at their own game by cheating, playing the same card that Nye had dealt to the narrator.

Till at last he put down a right bower,
Which the same Nye had dealt unto me.

Then I looked up at Nye,
And he gazed upon me;
And he rose with a sigh,
And said, 'Can this be?


We are ruined by Chinese cheap labor,

Realizing that Ah Sin cheated them, Nye fights Ah Sin and discovers that Ah Sin had several packs of cards hidden up his sleeves.  The white players dispatch Ah Sin with some swift kicks to his derriere. This brief poem ends with the narrator reiterating his belief that the Heathen Chinee is full of tricks and peculiar.

Which is why I remark,
And my language is plain,
That for ways that are dark
And for tricks that are vain,
The heathen Chinee is peculiar, --
Which the same I am free to maintain.

Bret Harte's personal attitude toward the plight of Chinese immigrants was sympathetic even though his poem might suggest otherwise.  The intent of the poem has been viewed as a satirical commentary on the hypocrisy of whites who cheated the Chinese but then attacked them for the same behavior. Nonetheless, the poem reinforced this negative image of all Chinese that was in keeping with the national animosity against cheap Chinese labor that led to the Chinese Exclusion Act in 1882, not too long after the poem was published.  The image of the heathen Chinee created by Harte's poem quickly became a popular term of derision of Chinese and reprinted in newspapers across the country even as late as the 1920s, half a century later.

This negative stereotype of Chinese was not limited to the American West, but can also be found in the poetry of James Brunton Stephens, a Scot who moved to Australia.   In a collection of poems published in 1873 shortly after Harte's poem, entitled My Chinee Cook, Stephens shows his bias against Chinese in the subtitle, "And Other Humourous Poems."  He begins the poem by expressing his admiration for his Chinee cook who worked diligently doing housework as well as cooking delicious food.

He did the work of man and maid—made beds and swept out rooms;
Nor cooled he in his zeal, as is the manner of new brooms:
Oh, he shed celestial brightness on the most sequestered nook,

For his mop and pail were everywhere—my cleanly Chinee cook.

We got fat upon his cooking; we were happy in those days,
For he tickled up our palates in a thousand pleasant ways.
Oh his dinners! Oh his dinners! they were fit for any duke!

However, something seemed not quite right to Stephens as suggested in this verse:

And day by day upon my wife and me the mystery grew,
How his virtues were so many and his earnings were so few;
And we laid our heads together to find out by hook or crook,

The secret of the cheapness of that priceless Chinee cook.

One day, Stephens discovered to his dismay that the Chinee cook was a jewel thief when he tried to sell his stolen goods at very cheap prices to his wife.

And dirt cheap, too, were the jewels of that jewel of a cook.
I returned, and just in time to stop the purchase of the lot,
And to ask him where on earth those costly jewels he had got,

And when I looked him in the face, good gracious how he shook!


My Other Chinee Cook

In another poem, My Other Chinee Cook  Stephens related that he eventually hired another Chinee cook who did not cook as well as the first one, but his redeeming feature was his exquisite rabbit pie.

He was lazy, he was cheeky, he was dirty, he was sly,
But he had a single virtue, and its name was rabbit pie.

Ready to fire this cook, Stephens vacillated because of the wonderful rabbit pie.

For we tacitly postponed the sacking-point till by-and-bye,
And we tacitly said nothing save the one word, “rabbit pie!”

Though where he got the rabbits John would ne'er vouchsafe to say;
But we never seemed to tire of them, and daily could descry
Subtle shades of new delight in each successive rabbit pie.

However, later Stephens was sickened when his Chinee cook explained why he could not make another pie for a guest:

“Last-a week-a plenty puppy; this-a week-a puppy done!”
Just then my wife, my love, my life, the apple of mine eye,
Was seized with what seemed “mal-de-mer,” — “sick transit” rabbit pie!

Before the cook could flee, Stephens beat the cook thoroughly.

And I—I rushed on Johnny, and I smote him hip and thigh,


And I never saw him more, nor tasted more of rabbit pie.


As in Harte's poem, the two poems of Stephens depicts the "Chinee" as deceptive or inscrutable and a cheat or dishonest person. In all three poems, the whites physically attack the "Chinee" who is defenseless and does not fight back.

A little poem that criticized both whites and Chinese for cheating became an iconic representation of the devious and deceitful cheating Chinese for decades.

Posted by Chinese American Historian By Chance at 8:44 PM No comments: Links to this post