Why is the history of Chinese in Grand Rapids, Michigan, so noteworthy?  It may have been similar to the history of Chinese in many other cities of its size in some other parts of the country. However, the Grand Rapids Historical Commission has created an outstanding record of the Chinese (as well as all other ethnic groups, I should add) in their community using documents and photographs using text and audio presentations.

The excerpt below from their website gives a bit of historical context, followed by a description of the first three Chinese, all in the laundry business, as described in a podcast.


"The Chinese entered the laundry business because they were kept out of any job where they were seen as taking "American" jobs, plus it was a business that could be started with almost no capital. The Chinese Exclusion Act of 1882 was renewed for ten years in 1892 by the Geary Act, and again in 1902 with no terminal date. This kept most Chinese out of the country and prohibited them from obtaining citizenship until it was repealed in 1943. Unless they were a relative of someone here prior to 1882 or a "paper son" they were excluded from entry. Some of the newspaper articles in our on-line archive describe the indignities suffered by these immigrants."

"The first Chinese residents of Grand Rapids were three men working in the laundry business ca. 1875. Wau Lee and Ah Tun were at 19 Canal St. Lung Sam operated his O.K.Laundry under the Rathbun House, an hotel located at 31 Monroe, until 1880 when Fee(Fu) King is listed as the operator. After 1880 Young Joe became the owner of the Rathbun House laundry. In 1889 Lam Fook, the proprietor of the O. K. Laundry who had lived here for two years, was found dead in his “dark, damp basement room by his partners, Wong Young and Lee Tsee.” His belongings included a certificate of deposit for $100, many letters, a brass tobacco pipe, a bag of tobacco, and a few trinkets and charms."


The website proudly notes that in 1874, one of the most important Chinese in America, Wong Chin Foo, came to lecture in Grand Rapids, where he also filed his citizenship application, making him the first Chinese to become an American citizen. Wong Chin Foo started a bi-lingual newspaper, the Chinese American, and civil rights activist with the Chinese Equal Rights League of America, of which he was founder and secretary in 1892. 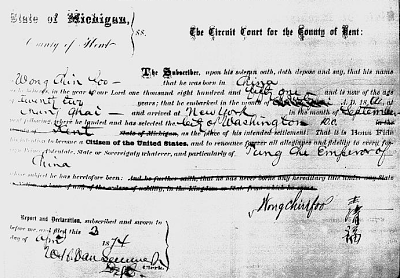 The Grand Rapids Historical Commission website, as shown below, is exemplary as it posted a total of 30 documents related to the historical record of early Chinese in the community. We can only speculate that the story of the Chinese is Grand Rapids is similar for small groups of Chinese who settled in other communities, where they ran laundries initially, and then, as described in this podcast, some opened restaurants, all living as foreigners in an often hostile environment. 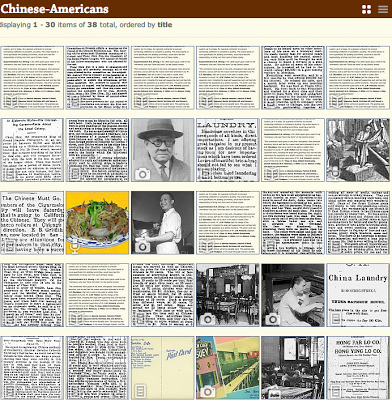 Posted by Chinese American Historian By Chance at 9:11 AM No comments:

A Culturally Appropriate Chinese Funeral in 1904 in Washington, D. C.

A Chinese laundryman, Moy Sue Wing, died suddenly of heart failure in 1904 in Washington, D. C.  Six fellow Chinese, described as "almond-eyed Chinamen" arranged for his funeral, which was fully described in the Washington Times of April 19, 1904, featuring a photograph of his friend, Moy Jim, kneeling at the open grave to deposit chickens, fake paper money, bowls of rice, a jug of wine, chopsticks, and tea cups, and a pot of tea.   The article noted that in addition to his six countrymen, the procession to the cemetery included about 600 curious white women and children onlookers. 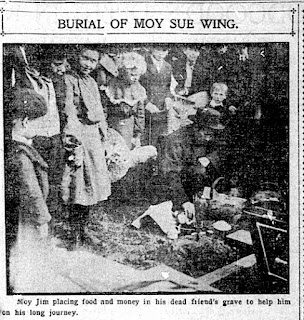 No mention, however, was made as to whether the undertaker was Chinese, but judging from the situation in New York City noted in the previous post on this blog that there was no Chinese licensed undertaker until 1930, it is most likely than a caucasian undertaker was employed here, as throughout the country. Fortunately, for Moy Sue Wing, his friends were there to ensure that his funeral service followed Chinese customs and beliefs, one that thousands of other Chinese who died in places where they were the only Chinese would not have received.


Posted by Chinese American Historian By Chance at 12:03 PM 3 comments:

Who Was Bert V. Eutemey, And What Was His Importance for New York City Chinese?

It was not until the 1930s in New York City that Chinese who died could receive mortuary services from a Chinese. For decades, a caucasian undertaker, probably Irish or Italian, performed these services because discriminatory prejudices did not allow Chinese to enter this profession. Unfortunately, white undertakers were not familiar with or incorporated many Chinese cultural practices and beliefs about funerals.

Bert V. Eutemey, a name that does not appear to be Chinese, was born in Jamaica with a mixed English, African, and Chinese ancestry. He became the first licensed Chinese undertaker in New York City in 1930 with his Chinese Cheung Sang Funeral Corporation at 22 Mulberry Street, a name that ironically translates as "The Chinese Wish You Long and Happy Life Corporation." Historian Shirley Yee noted in her recent book "An Immigrant Neighborhood: Interethnic and Interracial Encounters in New York, that since he was born in Jamaica, Eutemey was able to gain entry into the mortuary business using the non-Chinese part of his identity as a white British citizen. His Chinese background and bi-lingual fluency then facilitated his acceptance in the Chinese community.  It is paradoxical that Eutemey's mixed racial heritage, usually a stigmatized condition, actually worked to his advantage in this situation.

Despite this obvious advantage, Eutemey still occasionally faced some delicate situations such as whether to conduct a funeral using western or Chinese customs. In 1930, an article in the New York Sun, Jan. 8 reported that Eutemey was in a dilemma planning the funeral of Charlie Boston, a Chinese Christian, as different relatives disagreed about whether he should receive a western or Chinese-style send-off. It was reported that Eutemey was prepared for either decision by hiring both an American and a Chinese band.

I had never thought about this problem before I learned about the significant impact that Eutemey had for the Chinese community in New York City. It raises questions of what happened to Chinese who died in the rest of the country, and how did Chinese elsewhere break the racial barriers in this profession?

Posted by Chinese American Historian By Chance at 9:34 PM No comments: