Interracial marriages from the mid-19th century until the mid-20th century were even less acceptable in China than in the U.S. Relatives of both a Chinese husband and his white wife generally disapproved of such marriages, even to the point of "disowning" them.  Nonetheless, marriages of Chinese men to white American women did occur, although the number is not known.  Given the rejection and disapproval in society toward such unions, one might expect some of these mixed marriages to fail. How many of these marriages "succeeded" or "failed" is not easy to determine.

Jocelyn Eisenberg, married to a Chinese graduate student, Jun Yu, is a writer and blogger who focuses on contemporary marriages between Chinese men and white women, describes six white women from the past who married Chinese men where details of their marriages have been documented in memoirs or films:

Louise Van Arnam Huie. Call Louise the “greatest” on this list of the yangxifu of the past — she fell in love with a Chinese man in 1889 (Huie Kin, a young minister who founded New York City’s first Chinese Christian Church and later shared his experiences in a book titled Remembrances). They left behind more than just many descendants, as this NPR story notes:
The descendants of the Huie Kin family still have regular family reunions in the US, showing the love continues.


Letticie See. Letticie — also called Ticie — had some serious grit. Sure she boarded a train, with just a bag to her name, at 18. But more importantly, she talked (and even demonstrated) her way into a job at Fong See’s factory in Chinatown, which began a professional — and romantic — partnership that lasted decades. The couple married in 1897, though their union was never recognized during their lifetime because of anti-miscegenation laws. Read about Ticie and her descendants in the book On Gold Mountain by Lisa See.

Mae Franking. Mae could have been just another Midwestern Scotch-Irish girl in Michigan — but then she met Tiam in 1907 when she was just 17, and something changed. Not right away, though. Mae first became friends with Tiam, and eventually opened herself up to a controversial relationship and marriage (the latter denounced in racist articles that ran in Ann Arbor and Detroit). Still, Mae chose him, chose to move with him to Shanghai in the early years of the Republic, and even chose to become a good Chinese wife in the eyes of his family. Tragic events forced her return to Michigan after several years (read Mae Franking’s My Chinese Marriage

to find out why).

Grace Divine Liu. Grace came from a conservative Tennessee background, but bucked all family expectations by falling for Liu Fu-Chi, a Chinese man she met while studying opera singing in New York City. She eventually married him in the city 1932, against the wishes of her family, and later settled with him in Tianjin. Anyone with a passing knowledge of Chinese history will see the dates on her book — 1934 to 1974 — to know there’s some serious drama in this story. War. Harassment. Prison. But she stayed in China. Now that’s courage and, dare I say, grace. Read about it in Grace: An American Woman in China, 1934-1974

Gertrude Wagner-Du. When Gertrude saw Du Chengrong at a skating rink in Vienna in 1933, it really was love at first sight. She later traveled alone to Shanghai just to be with him — despite her disapproving parents — and married him in 1935 at a hotel next to Hangzhou’s West Lake. Sigh.
But China’s tumultuous history interrupted their happily ever after, from war with Japan to the Cultural Revolution. She could have easily fled to Vienna, but instead stayed in China out of love for her husband.
See her story as a movie:  For All Eternity (also known as “On The Other Side Of The Bridge” and “芬妮的微笑”)

Gladys Yang. She married scholar Yang Xianyi in 1941, and the two formed one of the most famous pairs of translators, producing renowned English versions of classic Chinese literature, from A Dream of Red Mansions to Lu Xun’s stories. People say Gladys truly loved China, a love that sustained her through some of the darkest times of modern Chinese history (she stayed there with her husband from 1941 until her death in 1999). This quote from her husband couldn’t have said it better:
“She wanted to live a Chinese life and even after being in jail she still decided to stay in China,” said her husband, who added: “She regretted her son’s death, although otherwise, I don’t believe she regretted anything.”
Read their story in White Tiger: An Autobiography of Yang Xianyi

. Also, see this appreciation from Black and White Cat, who apparently once had Gladys’ sofa!

Posted by Chinese American Historian By Chance at 9:00 PM No comments: Links to this post 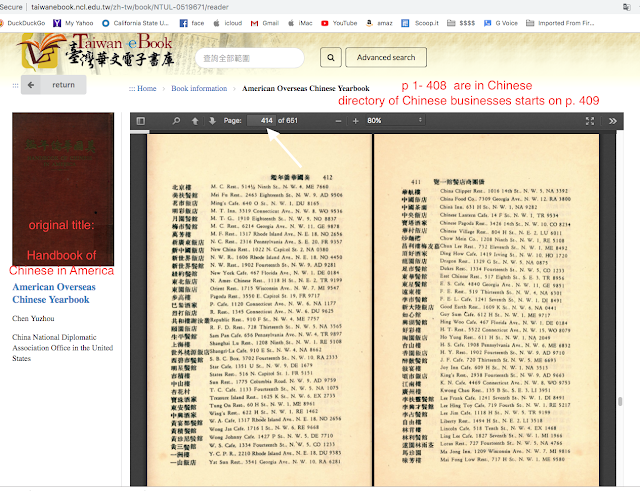 As noted in an earlier post I made in 2012, a listing of Chinese businesses in the U.S. was published in 1946 and called, Handbook of Chinese in America. It is extensive, but it is unknown how complete it was as a business probably had to pay to be listed.

I could not find any copy for sale but a handful of university libraries had copies.  I borrowed one via Interlibrary loan and xeroxed the roughly 250 pages of listings which have been valuable for my research.

Today, I stumbled upon a beautifully scanned copy from the National Central Library in Taiwan.  I include a screenshot of 2 pages, 414-415.  The first 408 pages are in Chinese; you can jump ahead if you enter a page number between 409 and 651 in the little window at the top of the screen.


Posted by Chinese American Historian By Chance at 4:15 PM No comments: Links to this post

Chinese As Butts of "Put Down" Stereotypes and "Humor"

Chinese not only suffered physical threats and harm to life, limb, and property but also endured harassment and bullying. Like many other minority groups, they were targets of jokes that belittled them and made them the butt of put-down, or worse, jokes, negative stereotypes, and "humor." Some of these jokes are quite racist in tone and harmful to the target group (consider also  "Newfie"and "Polak"jokes).

The "heathen Chinee" was one of the most offensive and well known negative views of Chinese that came from a poem, Plain Language from Truthful James, written in 1870 by Bret Harte, who ironically was sympathetic toward the Chinese and his poem was an attempt to show the hypocrisy that whites had in their attitudes toward Chinese. In the poem two miners, Bill Nye and Truthful James play euche, a card game, with Ah Sin, a Chinaman who they assume doesn't know how to play and they expect to easily win the game especially since they cheat in dealing the cards. Much to their surprise Ah Sin, more adept at having cards "up his sleeves," emerges as the winner. In retaliation, they assault Ah Sin once they discover his cheating despite the fact that they also cheated.


WHICH I wish to remark, 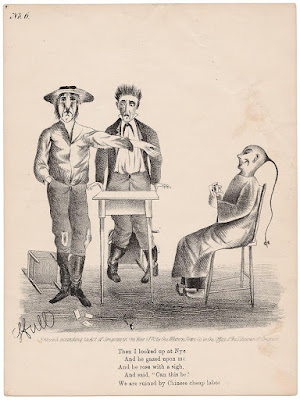 And my language is plain,
That for ways that are dark
And for tricks that are vain,
The heathen Chinee is peculiar,
Which the same I would rise to explain


This negative image and the violence toward the cheating "heathen Chinee" added to the hostility toward Chinese during the great depression of the 1870s  because of their cheap labor, as Bill Nye exclaims in the poem,

"Can this be?
We are ruined by Chinese cheap labor,—"

Terry Abrahams, an anthropologist in Idaho, collected examples of negative jokes against Chinese for many years and analyzed them in a 2003 paper:

No Tickee No Washee'[1]: Sympathetic Representations of the Chinese in American Humor.

Put down jokes about Chinese and other minorities (ethnic, religious, sexual orientation, women) abound even today.  Here is  a sample of contemporary one-liner put-downs of Chinese from:
https://funniest-jokes.weebly.com/china.html

Interestingly, the "Chinaman" is not always the loser in ethnic jokes....  For example, in the following joke posted by Abraham, the "Chinaman" could be said to have had the last laugh with his come back to his tormentors.

The boys on the ranch decide for New Year's resolutions that they will not tease the Chinee cook anymore, and troop into the kitchen to apologize to him for all the tricks they have played on him all year.

But, consider that the riposte by the Chinese cook did not actually come out of his mouth, or mind!  The come back punchline must have been written by a white person, perhaps someone somewhat sympathetic to the Chinese.

Posted by Chinese American Historian By Chance at 3:10 PM No comments: Links to this post