One might assume that all Chinese in the U.S. would object to the passage of the 1882 Chinese Exclusion Act.  However, a Los Angeles newspaper reporter decided to go to Chinatown and interview some residents.  It isn't stated how many Chinese he spoke with, or how many objected to the law, but he did find at least two merchants who approved of the law.

Quong Hing saw one effect of the law would be that "Chinamen here would scatter out over the country," which he argued would benefit their wages. He also defended the restriction of Chinese if their presence made times hard for others (white labor). 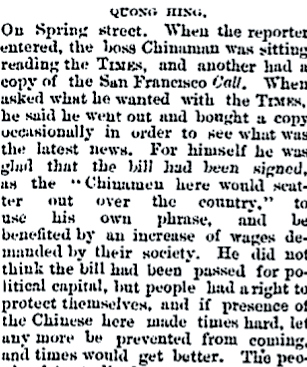 A second merchant, Ah Toy, held a similar view. He almost questioned whether money Chinese sent back to China instead of spending it in the U.S., one of the objections raised about Chinese, was a significant amount overall.  He felt that the Chinese who came from China were poor but that after being here two years would make enough money to go back to China.

The article only cited the views of two Chinese and it would have been interesting to see how widespread similar views were held among Chinese.


Posted by Chinese American Historian By Chance at 5:45 PM No comments: Links to this post

The 1911 Chinese overthrow of the Qing dynasty led by Sun-Yat Sen not only established the Republic of China, but had a big impact of barbers, both in S.F. and China, as Chinese men began cutting off their queues or "pigtails" that the Manchus had imposed on the Han Chinese. 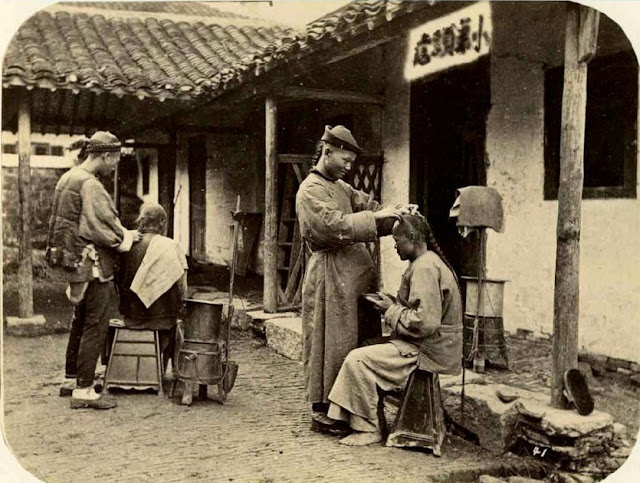 The queue was a  hairstyle worn by the Manchu men from central Manchuria who invaded China during the Qing dynasty. The Manchu required Han Chinese men wear a queue which consisted of the hair on the front of the head being shaved off above the temples every ten days and the rest of the hair braided into a long ponytail. The hairstyle was compulsory for all males and the penalty for not complying was execution for treason. In the early 1910s, after the fall of the Qing dynasty, the Chinese no longer had to wear it.

A San Francisco newspaper described the impact of the regime change on the consequences for Chinese barbers as shown in excerpts from the San Francisco Call in 1911. 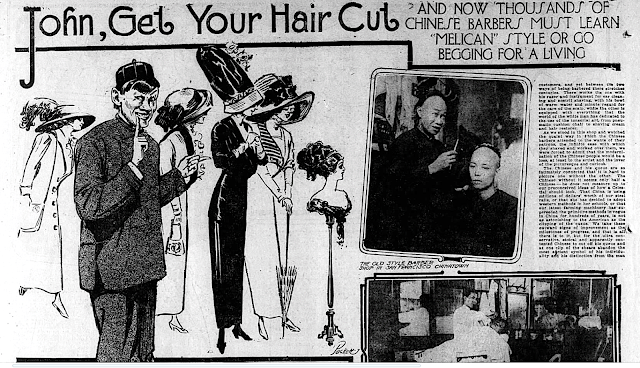 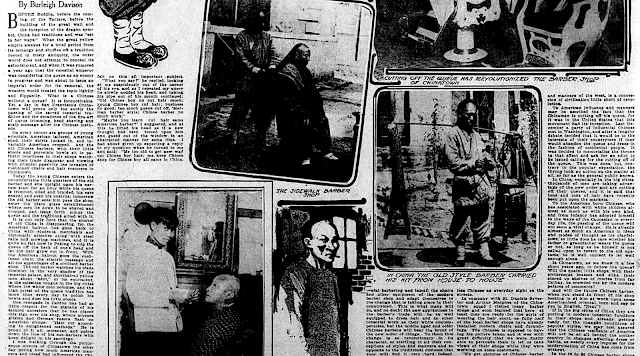 In contrast to Chinese men voluntarily cutting their queues in 1911 as an expression of freedom from the mandate of the Manchu rule, the cutting of queues imposed by whites during the late 19th century was humiliating if not emasculating.
In April 1878, Ho Ah Kow was arrested in San Francisco for violating the “cubic feet” ordinance, which limited the number of Chinese living within a room. While in jail, the Sherif ordered his queue becut off. After his release from jail, Ho Ah Kow enlisted the support of the Chinese Six Companies to sue Sheriff Nunan.
California Supreme Court Justice Stephen Field decided the case in an opinion that had a far-reaching and historic impact on the rights of Chinese immigrants, ruling that the Queue Ordinance was a form of additional punishment within the “cubic feet” law, which the Board of Supervisors did not have the authority to enact. The judge also ruled that the law was clearly aimed at the Chinese and was therefore a violation of the right to equal protection under the law for “all persons,” not merely “all citizens.” Finally, because of the specific disgrace imposed upon the Chinese, the law was deemed a form of “cruel and unusual" punishment. The San Francisco Wasp lampooned the issue with a drawing of Justice Fields dressed in Chinese clothing and sporting his own queue. It showed him in “Justice Field’s Barber Shop,” braiding the hair of a Chinese man, under a picture of Sheriff Nunan having just finished using a scissors to clip a queue. 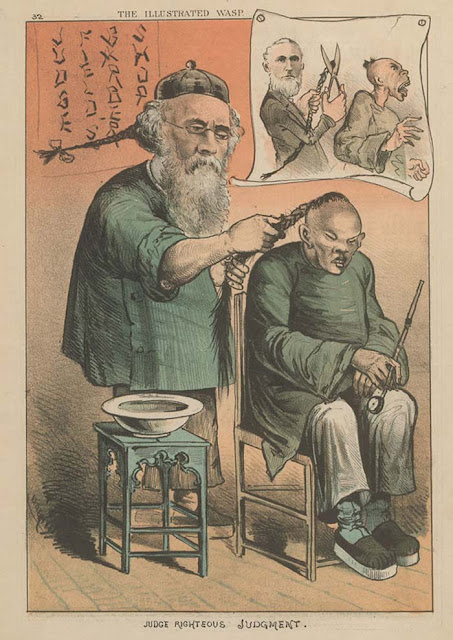 Posted by Chinese American Historian By Chance at 9:16 PM No comments: Links to this post

The Heathen Chinee Strike Back!


Bret Harte wrote a poem, Plain Language from Truthful James, in 1870, which later became more widely known as The Heathen Chinee. In brief, the poem describes how two white miners cheat a Chinese, Ah Sin, in a card game but the crafty Ah Sin outcheats them. But they discover his cheating and exclaim "we are ruined by cheap Chinese labor," and then proceed to pummel the hapless Ah Sin. 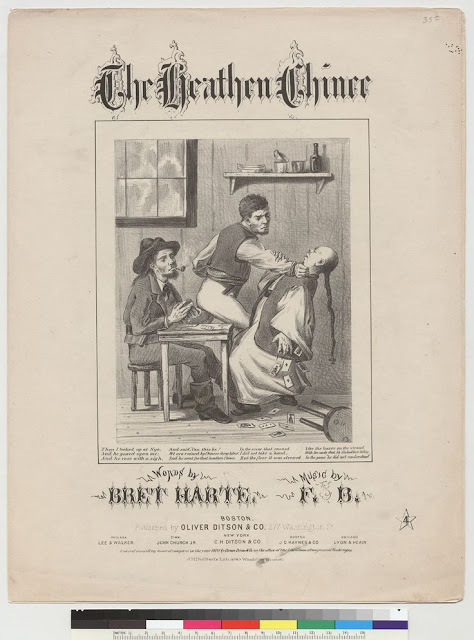 As noted in a previous post on this blog,

Bret Harte's personal attitude toward the plight of Chinese immigrants was sympathetic even though his poem might suggest otherwise.  The intent of the poem has been viewed as a satirical commentary on the hypocrisy of whites who cheated the Chinese but then attacked them for the same behavior. Nonetheless, the poem reinforced this negative image of all Chinese that was in keeping with the national animosity against cheap Chinese labor that led to the Chinese Exclusion Act in 1882, not too long after the poem was published.  The image of the heathen Chinee created by Harte's poem quickly became a popular term of derision of Chinese and reprinted in newspapers across the country even as late as the 1920s, half a century later.

A few years later, Harte wrote a less influential poem with a provocative title, "The Latest Chinese Outrage," designed to arouse curiosity about what terrible misdeed the Chinamen committed.
The poem described a confrontation in which "Chinee," 400 of them actually, give some ruffian white miners a taste of their own medicine after they repeatedly failed to pay their laundry bills. Led by Ah Sin, they take the livestock and possessions of the miners as payment.


The Chinese capture one miner, Joe Johnson, and force him to ingest opium, shaved his eyebrows, tacked on a cue (queue), dressed him in Chinese clothing, painted his face with a coppery hue, and stuffed him in a bamboo cage on which they placed a label that read "A white man is here" and left him hanging like ripening fruit.


And as we drew near,
In anger and fear,
Bound hand and foot, Johnson
Looked down with a leer!

In his mouth was an opium pipe--which was why


He leered at us so with a drunken-like eye!
They had shaved off his eyebrows, and tacked on a cue,
They had painted his face of a coppery hue,
And rigged him all up in a heathenish suit,
Then softly departed, each man with his "loot."
Yes, every galoot,
And Ah Sin, to boot,
Had left him there hanging
Like ripening fruit.

One wonders whether Harte, in writing this poem, was trying to make amends for all the harm his heathen Chinee character, Ah Sin, created for the Chinese. It would be unlikely that many if any, Chinese would have read the poem, but if they did, they might feel some vicarious vengeance. On the other hand, anti-Chinese whites might experience anger if they read it.  Unlike Plain Language from Truthful James, it had little impact on white-Chinese relations.

Posted by Chinese American Historian By Chance at 9:43 PM No comments: Links to this post

A Gold Mountain Dream Turned into a Nightmare 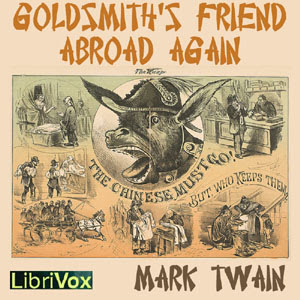 Mark Twain spoke up on behalf of Chinese immigrants and against their mistreatment. His brilliant satirical short novel "Goldsmith's Friend Abroad Again" is an effort to make his readers reject the racism against Chinese.   [This link is to the printed text.]

The novel was serialized in Galaxy Magazine over 1870-1.  The format involved seven fictitious letters from Ah Song Hi to his friend, Ching Foo.
In the first letter, Ah Song Hi is beginning his journey from China to Gold Mountain, full of optimism. However, his following five letters describe increasingly negative experiences ranging from unfair immigration fees, prejudicial mistreatment by San Francisco police, attack by a dog belonging to young men, being jailed, and not being allowed to testify in court because he was not white. Ah Song Hi's dream of Gold Mountain was actually a nightmare.

Note: The odd title for Twain's indictment of the mistreatment of Chinese comes from the celebrated 18th-century Irish author, Oliver Goldsmith, who wrote "Citizen of the World" in 1760 about letters from Lien Chi,  a fictional Chinese traveller in England, to provide an outsider's ironic and at times moralistic views on British society and manners.

The "Abroad Again" part of the title speaks to the many travel books Twain wrote that included the word, "Abroad" such as Innocents Abroad.

It is understandable why Twain used a title to acknowledge his debt to Goldsmith but unfortunately, it doesn't convey the content, namely, a biting criticism on the racism toward Chinese.


Posted by Chinese American Historian By Chance at 9:34 PM No comments: Links to this post

How Hop-a-long Cassidy Led Me to Discover Willie Fung

Hop-a-long Cassidy was not one of my favorite grade B cowboy movie stars, but I saw a link to one of his movies the other day. In a moment of nostalgic longing for my boyhood days when I was a devoted cowboy movie fan, I could not resist watching, at least part of it.
As the opening credits rolled by, I noticed that a "Willie Fung" was in the movie and wondered if he might be Chinese.  And my hunch was right.  He only had a few scenes and his lines were in spoken in stereotypical pidgin English. After all, he was only the ranch cook.
Still, I was curious to learn more about Willie Fung so I "googled" him, and much to my surprise, he had his own Wikiwand page. I learned Willie Fung, born in 1896 in Canton, played supporting roles in 125 American films between 1922 and 1944 even though he died in Los Angeles at the young age of 49 in 1945. The majority of his roles were in Westerns and dramas, and his filmography shows that he was most often was cast as a cook, servant, houseboy, and once a laundryman

Willie Fung was a pioneer Chinese American actor but not the first Asian American actor. George Kuwa (7 April 1885 – 13 October 1931) was a Japanese and American Issei (Japanese immigrant) film actor of the silent era. He appeared in 58 films between 1916 and 1931. He was the first actor to portray Charlie Chan on-screen, in the 1926 film serial The House Without a Key. Unlike Fung who had very small roles, Kuwa had the key role in the first Charlie Chan movie, a silent film. 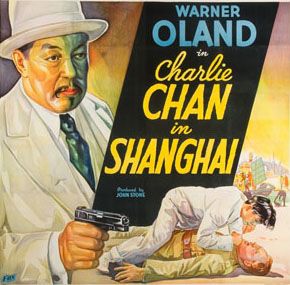 By 1931, Hollywood no longer used Japanese actors to play Charlie Chan, preferring a Swedish American actor, Warner Orland for all subsequent Charlie Chan movies.
Posted by Chinese American Historian By Chance at 10:20 PM No comments: Links to this post