Why Students Should Learn History 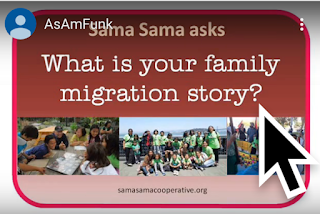 A similar lack of knowledge about another major part of American history, the internment of Japanese Americans during World War II, also exists among students as the video below demonstrates.


How can these glaring gaps in knowledge among students at a leading university be prevented? Can the introduction of this information earlier during elementary school be effective in correcting this ignorance?  One interesting example of such an effort is shown in the video below for a 4th-grade class in a school in California.

In 2015,  Lindi Li, a parent of a fourth grader, informed me about the adaptation of the popular hip hop song, Uptown Funk, by Bruno Mars for a lesson on Chinese American history at the Thousand Oaks, California, Elementary APA Heritage Month Assembly by Andra' Kavuma's 4th graders. Linda wrote the lyrics for their rendition, AsAm Funk, ably sung by her uncle, Steven Dorado, with choreography adapted from Michelle Obama's Let's Move for Uptown Funk.

Whether this engaging and imaginative approach of blending pop music with historical information to capture student attention will prove to have long-lasting beneficial effects on student knowledge of history requires a followup a few years from now.  It is worth a try!


Posted by Chinese American Historian By Chance at 10:16 AM No comments: Links to this post

An "Unknown Chinese" Being Interrogated At Angel Island


This iconic photograph portrays the ordeal that Chinese immigrants faced during the years of the Chinese Exclusion Acts (1882-1943).  This young Chinese is being interrogated by an Immigration Examiner in the presence of what appears to be a security officer and another man who might be an assistant taking notes on the testimony. Or, possibly he might be an interpreter (although he is not Chinese).  There is no one present who might be an interpreter so it seems likely that the Chinese is fluent in English.  It is not likely that he is a lawyer for the Chinese, given that he is seated next to the Examiner.  The boy, or young man, appears to have his right index finger extended and resting on an object, possibly getting finger printed. 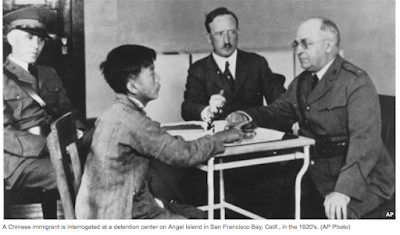 I have not been able to identify the name of the Chinese in this photograph that appears in countless articles about Chinese immigration experiences at detention centers such as Angel Island.  I think it is a generic image that people insert in their articles about the interrogations to convey the obstacles facing the immigrant, such as three adults against one child.  One source indicates that this Associated Press photo was from the 1920s, but the name of the Chinese boy is not provided.
It seems odd that there would be no other photographs of a Chinese being interrogated.  While dramatic, it is misleading to use this photograph to represent any and all young Chinese immigrant men.

UPDATE:  Less than a week after making this post, I found the announcement below that used this very image to publicize an event on the Angel Island Immigration Station.  Whoever this young Chinese boy is, his image strongly evokes the dire situation faced by Chinese entering at Angel Island.

Posted by Chinese American Historian By Chance at 9:51 PM No comments: Links to this post