I had the opportunity to give a dinner talk about Southern Fried Rice to an appreciative audience of about 60 members and guests of the Chi-Am Circle, at a Chinese restaurant in Cupertino in 2007, which included my two sisters and several long-time friends from college days.


Here are some excerpts of the talk

Posted by Chinese American Historian By Chance at 8:27 PM No comments:

My sister Mary Gee lived in Foster City and was influential in getting the Foster City Library to invite  me to speak about Southern Fried Rice.  Many of my relatives living in the area were able to attend.

A bizarre confrontation occurred during the Q&A, when a woman asked me where my parents were naturalized. After my reply, she accused me of lying. She insisted that census records showed my parents had been naturalized in Alabama, which was totally wrong.

After the talk, I discovered a CD on the table on top of my materials, but it was not mine. Apparently my interrogator had unobtrusively left this CD for me. I opened it afterwards and found that it contained census records listing a Chinese couple who shared our name, Jung, as being naturalized in Alabama.  However, these Jungs were not my parents.

Fortunately these types of odd confrontations are very much the exception as most of the interactions I have had with audiences has been very cordial and warm.
Posted by Chinese American Historian By Chance at 8:27 PM No comments:

What Led To "Chopsticks in the Land of Cotton: Lives of Mississipi Delta Chinese Grocers"

A curious thing happened at a talk I gave on Southern Fried Rice at the Chinese Historical Society of Southern California in 2007.  At the end, a Chinese who originated from the Mississippi Delta. Roland Chow, introduced himself to me, and urged me to consider writing about the lives of the Chinese in the Delta who almost exclusively were involved in one business, grocery stores. Taken aback by his suggestion, I hesitated since it is not a light matter to decide to write a book at a moment's notice.  Undeterred, Roland offered to put me in contact with many Chinese from or still in the Delta.  Over the next few months, I did some research and conducted some interviews with Delta Chinese and became fascinated by the story of how they ended in the Delta, what their lives were like, and what had happened to them over the past century.  I was able to establish instant rapport with the Delta Chinese I contacted.  Even though my "South" was somewhat different from their "South," we shared enough similarity in our perceptions and experiences that they felt comfortable that I could present an accurate picture of their lives.  Eventually, I wrote a social history of the Delta Chinese, "Chopsticks in the Land of Cotton: Lives of Mississippi Delta Chinese." 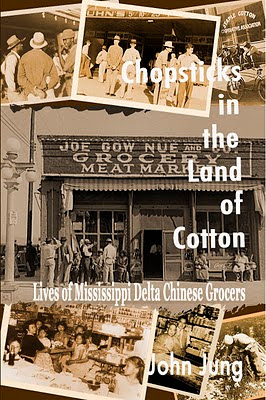 Posted by Chinese American Historian By Chance at 4:17 PM No comments:

The positive reception to my talk at the San Diego Chinese Historical Museum led to an invitation to return to speak about the Chinese Laundries book, especially since this venue has a number of artifacts, photographs, etc. related to the many Chinese laundries that used to exist in San Diego. 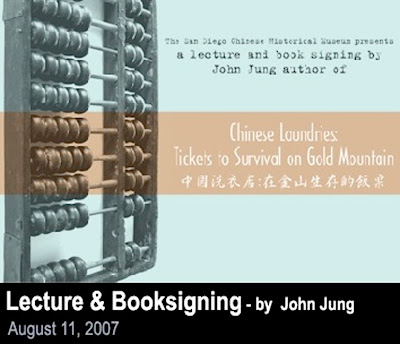 After the talk, I met Henry Wong who had a sister and other relatives that had operated grocery stores in Arkansas.  He proved to be an invaluable contact a year later when I was researching for a book about Chinese grocery store owners in the Mississippi River Delta.
Posted by Chinese American Historian By Chance at 4:03 PM No comments:

Much of what has been written about Chinese American history has centered on large Chinese communities or "Chinatowns" in coastal cities like San Francisco and New York, but the agricultural heartland has  also been of historical significance.   After my talks in the South and East, I had several opportunities to share Southern Fried Rice with California audiences in San Diego, Los Angeles, Berkeley, and Stockton as well as in the farming towns of Salinas and Hanford. My visit to these California cities showed me evidence of their strong connections to  Chinese cultural values and customs.

In May, 2007, I had a wonderful chance to meet with Chinese Americans in California's agricultural heartland in Hanford, then Stockton, and finally in Salinas to speak about Southern Fried Rice.
People were very gracious and friendly everywhere and very interested in my story.
In Hanford, my host was Camille Wing, the sister-in-law of noted Chinoise cuisine restauranteur, Richard Wing. His world renown Imperial Dynasty restaurant, located in the heartland of California's agricultural region was not readily accessible but for years celebrities and world leaders dined there. I received a tour of China Alley, the remaining part of Hanford's Chinatown, which included a temple and the Imperial Dynasty, which was no longer operating.
The talk started on a bad note as we could not get the laptop connected correctly to the projector, and after a delay, I went ahead and managed to deliver a coherent talk to the patient audience without the benefit of visual images to illustrate the presentation. 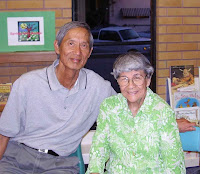 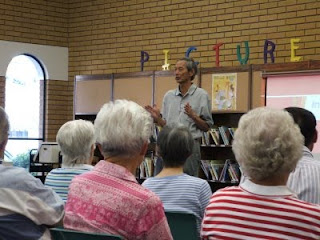 Chinese Cultural Society of Stockton, Dave Wong's Restaurant 5/19/07
My mentor and supporter, author historian Sylvia Sun Minnick arranged for my lunch presentation in her hometown, Stockton. The audience gave me a warm reception and many shared common experiences with me after lunch.

Salinas is also an important agricultural city but located closer to the Pacific coast than Hanford and Stockton which lie in the center of the state. En route, I was able to stop in Santa Cruz to visit my mentor and friend, the prominent scholar and professor emerita, Judy Yung and her husband, Eddie Fung who prepared a delicious lunch.
Prior to the talk, members of the Chinese American Citizens Alliance took me for dinner near the coast. The talk was held at the Salinas Confucius Church, which had a large community meeting room and adjoining kitchen.
Posted by Chinese American Historian By Chance at 3:11 PM No comments: Links to this post

What Led to Writing "Chinese Laundries: Tickets to Survival on Gold Mountain"

I never planned to write more than one book on Chinese American history, namely Southern Fried Rice, which was a personal document about my life and that of my family in Georgia. Since a memoir was based on personal experiences and memories, I didn't have to do voluminous research of previous research so in that respect, I felt 'comfortable' in undertaking that writing task.  However, my strong habits of research developed in my earlier career as a research psychologist led me to do a considerable amount of research about the history of Chinese in America, especially with respect to the role of the laundry as their dominant occupation in the last part of the 19th century before it was replaced by the Chinese restaurant.

What I learned from this research gave me the impetus to write a social history of the laundry. describing how and why Chinese entered this business in such large numbers and examining its influence on the lives of thousands of Chinese and their families across the U. S. and Canada.  To make the story come alive and not be just a set of facts, figures, and dates, I was fortunate to recruit 8 Chinese who, like myself, grew up in their family's laundry and aided in the labor that helped their family earn a living.  The result, "Chinese Laundries: Tickets to Survival on Gold Mountain, is part history and part personal journals of experiences of those who ran the laundries. 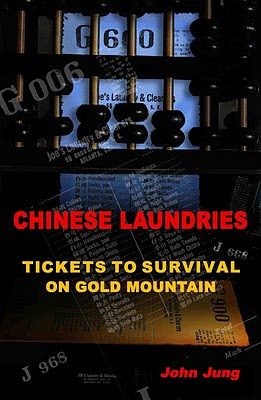 Posted by Chinese American Historian By Chance at 3:42 PM No comments: