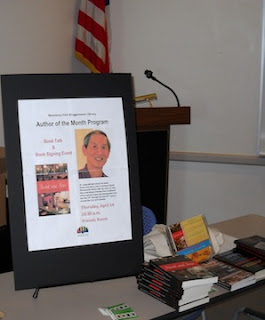 Sweet and Sour offered me a chance for a second visit to speak in Monterey Park at their public library. Unfortunately, the turnout was not as good as it was for my first visit last year to talk about my two books on Chinese in the American South.  You win some, you lose some, I guess.  One of the many challenges in doing book talks is the difficulty of predicting turnout. The topic was interesting as several other venues have had large attendance for a talk on the same book.  Perhaps holding the event at 10:30 in the morning was not as good an idea as we thought it would be. Or maybe there was some competing activity that day.  On the plus side, at least I didn't have far to travel to get to this site and afterwards I got to feast on some old style Toishan comfort food with friends at a nearby 1950s decor Chinese restaurant!
Posted by Chinese American Historian By Chance at 11:08 AM No comments: 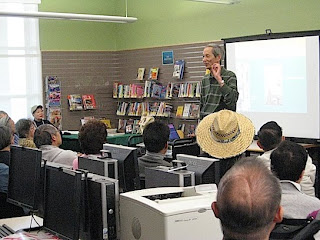 My second talk in Foster City, a place close to my heart where my sister Mary and her husband, Ed, and their family lived for many years. There was an engaged gathering of about 40 in the audience, some who had been to my other talks in the region in the past so it was nice to see familiar faces among the new ones. Several people who had been associated with Chinese restaurants in their families were present and shared their observations and experiences. And, my friend and contributor to the book with a narrative about her family's Oakland restaurant, artist Flo Oy Wong participated again sharing a lively account of that experience through her drawings and poetry. 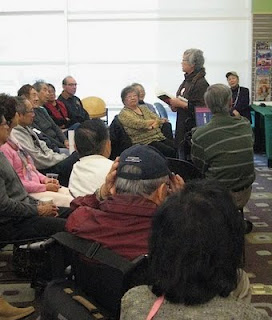 Posted by Chinese American Historian By Chance at 10:40 AM No comments: 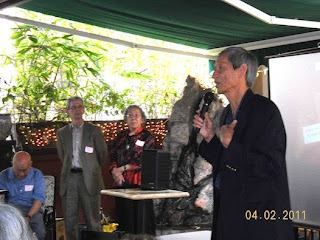 About a year ago, Hazel Wallace from the Long Beach chapter of the U.S.-China People's Friendship Association attended my talk on Chinese family restaurant history at the Cerritos Library. She must have liked it, as she referred other members including Stanley Yon and Rose Mary Thompson to one of my other talks, all of which led to an invitation for me to speak at one of their lunch meetings, where else, but in a Chinese restaurant! 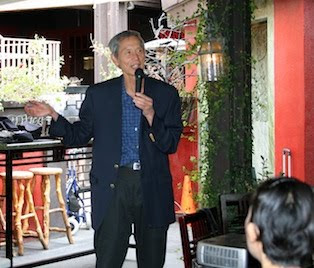 I have given talks at restaurants before, and sometimes the configuration of the dining room does not lend itself well to powerpoint slides. There is also stray noise coming from other parts of the restaurant that can be distracting or disruptive. My prior restaurant talks have been in an enclosed section and lighting can be lowered so slides can be readily viewed. However at the Long Beach presentation at the Forbidden City Restaurant, the space used was a partially enclosed patio area, so that there was the danger that the slides shown in early afternoon would not be easily viewed. Actually that part of the slide presentation was better than I feared, but there were a few anxious moments at the outset because they did not have the right cable to connect the projector to the laptop. This is not an uncommon problem, i.e., computer glitches, etc. 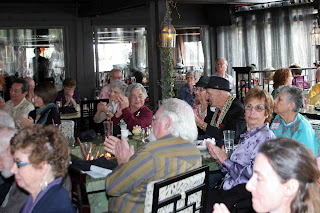 On the plus side, the audience was large (over 70) and eager to learn about the topic. The afternoon was most enjoyable, and a very nice way to spend my birthday!


Hazel Wallace, Past President of USCPFA-LB was generous in her compliments:
"Bravo! Wonderful talk on my favorite of all of your books! Thank YOU for being the object of our overwhelming attendance and I hope you sold a few books to the attendees! The food was good at the Forbidden City, the ambience was great, and you proved that you were the "man of the hour"! Thank you for "being" our event."
Posted by Chinese American Historian By Chance at 1:14 PM No comments: Links to this post