Most discussions, even today, of school segregration in Mississippi, and elsewhere, focus on black and white children with little or no mention of other children such as Chinese.

"Since the late 1800s Mississippi maintained that white schools were for caucasians only, and that since Chinese were not caucasian, it was ruled that they could not attend white schools. Chinese fought this situation in court, a generation before the landmark 1954 decision (Brown vs. Board of Education) that overturned school desegregation nationwide.  The Chinese lost their case, and the ruling was upheld by the U. S. Supreme Court, Gong Lum v. Rice, 1927.  Chinese had to establish their own schools to provide better education for their children with the assistance of local churches until  white schools finally began to admit them during the late 1940s in a few small Delta towns." 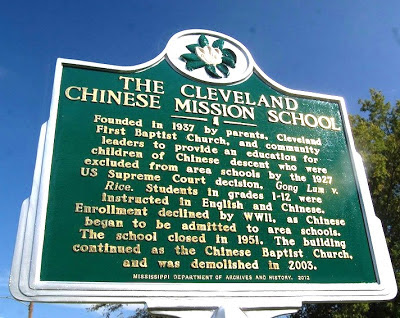 Overdue recognition from the State of Mississippi of how Delta Chinese coped with this problem came on Oct. 21, 2012 with the dedication of an historic marker on the site of the Chinese Mission School established in 1937 by the Delta Chinese with the support of the First Baptist Church and Cleveland community leaders to provide a better education for Chinese children than was available to them. Over 200 attended the ceremony, including some alumni from as far away as New York and California to celebrate the recognition given to this vital collaboration to educate Chinese children and to visit the newly created Mississippi Delta Chinese Heritage Museum housed at Delta State University.
It was a joyous homecoming for the Delta Chinese to pay tribute to their rich historic past.
Posted by Chinese American Historian By Chance at 2:41 PM 2 comments: 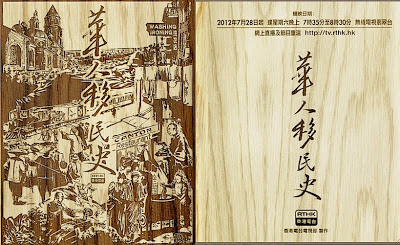 This ambitious project, although it could only scratch the surface of the history of Chinese in North America, nonetheless was a significant contribution by providing audiences in Hong Kong with an overview of the many difficulties that Chinese who left for Gold Mountain had to suffer, but were able to eventually overcome. This documentary serves as an invaluable historical resource for Hong Kong Chinese.

Below are links to the 5 programs on YouTube. Some of the commentary is in Chinese, and the subtitles are also in Chinese, but many of the interviews are conducted in English. I was a consultant and interviewee in the fourth episode which focused on Chinese laundries and restaurants.

Posted by Chinese American Historian By Chance at 10:24 AM No comments:

Before There Was "Lin-sanity"

The meteoric and sudden rise of Jeremy Lin to professional basketball stardom last year is of historic importance for Americans of Chinese, and other Asian, ancestry.  The attention he deservedly received should give interest to the story of the Hong Wah Kues, a Chinese professional basketball team that barnstormed the country in 1939-1940 playing the likes of the Harlem Globetrotters. 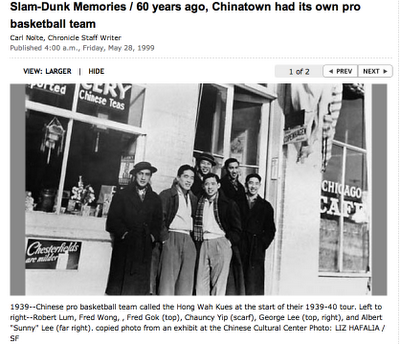 Sociologist Kathleen Yep published a book, Outside the Paint: When Basketball Ruled at the Chinese Playground.   that documents in rich detail the story of the brief shining moment of this band of spirited and talented Chinese athletes with an unconventional style that relied on speed and aggressive play to offset their size disadvantage against taller opponents.

Posted by Chinese American Historian By Chance at 10:34 AM No comments:

Chinese immigrants stayed culturally connected to their homeland in many ways, bonds that were especially vital in the face of the hostility and discrimination they suffered historically in America. Those living in Chinese communities that came to be referred to as "Chinatowns" had access to theaters when they flocked to see live Chinese opera on stage, as suggested in a documentary, A Moment in Time by Ruby Yang, showing how meaningful this experience was for them in a time before television.

Unfortunately, many Chinese lived in areas across the United States where their numbers were too few to have access to such cultural experiences. I grew up in Macon, Georgia, for example, where our family was the only Chinese in town.  My parents received Chinese newspapers in the mail, probably once a week, that was their window on news from China and about Chinese issues in the United States. Still, we did have ONE Chinese phonograph record, the Chinese National Anthem, that provided a smidgen of contact with China. When I was around 4 or 5 years old, my brother and I, would crank up the old manual phonograph to play this marching music known also as the "March of the Volunteers" and we would march around the room enthusiastically even though we didn't understand the Chinese lyrics.
A friend in Chicago, Bill Tong, recently told me about his more extensive contact with Chinese music in listening to his parents' records and tapes of Chinese music as he was growing up.  His father listened to Cantonese opera as well as Chinese pop music that his mother favored. In the Hoisan dialect it was called "see oy cook," or Shidaiqu (in Mandarin).  This Mando-pop  style of music based in Shanghai and sung in Mandarin fused Chinese folk songs with American jazz and enjoyed enormous popularity from the 30's through the 50's.  Among its biggest stars were Zhou Xuan, one of his father's favorite singers and Wu Ying Yin (one of his mother's favorites).

Wu Ying Yin's most famous song "Acacia Moon, Trinidad Sent" recorded in 1948. Wu Ying Yin (1922-2009) enjoyed a long career, singing into her 80's. In 2003, she performed this song in Shanghai that she popularized during the 1940's.
Despite separation by thousands of miles across an ocean from their homeland, Chinese immigrants sought ways to experience familiar and treasured aspects of their Chinese culture. Anti-Chinese sentiment was often based on their apparent unwillingness to assimilate to American culture. However, having nostalgia for one's homeland should not be seen as incompatible with acceptance of the host culture.  Furthermore, which is the chicken, and which is the egg?  Had Chinese been afforded equal opportunity, perhaps they would have more easily come to embrace American culture.

Posted by Chinese American Historian By Chance at 11:24 AM No comments: