New Chinese immigrants who knew little or no English were at a great disadvantage in everyday business and social interactions. One approach to helping them was to publish common phrases or expressions in Chinese along with the English equivalents.  One example is "An ANglo-Chinese General Conversation and Classified Phrases" book by Yee Shu-Nam published in San Francisco by the Service Supply Company.  It bears no data of publication but probably it was published in the early 20th century.  This well-intentioned phrasebook was of dubious value as any user of the guide would probably have difficulty searching through it for the appropriate expression quickly and it could only cover a very limited number of situations.

Take for example, the scenario below which presents a hypothetical dialogue between a non Chinese speaking customer in a Chinese restaurant and the Chinese manager when the patron received pork chops when he had ordered chop suey! 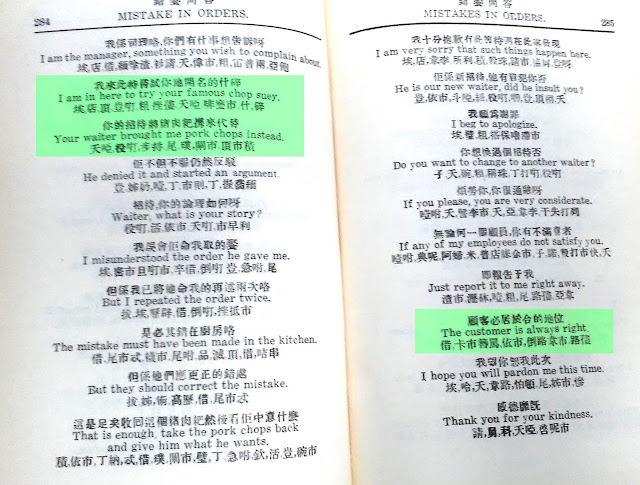 Chinese immigrants entering the U. S. on the west coast between 1910 and 1940 were detained for quarantine at the Angel Island Immigration Station where they also underwent intensive interrogations to determine if they were eligible for admission. Because of the Chinese Exclusion Act, which was in effect from 1882 to 1943, laborers were inadmissible whereas merchants and their family members were allowed to enter if they could provide documents and answer questions about their family and living conditions in their home villages in China.  Consequently, Chinese devised the "paper son" (or paper daughter) method by which a laborer might purchase the identity papers of someone, in many cases a fictitious person, who was eligible to enter. 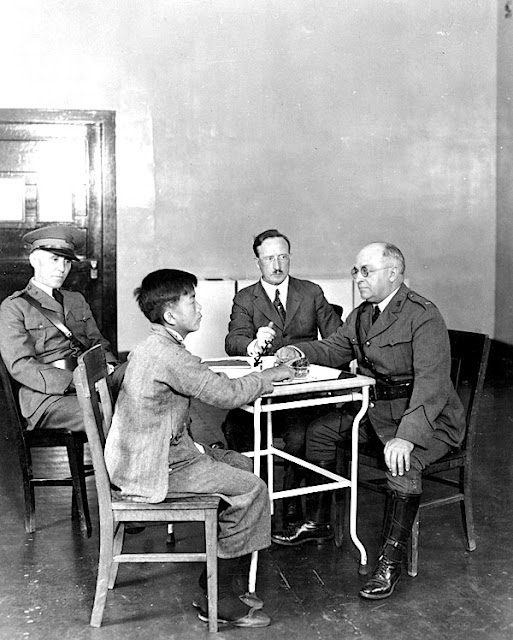 The above photograph of a young Chinese, probably no more than 12 years old and wearing slippers and an ill-fitting suit is the only photograph I have ever seen of an actual interrogation. It is used in many articles about Angel Island Chinese immigration.

The anxiety that this "poster boy" must have felt during this ordeal must have been overwhelming because one false answer and he might be denied entry and deported.  Since my parents both underwent these detailed and lengthy interrogations, I cringe seeing this photograph as I can imagine that they must have been in the same type of situation have to face the Immigration officer, a guard, and a transcriber. This young boy must have been able to speak English because there was no translator in the room.

But who was this boy, and was he a "paper son" pretending to be someone else or was he the real son of a merchant?  Did he gain admission or was he deported?  If he was admitted, where did he live, work, and die?

The December 2017 Angel Island Newsletter included an announcement of a forthcoming 2018 documentary, Chinese Exclusion Act, by Ric Burns and Li-Shin Yu that describes the paper son method in vivid detail.  My attention was drawn to the announcement which was illustrated with a  copy of the Identity Certificate of Jeong Hop, a 10-year old who arrived at Angel Island claiming to be the "son of a  son of a native."

At first glance of the photo, due to his youthfulness, I wondered if he might possibly the same boy in the 1923 interrogation photo. That would be a very long shot if it were true. However, the certificate showed that Jeong Hop did not arrive at Angel Island  until September, 27, 1940 and he was detained for 2 months until Nov. 25, 1940 when he was admitted.

As an interesting aside, he may have been one of the last Chinese to leave Angel Island because the facility was closed on November 5, 1940 and subsequent immigrants were processed at a location in San Francisco.  So, we still do not know the name and fate of the 1923 "poster boy."

As a consolation, I decided to see what I could find out more about Jeong Hop's case and what happened in his application.  I struck gold when I found an interview in 2006 that focused on his memory of his experiences at Angel Island.

The following excerpt of his interview when Jeong Hop was 76 years old shows how complicated family relationships were for some Chinese immigrants who had to use fake names on their false documents. 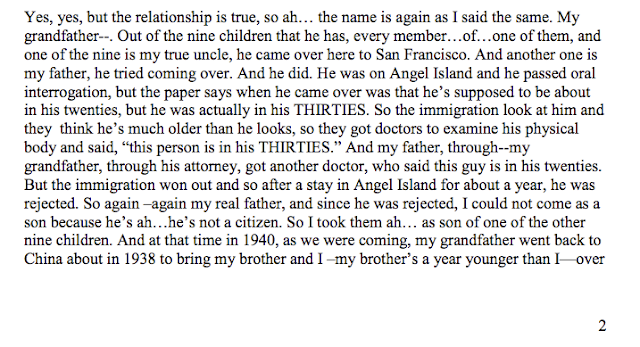 How did knowing he was using a false name affect Jeong Hop in how they felt about the deception?

Jeong Hop remembers very little about his life in the Angel Island Immigration Station.  Being only 10 years old, he was adaptable and didn't realize that he was being mistreated.  He had no strong expectations aside from knowing that he had to memorize all the family members and their relationship to him and to destroy his 'cheat notes' before he arrived in San Francisco on the President Coolidge in 1940.

In the mid 1950s when the U. S. offered a Confession Program, aimed to stop the use of the paper son entry method, that allowed Chinese to reclaim their real family surnames without penalty.  Jeong Hop gave a detailed account of how this affected his relatives. 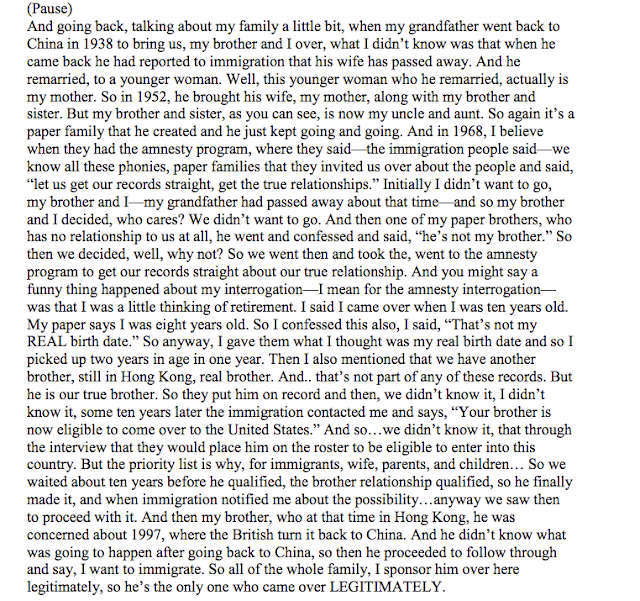 Jeong Hop pointed out to the interviewer that he actually was already a citizen before he came over because he was the son of a son of a citizen! 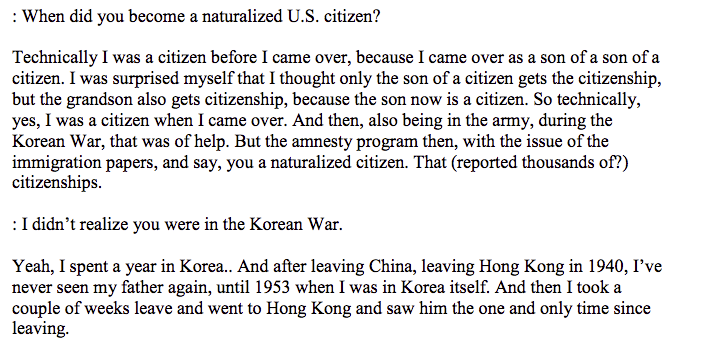 He did have strong feelings about the need for his children and grandchildren to know the history of Chinese in America, especially the Chinese Exclusion Act of 1882, which forced Chinese men to live in a "bachelor society" for decades.

Yes, yes, but the relationship is true, so ah... the name is again as I said the same. My
grandfather--. Out of the nine children that he has, every member...of...one of them, and
one of the nine is my true uncle, he came over here to San Francisco. And another one is
my father, he tried coming over. And he did. He was on Angel Island and he passed oral
interrogation, but the paper says when he came over was that he’s supposed to be about
in his twenties, but he was actually in his THIRTIES. So the immigration look at him and
they think he’s much older than he looks, so they got doctors to examine his physical
body and said, “this person is in his THIRTIES.” And my father, through--my
grandfather, through his attorney, got another doctor, who said this guy is in his twenties.
But the immigration won out and so after a stay in Angel Island for about a year, he was
rejected. So again –again my real father, and since he was rejected, I could not come as a
son because he’s ah...he’s not a citizen. So I took them ah... as son of one of the other
nine children. And at that time in 1940, as we were coming, my grandfather went back to
China about in 1938 to bring my brother and I –my brother’s a year younger thac things you brought wit
Posted by Chinese American Historian By Chance at 9:10 PM No comments: Links to this post