Memphis, A Launching Place for Chinese in the Mid-South in 1869

The abolition of  1865 presented a crisis for cotton plantation owners who relied on slaves to pick cotton. At a convention of planters in Memphis in 1869, there was a proposal to recruit Chinese as replacement workers in the fields. As the building of the transcontinental railroad in , many Chinese laborers on its construction were out of work.

There were opponents who objected to bringing "Orientals" to the South because "coolies" would be slaves.  However, the proposal to bring 1,000 Chinese involved contractual labor rather than indentured service. 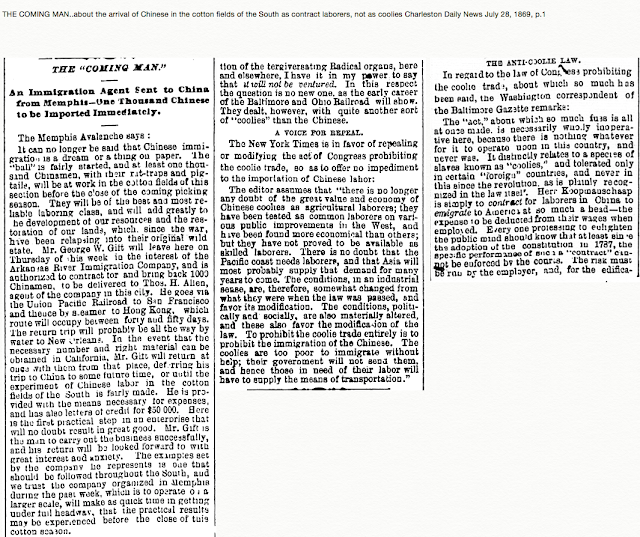 The Chinese who came did not work out well as field and soon they opened small family-run grocery stores in the region and throughout the Mississippi Delta. 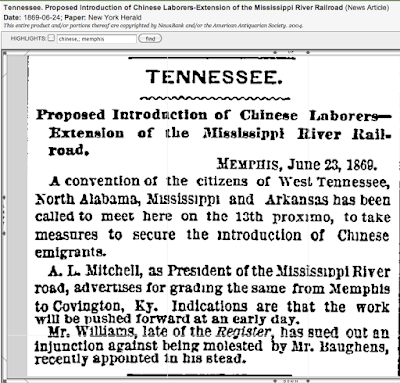 Other Chinese came in 1869 to work on a railroad between Memphis and Covington, Kentucky. It is possible that some of these Chinese settled in towns throughout the South where they opened grocery stores and hand laundries.

opened what was first Chinese hand laundry in  as noted by 1873 newspaper ads, only four years after to Memphis to work on plantations.


Posted by Chinese American Historian By Chance at 9:46 PM No comments: Links to this post

A Tale of Two Wongs of Historical Importance for Different Reasons

Wong Kim Ark (1873-?) is an example of the last type. He became an important person in Chinese American history more by circumstance rather than by any active role or action he .  Born in the United States to Chinese immigrant parents Wong was a cook who made a trip to China to visit his parents who had left the U.S. in 1890. He successfully reentered the U.S.  However, he made a second trip in 1894 to China and when he tried to reenter in   entry by the Collector of Customs because he was a laborer.

The Chinese Benevolent Association used Wong as a test case that went to the U.S. Supreme Court in 1898, (U.S. v. Wong Kim Ark 169 U.S. 849 1898arguing that because Wong was born in the United States, he was a citizen under the Fourteenth Amendment to the Constitution and could not from entry to the country. This concept became known as birthright citizenship."

This basis for citizenship has but upheld since Wong Kim Ark. The issue is relevant today because President Trump wants to eliminate this right provided by the Fourteenth Amendment to the Constitution.

Wong Kim Ark won the case but not because of any actions he . Wong the person denied reentry that advocates of Chinese birthright citizenship used to establish his status as a U.S. citizen because he was born in the U.S. even though his parents were not.

He tried to bring his four sons from China, but entry in 1910 on grounds he did not convince immigration officials that he was his real son. However, in the 1920s his three younger sons because as a U.S. citizen. Interestingly, there is little else known about Wong Kim Ark after the court decision. Even his youngest son, Wong Yook Jim, the only one who made the U.S. his permanent home did not know about his father's legal victory and historical significance until it in a Chinese language newspaper on the 100th anniversary of the Supreme Court decision.

Wong, the "father" of birthright citizenship, ironically, eventually returned to China in 1931 when he was 62 and never came back to the U.S. even though Form 430 below an intention to return, 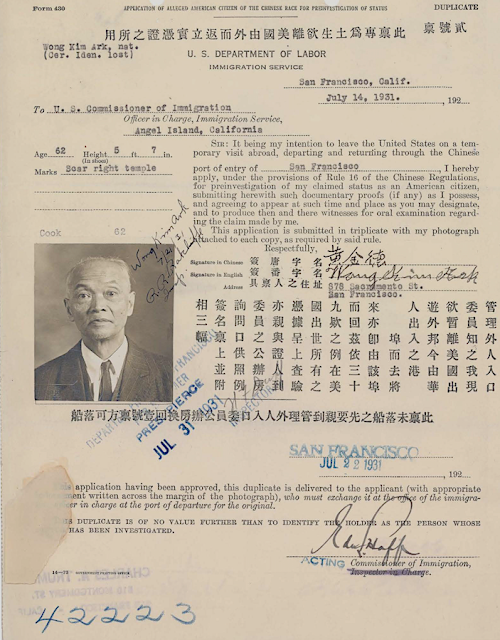 Only Wong’s youngest son, Wong Yook Jim, however, made a permanent home in the United States. Shortly after WWII, he received word from village elders in China that Wong Kim Ark had died.

In contrast, Wong Chin Foo (1847–1898) was an articulate Chinese who spoke and wrote English well.  During the latter part of the 19th century, Wong was an outspoken activist in defense of Chinese immigrants who faced discrimination and racial prejudice. He campaigned tirelessly across the country on behalf of the rights and better treatment or Chinese, fighting racist leaders of anti-Chinese actions such as , flamboyantly challenging him to a duel. him the choice of weapon: chopsticks, Irish potatoes, or Krupp guns. He boldly rejected negative stereotypes of Chinese as when in a lecture in 1877, he pointed out, “I never knew rats and dogs were good to eat until I learned it from Americans.” 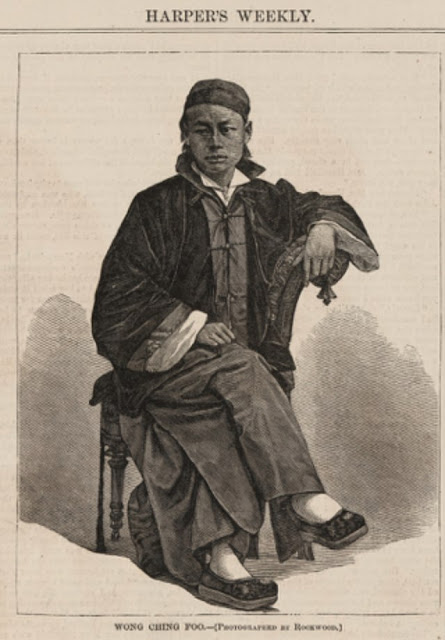 Wong Chin Foo actively made significant contributions in fighting for Chinese political and civil rights. establishing the Chinese Equal Right League which united the Chinese Americans to fight against the 1882 Chinese Exclusion Act. Wong established the first Chinese-language newspaper east of the Rockies, the Chinese American.

Whereas Wong Kim Ark was more of a pawn than an agent to the years of significant activism for civil rights by Wong Chin Foo, today the more important figure is Wong Kim Ark because of the continuing debate over "birthright citizenship."

In marked contrast, the work of Wong Chin Foo is not very influential on contemporary issues. After his death, Wong Chin Foo's writings , and he in the American press again. Despite his considerable efforts to gain the right to naturalization for Chinese, the ban continued for nearly half a century after his death.

Posted by Chinese American Historian By Chance at 8:29 PM No comments: Links to this post