The Comstock silver lode discovered in 1859 created an overnight  booming mining town, Virginia City, Nevada with a jump from 4,000 to 25,000 residents within a few years.

Chinese, who came to represent ten percent of Virginia City residents, referred to Nevada as Yin Shan, or "Silver Mountain," in contrast to Gum San, or "Gold Mountain," their term for California where gold was discovered in 1849 at Sutter's Mill. 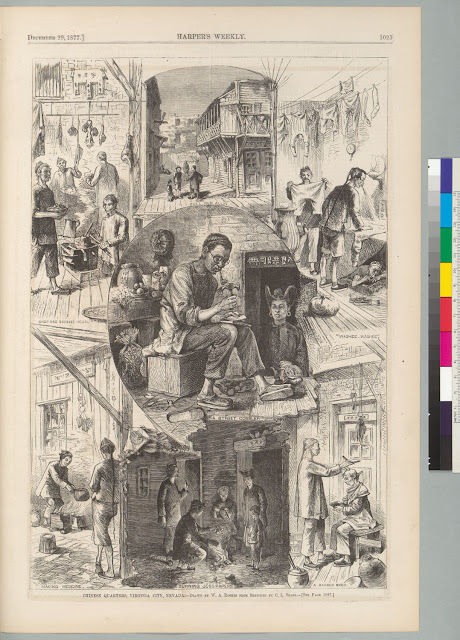 Whereas Chinese immigrants in many small towns across the country during the 1880s worked almost entirely as laundrymen, and then cooks,  Chinese in Virginia City were involved in numerous occupations as early as 1870.  Two sample pages from the 1870 Census shows Chinese were merchants, miners, laborers, laundrymen, cooks, gamblers, and harlots. 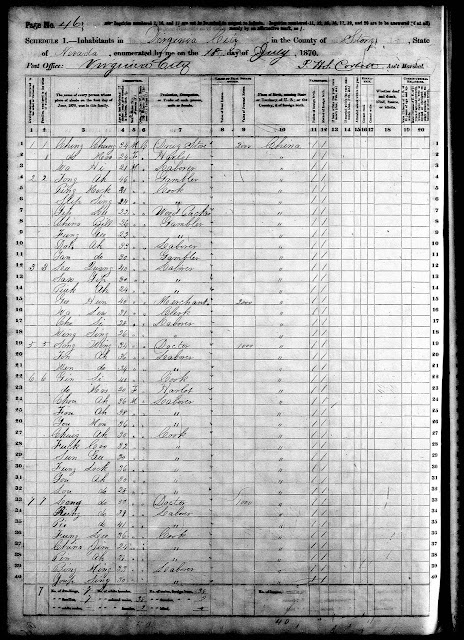 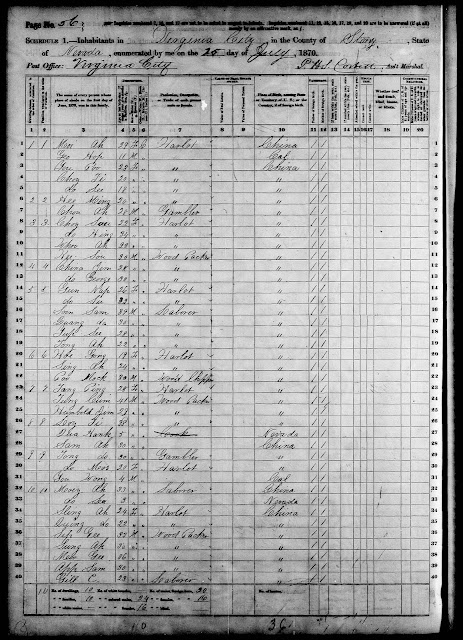 A decade later Virginia City was still thriving and there was a large increase in the Virginia City population, including Chinese, and other immigrants. A sample page from the 1880 Census lists Chinese doctors, restaurant owners, along with gamblers and prostitutes who, it might be noted  had been labelled "harlots" in the 1870 census. 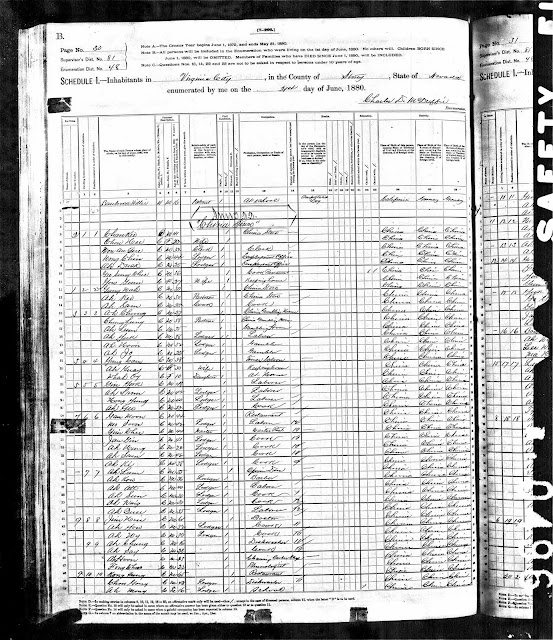 Eventually the silver mines closed, and during the 1880s Virginia City became a virtual ghost town as it suffered a rapid decline in its population and prosperity as the miners left.  The Chinese population also underwent a big drop.

Posted by Chinese American Historian By Chance at 10:30 AM No comments: Links to this post

Mother sponsors brother and his family from China

Family unification is one of the main goals of U. S. immigration policy.  Accordingly after my father died in 1973, my mother soon decided that she would apply to sponsor her brother to come over from China.  She had never met him as she immigrated to the U. S. from China in 1928 but he was not born until around 1937.  I am sure she would not have been able to make this major decision when my father was still alive because in Chinese families, men traditionally have control over these types of matters.

Nonetheless she felt that she should help her brother and his family consisting of his wife, two sons and one daughter come to the United States. Her brother, and his wife, in their 60s, understandably, were reluctant to come to the U. S. at their age especially since they did not speak and understand English but realized that it would be an opportunity for their three adult children.


The process was arduous.  She had to go through a lot of red tape in making the application which was delayed for many years before it finally was approved.  The petition she filed for one of her nephews, Kwan Wai Ping, illustrates just part of the required documentation. 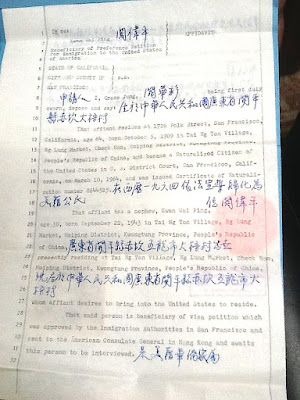 
Below is a picture my mother and her brother after he arrived. 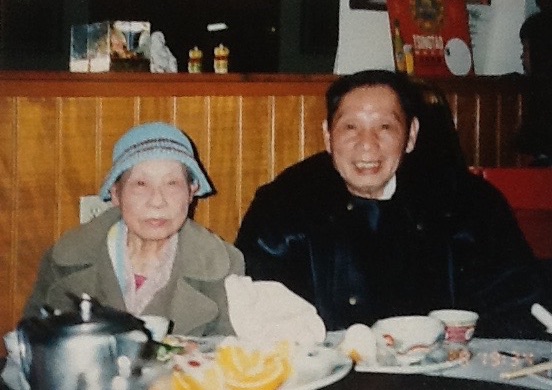 Posted by Chinese American Historian By Chance at 8:49 PM No comments: Links to this post

A visit to North Adams, MA., site of the Sampson shoe factory that hired young Chinese as strikebreakers in 1870


During my visit in 2016 to Williamstown, MA. in conjunction with a Williams College performance of South of Gold Mountain by the H.T. Chen Dance Center of New York, H. T. Chen took me to nearby North Adams, where in 1870 Calvin Sampson recruited 75 Chinese boys and men to work in his shoe factory rather than meet the demands of Crispin Irish workers who were on strike.

The original factory  building no longer exists and a new building is on the site.  Fortunately, a local historical museum had an informative display about the lives and experiences of these Chinese who travelled across the continent to a place where it is unlikely that any previous Chinese had ever been. 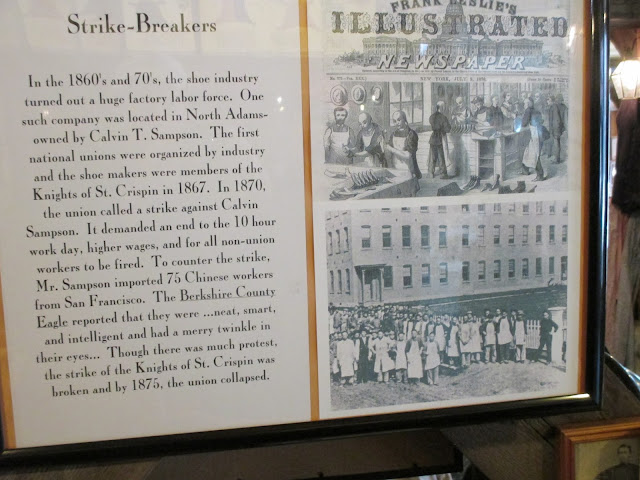 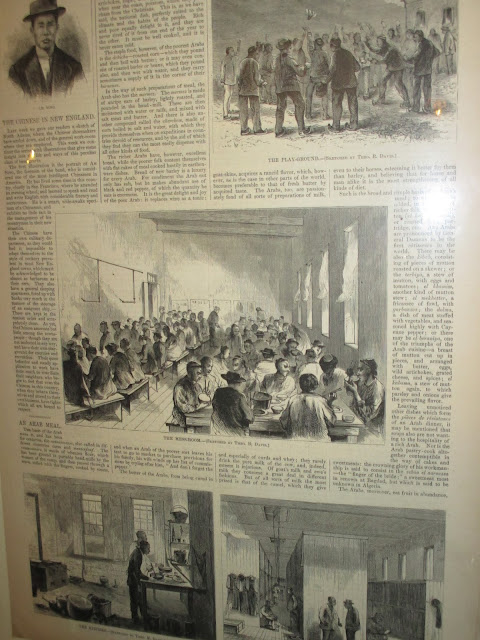 The young Chinese were quick to adapt to many American ways such as how to dress American style as illustrated in the photo below of three very dapper looking young Chinese. 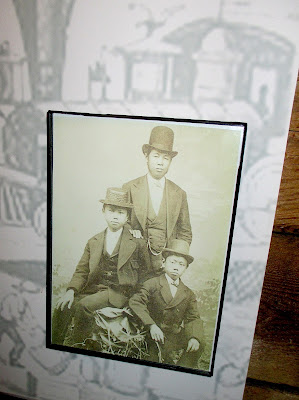 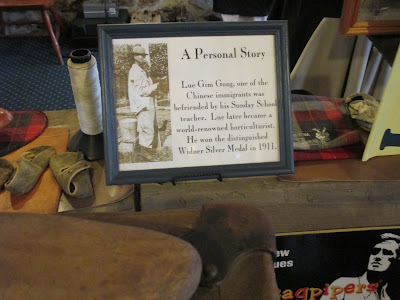 When he was 12 years old, Lue Gim Gong sailed from China to San Francisco with his uncle and some other boys where they lived briefly before moving to North Adams, Massachusetts to work in the Sampson Shoe Factory with other young Chinese boys and men as strikebreakers.
Lue Gim Gong was frail and became ill. The daughter of a local farmer, Fanny Burlingame, took him in and nursed him back to health. Lue became a Christian and a US citizen while under her care. In1886, he and Miss Fanny moved to DeLand, FL because Massachusetts winters were too harsh for him. He and Miss Fanny's brother-in-law Mr. William Dumville planted oranges and other fruit trees. Lue was a promising horticulturist and in1888, he produced a new orange which ripened in the early fall and which was bright and sweet called the Lue Gim Gong orange, which helped develop Florida's citrus economy.  There is a monument in DeLand, FL., in tribute to his genius.
Posted by Chinese American Historian By Chance at 8:08 PM 3 comments: Links to this post