Researching Chinese American history is difficult for me since I can't read Chinese and many materials of potential value are available only in Chinese. I could copy and paste small segments of a Chinese text into Google Translate, which is helpful, but inefficient.

Imagine my surprise, and joy, to discover that using the Chrome browser on my imac, I get an almost instantaneous translation of a webpage from Chinese into English! [This will not work with Firefox or Safari ..I did not test other browsers]

As a test, I used the google of China, baidu.com, and searched for Chinese Exclusion Act.  The screenshot below is the result, in Chinese.  Within seconds, as the second screenshot below shows, the page was translated automatically into English (more or less accurately). 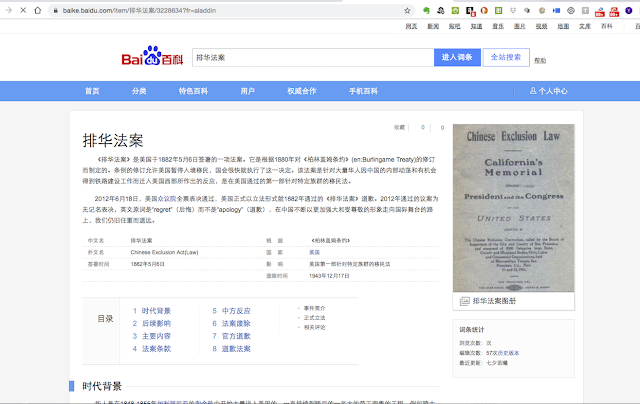 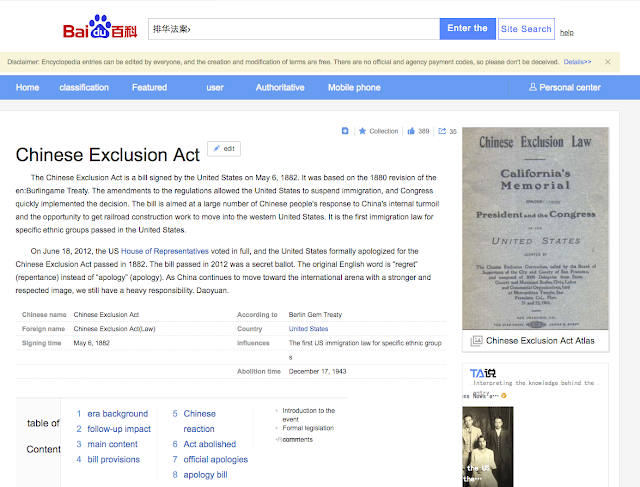 Posted by Chinese American Historian By Chance at 2:10 PM No comments: Links to this post

Chinese Labor Contracts: An 1870 Example for Chinese in Arkansas

When there was a need for a large supply of Chinese laborers, middlemen or labor contractors made arrangements to recruit and deliver the workers to the worksite. The labor contract was a detailed document outlining the work rules and conditions, housing, meals, pay, and other details.

Below is an 1870 labor contract for the first Chinese laborers brought to work on cotton plantations in Arkansas. The contract is signed in both Chinese and English. 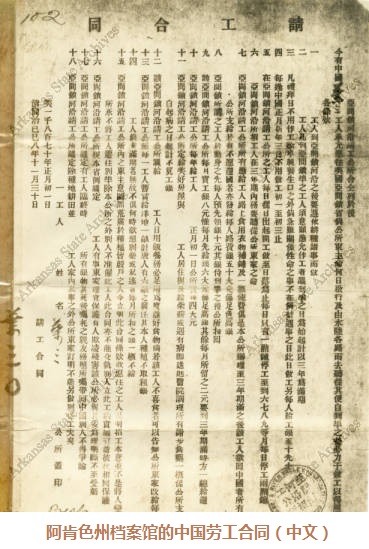 (1) After the workers arrive at the riverside of the Asian-Island Lock, they must do what they have to do.
(2) Workers who are locked in the inter-Asian zone shall be willing to accept the workers, and shall be counted from the beginning of the day of the blasphemy, and shall expire in three years.
(3) Anyone who does not work as a worker on Sundays, except for the health and well-being in the morning and evening, is not allowed to be banned. On the day of the incident, each day worked for the ICBC 50 sergeants (note: cents).
(4) There is no need to work during the first three days of the Chinese New Year, from the first day to the third day.
(5) Workers at the Ark Lock Riverside Job Office start daily from sunrise to sunset until sunset; only one hour of daily work stoppage. Until the sixth, seventh, eighth, and ninth months, the work is stopped at two o'clock.
(6) The workers recruited by the Yajian Lock River will listen to the orders of the public office in the three-year period.
(7) All the locks on the riverside of the A-Chas Lock River should be provided to the workers on the road for clothing and one (?) fee, which is handled by the office. After the expiration of three years , the worker wants to return to China, and all the tolls are paid by the office. If there is a reluctance to return to the country, it will also pay 50 yuan per person for the toll .
(8) The workers invited by the Asian Inter-Lock are allowed to receive the silver for 10 yuan in advance, and the silver waiter will be deducted after the servant.
(9) The Asian Inter-Lock Riverside Workplace is required to work for eight yuan a month, but the first six silver dollars are given to the company. The rest of the remaining monthly will be returned to the party when the three-year period expires.
(10) The Asian-Island Lock River asks the Workers’ Office to give workers every year: the first day of the first month of the first month of the public.
(11) The Asian Interlocking Riverside is requested to work for the beautiful houses and workers to live and give firewood; or to be admitted to the hospital in case of illness, all Xiebu foods are given to the workers. It is not counted as ICBC since the date of the onset of illness.
(12) The Asian Interlocking Riverside Consultation Office will provide workers with daily meals for their food and good food. If the worker does not like food, he can inform the owner of the office and change to a monthly discount of four yuan.
(13) Each worker of the Asian Interlocking Riverside Recruitment Office will temporarily enjoy an acre of land in the ocean, and the Tang Dynasty has a population of six acres, allowing him to plant without renting silver.
(14) If the worker is not satisfied, there is no reason why he or she will not want to think of another business or a private escape.
(15) The owner of the Asian Interlocking Riverside Requisitioning Work Center is intended to open up wasteland and plant people who are all in the family. Today, the terms of the contract are clarified, and the desire of the workers to go to work is not to change people. The office will never move workers away from others in this office. This contract can not be handed over to others. It is beneficial to have the same protection for each other.
(16) The Asian-in-law Lock Riverside Consultation Office is now a case of the province: the workers have something to protect the East, and some people are bullied and murdered. The public office must be properly clarified and will not suffer losses.
(Xvii) m-lock riverside please Workers Hall agreed: the workers were dying all the silver, the works according to friends and relatives after the death of his exhortations urge back to China, others do not have to argue.
(18) The Asian Interlocking Riverside Consultation Office agreed: In addition to farming the fields and private affairs of the workers' homes, the public office of the public office can't make other work.
A worker, name: Ye San (signature,  - brush thick circle, on the left side of the contract)
Sealed by the public: (Chinese and English engraved, round chapter, contract right corner)
Arkansas River Valley Immigration Company , Yasuo Lock Riverside Recruitment Office
The first day of the first month of the year
Qing Tongzhi has been in November 30, eight years
Remarks: 1. The original contract is not punctuated; 2. The original contract is Chinese traditional (one Chinese contract); 3, the contract is listed, from top to bottom, right to left (above); 4, written punctuation Symbol insertion or error; 5, the literature is ambiguous, individual words (?) are not recognized . 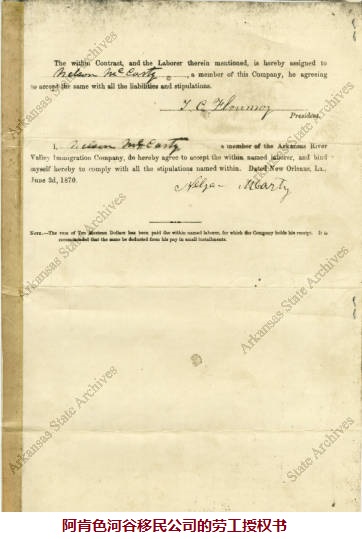 According to the contract, such as the name listed in labor , accepted by the Arkansas River Valley immigrant members of the company Nelson • McCarty. He will agree to accept the responsibilities and terms stated in the contract.
President: TC Floroy (signed)
I, Nelson McCarty, and the workers listed above, I agree to fulfill all contractual obligations.
New Orleans, June 3, 1870
(Signed) Nelson McAtty
Remarks: Each listed laborer has issued ten Mexican silver dollars, and the receipt is reserved by the company. In the future, the salary will be deducted in small amounts.
Reference resources:
Arkansas Multiculture Heritage Collection — Arkansas State Archives