White labor was usually the strongest advocate of Chinese exclusion in the late 19th century, but there were also instances where Chinese were pitted against other Chinese.  In 1895 in San Francisco, Sam Wah wanted Chinese workmen to pay for half the expenses of sewing machine repairs because he felt their carelessness contributed to machine breakdowns.  In protest, the Chinese men walked off the job. Undaunted, Sam Wah did not try to replace them with other Chinese men but instead recruited 41 white women to work under white supervision in their place.

Similarly in 1896, when Chinese women at a blouse-waist factory in San Francisco walked out over low wages, taking their sewing machines with them, the Chinese manager elected to replace them with white women, providing them with steam driven equipment that greatly increased productivity. 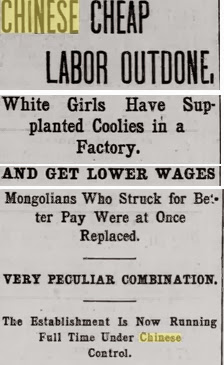 The fact that white women were favored because they were willing to work for less is a bit ironic because the Chinese were widely condemned for that very reason by whites in the past.


Posted by Chinese American Historian By Chance at 1:35 PM No comments:

In 1885 a Chinese laundryman, Wong Sing Lee, was found brutally murdered in Rome, New York. The laundryman had been stabbed numerous times but there was no sign that he had put up a struggle. The laundry had been ransacked and there was no money or jewelry to be found so it was assumed that robbery was involved as well.

Meanwhile, the New York Chinese community dispatched Detective Foo to work on the case, a move that, according to the newspaper reporter, was pooh-poohed by the caucasian police who a week later arrested a Chinaman in Burlington, Iowa, partly using identification by witnesses brought in from Rome.  However, local authorities found that he had a perfect alibi and released him.

Detective Foo's investigation located two boys who said they had seen the stranger in the laundry on the evening of the day the stranger arrived in town.   Foo also had a surgeon re-examine the wounds on the corpse. His analysis led him to conclude that a left-handed person had inflicted the wounds.

After his investigation, this Chinese Sherlock Holmes concluded that the assassin was a Chinese laundryman who could speak, read, and write English fluently, dressed well in European style clothes, and was left-handed.  Foo surmised that the robbery was a cover-up for the real motive for the murder which was to put the victim out of the way so the assassin could retrieve some documents in his possession.  He concluded that the murderer was strong because the blows that he inflicted required strength, coolness, knowledge of the body's most vulnerable areas, and probably the work of a professional assassin.

Detective Foo sent a circular to all the Chinese friends and relatives of the victim to find out if they knew of any quarrels, lawsuits, business troubles, or love affairs involving the victim. He learned from them that the victim was the chief witness in a bitter lawsuit between two Chinese merchants in Montréal and that his testimony was considered significant because he had in his possession letters and documents harmful to the case for one of the litigants.

Foo assumed that the murderer had come from Montréal so the detective made inquiries at stops along the railroad route. He finally found another Chinese laundryman who told him that around the time of the crime a Chinese man had come and asked him for directions to the address of Wong Sing Lee. The stranger said that he came from Montréal and he was a cousin of a rich merchant there named Hong (that man was the litigant whose case would have been damaged had the murdered laundryman testified).

Foo then went to Montreal summoned the close acquaintances of the merchant, Hong, and gave them a description of the crime. He inquired which of Hong's friends and relatives wore European clothes and they all agreed that Fang Ah You was a likely suspect.  Detective Foo got a search warrant and went to Hong's place of business.  Everyone there denied knowing the whereabouts of Tong Ah You.   However, upon searching the premises thoroughly, the criminal was found hiding in a concealed room in the cellar of the establishment.  So within 48 hours after being on the case, Detective Foo was able to solve the crime.
Posted by Chinese American Historian By Chance at 7:30 PM No comments:

In America, Li Hung Chang (also Li Hongzhang) is not a well known historical figure, but he was an influential diplomat for many decades during the Qing dynasty.  That fact is lost sight of as we know him best for his apocryphal role in creating the popularity of chop suey among non Chinese, an incidental outcome of a dinner he had during a diplomatic visit in 1896 to the United States, but one that became a turning point in the wider acceptance of Chinese restaurant cuisine among non-Chinese.

On the world stage, Li Hung Chang had an impact on international relations. He was a key influence on determining foreign policy that affected the balance of power in Asia among China, Japan, and Korea at the end of the 19th century. Li tried to stop Japanese expansionism in Manchuria and fell from favor after the Chinese loss in the 1894-5 Sino-Japanese War, an outcome that still reverberates today as it led to Japan establishing control over Korea in addition to seizing Taiwan as well as the tiny Senkaku/ Diaoyu islands that led to a confrontation between China and Japan in 2010.

His image in China remains controversial, with criticism on one hand for political and military mistakes and praise on the other for his earlier success against the Taiping Rebellion, his diplomatic skills defending Chinese interests in the era of unequal treaties, and his role pioneering China's industrial and military modernization. Critics of Li Hung Chang felt his decisions were faulty, i.e., stunk like 'smelly shoes' as symbolized in the image below found on a wall in San Francisco Chinatown in 1912 showing two Chinese men holding their nostrils in front of 'a pair of shoes worn by by Li Hung Chang in escaping from Japan.'

A mystery surrounds this wall posting making fun at Chang, however. The victory of Japan was in 1895 and Chang died in 1901, but the still photograph from a film of the 2 men mocking Chang was recorded in 1912, over a decade later. Of course, it is not known in what year the image was put on the wall. In any case, the defeat was indeed a bitter pill for this image to still be posted and elicit such interest after so much time.

And exactly what was the purpose of this wall full of a variety of proverbs and clever epigrams? Who created it, where was it located, and how long did it remain? 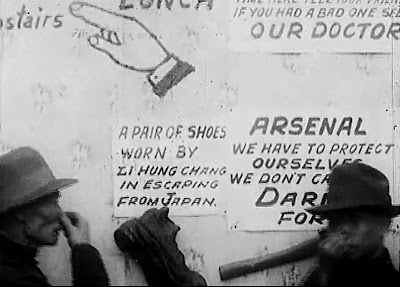 Posted by Chinese American Historian By Chance at 8:55 AM No comments: