Were "Chinese Abused" in Rosedale, Mississpipi, in 1900?

Jean Pfaelzer's Driven Out: The Forgotten War Against Chinese Americans amply documents the violent expulsion of Chinese from many communities on the west coast during the late 19th and early 20th century.  Fears that Chinese were taking away jobs from whites and sending money back to China rather than spending it here were major motivators.

However, such hostile and aggressive actions were not limited to that region of the country as reports of anti-Chinese violence came from places where the Chinese were so few in number that they could hardly have posed an economic threat. On Aug. 16, 1900, the Pawtucket Times in Rhode Island published an report, CHINESE ABUSED, originating from New Orleans that violent attacks against Chinese had occurred in Rosedale, Mississippi and that the beating of one "Chinaman" at Mellowdale had led to the arrest of several white men.

These attacks prompted a delegation of Chinese merchants to seek a meeting with Mississippi Govenor Longino requesting protection as all Chinese in Bolivar County had been ordered to leave the country within 5 days, notwithstanding the fact that they would have to abandon their property.  The Governor wrote leaders of Bolivar calling their attention to the problems and urging them "to take hold of it."*

No subsequent reports seem to exist about the aftermath of the 1900 incidents. Given that Chinese merchants operated grocery stores in the following years in Rosedale and other parts of the Delta, calmer heads must have prevailed. Although the efforts to expel the Chinese failed, they were not exactly welcomed either.  Rosedale was the same town where Gong Lum, a Chinese grocer, tried without success in the mid 1920s to enroll his daughters in the segregated white school in a case that went all the way to the U. S. Supreme Court, Gong Lum v. Rice, 1927 that was denied.

*However, the New Orleans Times Picayune newspaper, the alleged source of the Aug. 16, 1900 article about problems faced by Rosedale Chinese, published the article below on Aug. 17, 1900 in which it stated the earlier article was in error and that the three Chinese merchants in Rosedale "enjoy all the privileges, and have the same potection as any other law-abiding citizen." 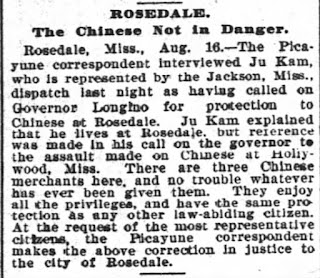 Posted by Chinese American Historian By Chance at 12:12 PM No comments:

Counting How Many Chinese Live in Chinatown

What is going on in this photograph from New York Chinatown in 1925?  Perhaps the white man is asking the Chinese man where he can find some good chop suey? 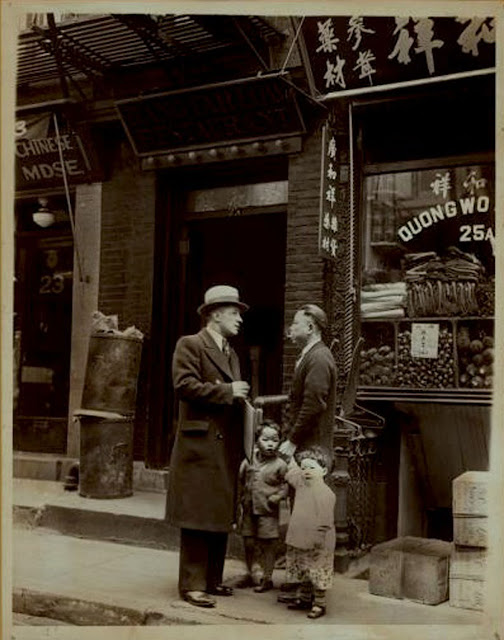 Well, actually the photograph shows a white census enumerator speaking to the Chinese man with two young children on a New York Chinatown street.  One wonders whether he is  seeking directions,  just having a friendly conversation, or actually conducting a census interview right on the street.  After all, living quarters in Chinatown were pretty crowded and Chinese may not have been eager to allow white strangers into their places of residence.  If he is collecting census information, one wonders whether the Chinese man has sufficient command of English to understand the questions.  And, whether he is anxious or suspicious about the uses that the data will have, especially if he is an illegal immigrant?

U. S. Census data serves many useful purposes for different fields of research and application including demography, social policy, history, immigration, migration, and genealogy. Given the difficulty and expense of locating people at their residences, there are still many people who are not counted and their demographic, occupational, and familial data are missing.  Such issues are not as troublesome if one is primarily interested in determining general patterns or relative counts of the size of subgroups, but can be disastrous when one is searching for specific individuals.

I found a fascinating blog post recently (first of nine posts) by writer S. Tremaine Nelson describing how he and two friends, one an artist and the other a photographer, made some naturalistic or ethnographic observations in a small public area, Columbus Park, in the heart of New York's Chinatown.  His blog post provides transcripts of their comments and interpretations of the observed patterns of behavior and social interactions among people, accompanied by wonderful candid black and white photographs.  Their work provides a qualitative portrait of the Chinese community in contrast to a census enumeration which focuses on quantitative aspects. Nelson wrote:

The part of Nelson's post that grabbed my attention was his explanation for how he became interested in making his study of Chinatown daily public life.  I am only going to describe these background experiences that led the author to decide to make the naturalistic observations in the first place because those experiences illustrate some major weaknesses of census data collection that are rarely discussed.  I will not discuss their actual observations and analyses, intriguing and enlightening as they are, but I encourage you to read the posts in their entirety,

Specifically, in 2010 Nelson worked for the Census Bureau in New York's Chinatown. He was struck by the huge disparity in the count of residents (15) that a field-worker obtained and the count (70) that a Chinese-speaking co-worker obtained from followup phone calls made to check on reliability of results at a single address that served as a dormitory where Chinese male workers rented bunks, stacked four high in a 10 ft. x 10 ft. room, by the hour.

Nelson described the procedures used by the Chinese-speaking coworker.

Thus, 'residents' only spent a few hours at this dormitory, with different shifts of workers sleeping there at different hours throughout the day. By taking samples at different hours, the count continued to increase whereas a single sample would yield a much smaller count.

This example illustrates one of the many unforeseen problems that can yield inaccurate census information.  If the census enumerator had knowledge of the living conditions of working men in Chinatown, the undercount might not have occurred.


Posted by Chinese American Historian By Chance at 12:44 PM 2 comments: