Chinese Americans Do Not All Look, Think, or Act Alike

What exactly defines a "Chinese American?"  The term is generally used, and accepted, as if people labelled as such are very homogenous. Compared to the distant past, say, the 1930s, the variety of people who could be categorized as, or call themselves, "Chinese Americans" has become increasingly more varied as the "face" of Chinese in America has changed greatly since the liberalized 1965 immigration law.

Accordingly, one might think the content of Chinese American history would be more varied to reflect the many subgroups of Chinese coming from different parts of China and other parts of the world. Compared with the earlier immigrants from Guangdong, mostly poor, less educated, and speakers of dialects of Cantonese, many of the recent immigrants from Taiwan, Hong Kong, and mainland China are wealthy, educated, Mandarin speaking professionals.  There are also growing numbers of Fujianese immigrants at the other end of the socioeconomic ladder. These groups are arguably all Chinese. To what extent do these groups interact with each other socially, politically, culturally? How well do they get along with each other, how much are they aware of each other? Why or why not? My observations suggest they do not mingle much and may even not feel much respect toward each other.

A different, but related issue of importance, is the relationship between Chinese in China and  Chinese in America, especially those born or long time residents in the U. S.  Although the Chinese in America and those in China are worlds apart in many respects, many non-Chinese tend to see us as members of one large group, Chinese.  And, while most American Born Chinese (ABCs) and even some Fresh Off the Plane (FOPs) and older Fresh Off the Boat (FOBs) experience some pride in many aspects of China's improved world status, we recognize that many policies and practices of Chinese in China are deplorable and dangerous.  And, what is worse, is that as U. S.- China relationships go, so will the way that we Chinese in America will be treated, or mistreated. If you doubt, just recall what happened to Japanese Americans after Pearl Harbor. History is known to repeat itself.

The important impact of history can also be seen in our daily personal lives.  Many of us of a certain age have or had parents who were immigrants from China who came during the Great Depression and lived during World War II, and the Cold War, etc.   A"generation gap" existed between them and us that involved differences of values, facility with English and Chinese language, etc.  Now we have grown up, and most have become parents, (and for many, grandparents), we can see that there is still a "generation gap" between us and our adult, or adolescent, offspring but it is qualitatively different from the one that existed between us and our parents. Why? Because the historical era during which each generation grows up is typically quite different.  My parents grew up in difficult times in China while I grew up during the prosperous post WW II boom times.  My children, in turn, grew up in the 70s and 80s, which were markedly different from the 50s.

This is a long-winded way of raising this question:  How was the relationship that you had with your parents different from the one you have (had) with your children? Implicit in this comparison is the impact of history.  That is, what was going on in the world when you were growing up is quite different from the world in which your children grew up.  History tries to explain the past, but not always accurately, since it is continually rewritten, but my real question is whether we can use history to predict the characteristics of Chinese in America in the future.
Posted by Chinese American Historian By Chance at 8:10 PM No comments: Links to this post

Most Chinese laundrymen probably did not have the time, skills, or inclination to compete in bicycle races but in 1897 Foo Lee of Niles, Michigan, not only competed against "Americans" in a race but he beat them handily.  The New York Times article concluded: "Sporting men are trying to induce Foo Lee to give up the laundry business and devote himself to racing."

News of Foo Lee's feat was spread across the country in newspapers in large as well as small towns across the United States.  Many of the headers referred to him as "Chinaman" and some had a condescending tone such as "No More Washee."
There was no further news about Foo Lee and subsequent cycling triumphs so it might be assumed that he resumed his occupation as a laundryman in Niles, Michigan after his brief moment of "Linsanity." 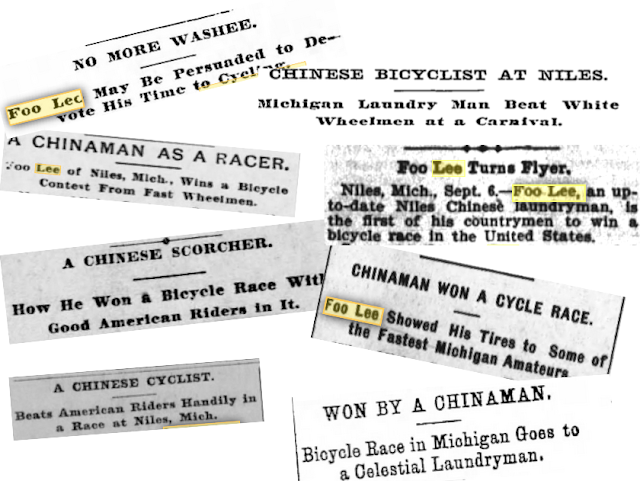 Posted by Chinese American Historian By Chance at 11:32 AM No comments: Links to this post