Most accounts of victimization of Chinese involve white perpetrators.  However, it must be recognized that sometimes it was other Chinese who ruthlessly exploited the plight of early Chinese immigrants to their own advantage. For example, the shortage of Chinese women immigrants which was exacerbated by the Chinese Exclusion Acts that started in 1882 provided an opportunity for profit from Chinese women forced into prostitution.

In San Francisco, Donaldina Cameron of the Presbyterian Chinese Mission became a legendary crusader who devoted her life to locating and rescuing, at great risk to her own safety, countless Chinese women who had been trapped into becoming sex slaves.

A description of her role was published in 1922 in a Portland, Oregon, newspaper when she made a visit there. The sensational headline highlights how Chinese used 'dark and tricky' ways to enslave young Chinese girls. 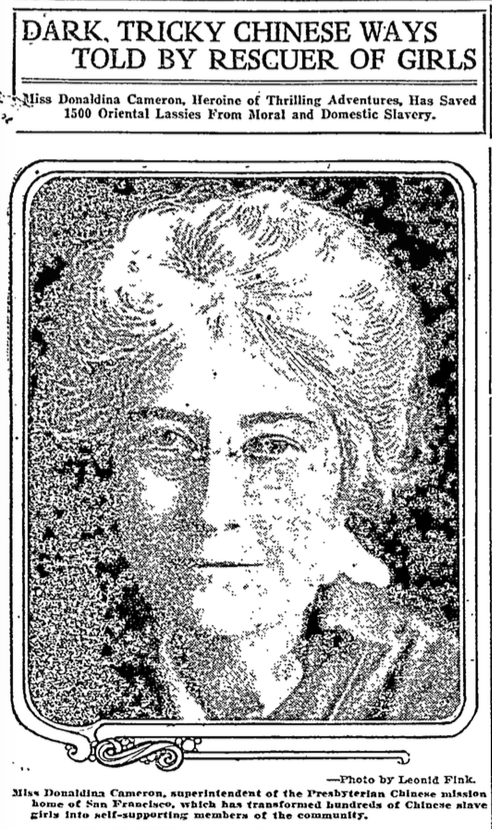 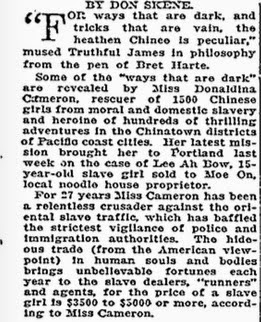 The article summarizes two cases of young Chinese women that Donaldina Cameron snatched from the clutches of their slave masters. 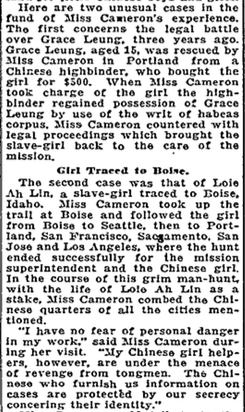 The mission house in the heart of San Francisco Chinatown where Donaldina Cameron hid and protected rescued girls and women is named in her honor. Its function has changed since her time and serves as an active community resource center serving Chinese of all ages and backgrounds, especially youth, elderly, and victims of domestic abuse.

Although her work was in the San Francisco Chinatown, Miss Cameron is buried in southern California. http://chineseamericanhistorian.blogspot.com/2012/04/ching-ming-remembrance-in-los-angeles.html


Posted by Chinese American Historian By Chance at 1:21 PM 3 comments: