In the spring of 1918, news was reported that a substantial portion of Chicago's Chinatown will invade Munro and Juno counties for the purpose of farming certain marsh regions, stating "the Chinese will desert the laundries of the Windy City to brave the cold and raw spring of chilly Wisconsin." The objective of the yellow men will be agriculture. They intend to raise humble "Spud," the odoriferous onion, the carrot, the radish, and  other American vegetables before the summer has progressed far.

Daniel Burkey, a Tomah land dealer closed contracts for several hundred acres of land with Hip Lung, the unofficial "mayor" of Chicago Chinatown. All leases and options are in the name of Hip Lung and the new organization will be incorporated as the "Chinese American Farming Company." They plan to give each farmer 20 acres.  The 1918 crops will be potatoes, onions, celery.  Chinese will be furnished with farm implements, seed, and horses but they will be required to hire their own labor.

Hip Lung proclaimed, "Give the Chinese Wisconsin for farming purposes and the rest of the country can turn to the business of beating Germany!"  Score one for Chinese enterprise!
Posted by Chinese American Historian By Chance at 9:07 PM No comments:

Frequency of Ching Chong and Chinaman's Chance in Books

The frequency of occurrence of racially charged terms such as "ching chong" might be a reflection of societal attitudes toward Chinese.  One quick, but very rough, gauge of anti-Chinese sentiment might be historical trends in the occurrence of such terms in books.

Google's Ngram viewer provides such data, but it does not examine the context of the occurrence, only raw frequencies. Nor does it examine newspapers or other media. So,with that warning, here is a chart for occurrences of "ching-chong."  The derisive phrase has shown a consistent pattern rising slowly from the 1930s to mid 1960s and then rising sharply to the present.

For comparison, "Chinaman's chance" is included.  It was not an epithet but rather a metaphor for a variety of 'lost causes' or hopeless situations such as that which Chinese suffered from racism.  Its peak frequency was in the 1930s, perhaps due to the Great Depression, dropped in the 1950s, a period of prosperity. It peaked again in the 70s and then has declined and leveled off as of 2000.

In summary, 'ching chong,' a mocking taunt, has increased over the last 70+ years. How well it can serve as a barometer of anti-Chinese feeling is ambiguous and it needs to be compared with other indicators.  In contrast, the metaphorical 'Chinaman's Chance' has fluctuated perhaps with the hopeful or hopelessness of the era.

At the bottom of an actual Ngram chart (not on this jpeg image), if you click on the years, you can see excerpts from books showing the actual context of the term.

One other note: the high frequency of "Chinee" was largely due to the popularity of Bret Harte's classic  1870 "Heathen Chinee" poem and to a lesser extent, "Jolly Chinee" fairy tale children's stories by E. Veale (1896). 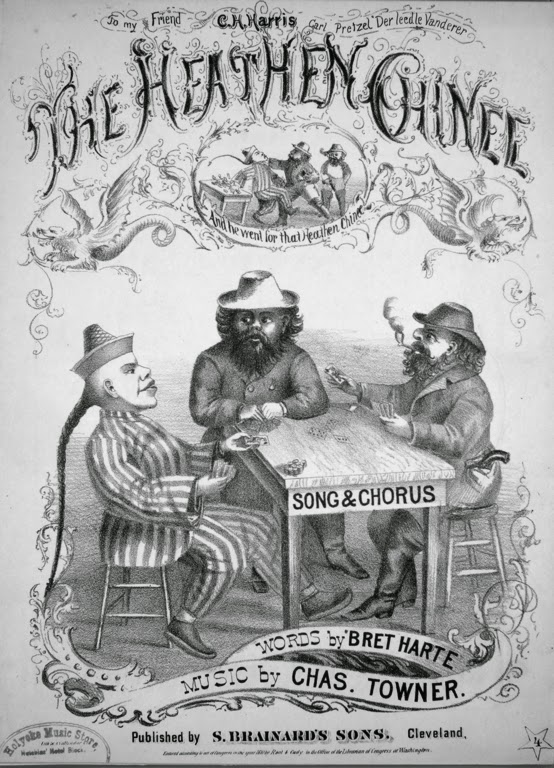 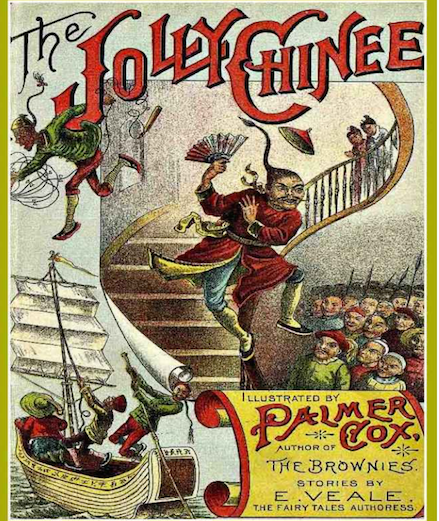 Posted by Chinese American Historian By Chance at 11:40 AM 1 comment:

Chinese to the South 2. But Will The Chinese Come?

In 1869, interest in bringing cheap Chinese labor to many parts of the Deep South was growing rapidly. They were sought as cheap labor for work in cotton fields, farms, rice fields, and construction of railroads and canals.

But how likely would it be that the Chinese would come to a region where there were so few other Chinese?  If they were in California, would they be willing to leave Chinatowns to go to places where they would be among the very few Chinese?

Although the views of a Chinese merchant in New York, Choy Chew, were those of only one individual, he did raise some important factors that might affect the success of recruiting Chinese for the South that made him skeptical.

In a more extensive 1869 report in the New York Herald, reprinted in the Georgia Weekly Telegraph, Choy Chew argued that Chinese would be reluctant to go South because "Chinamen like to die at home," alluding to the fact that San Francisco is much closer to their homeland in China. They "want to make all the money they can and then return" and therefore  "do not care to go very far away from San Francisco if they can help it"

Chew did concede that how well the first Chinese that went to the South were treated would be a big determinant of whether "millions will go there."


Posted by Chinese American Historian By Chance at 1:53 PM No comments:

Chinese To The South 1. Recruiting

Chinese immigrants who came in large numbers to California, attracted by the discovery of gold in the Sierras in 1849 initially stayed mainly on the Pacific coast. As opportunities in mining soon declined, thousands of Chinese laborers were recruited to help build the Central Pacific section of the transcontinental railroad.
Upon its completion on May 10, 1869 at Promontory Point, Utah, these Chinese were suddenly without work. Labor contractors recruited many of them to work on other regional railroads as in Texas, possibly, Alabama, and in Mississippi. 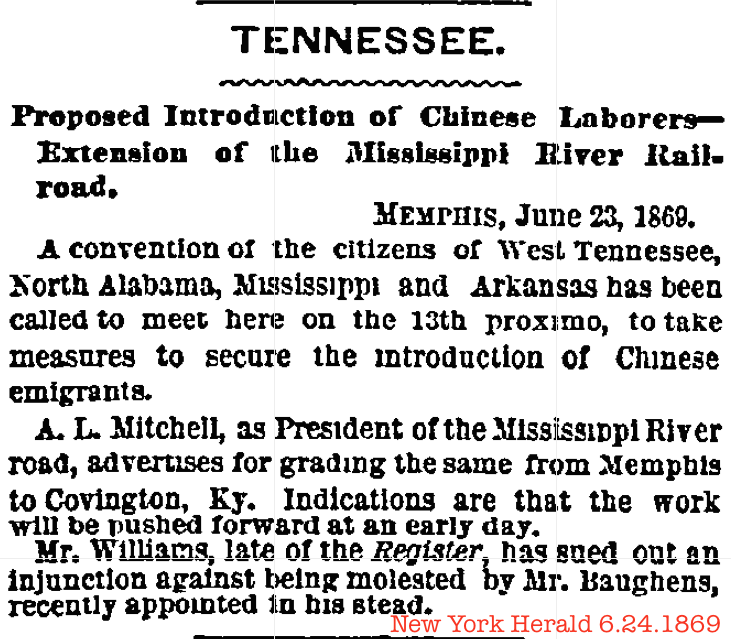 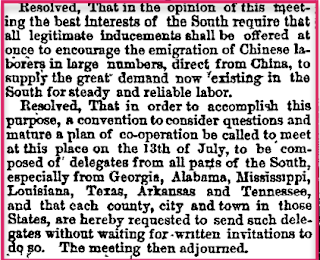 While some workers headed back to the Pacific coast, others stayed in the rocky mountain area or quickly edged their way into the midwest, south, and east coast. This relocation of Chinese was facilitated by the search for cheap, but reliable, labor. The transcontinental railroad was completed in May of 1869, and before the summer ended, Southern planters had developed plans at a convention in Memphis to bring Chinese from as far away as China to replace the black slaves in the cotton fields. 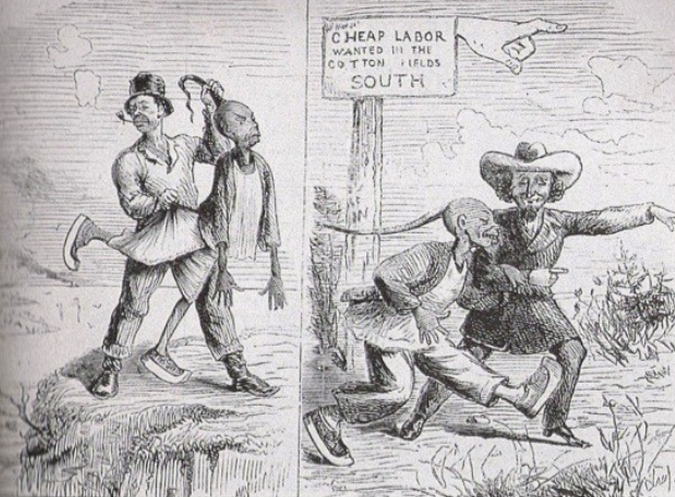 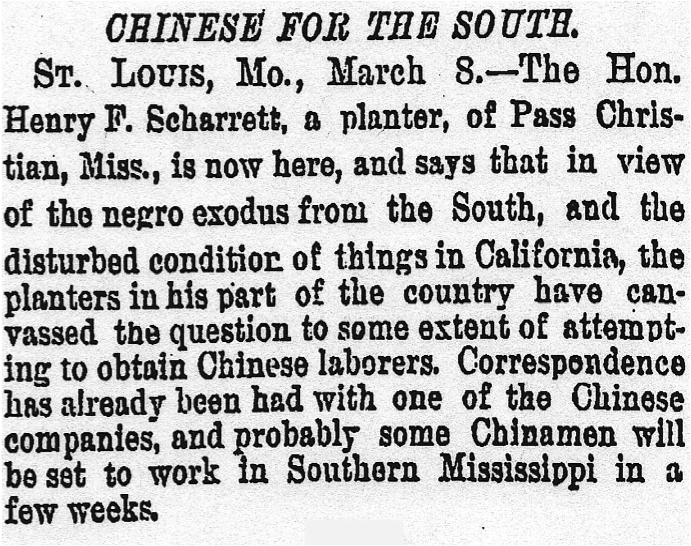 Newspapers announced any sightings of Chinese headed toward the South. One planter in 1869 was quoted as saying that arrangements had been made to bring "some Chinamen" to Southern Mississippi due to the "negro exodus" from the South.  Another article noted that an agent from a St. Louis labor contractor was arranging for a supply of Chinese labor to work in Alabama. 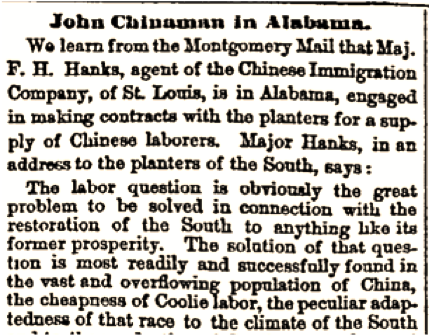 Accurate evidence on the number of Chinese brought to the South is difficult to obtain. For example, the 1880 Census indicated there were 467 Chinese in Louisiana which is somewhat at odds with a 1873 New Orleans newspaper report that 220 Chinese were brought to Louisiana and 55 to Arkansas in 1869. There was a much larger discrepancy with the 1880 Census count and the claim by Chinese labor contractors of 2,000 Chinese. 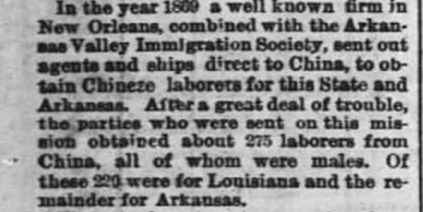 Not having had direct contact with Chinese immigrant labor, it is not surprising that efforts had to be made to persuade some planters that the Chinese would be a valuable source of cheap and reliable labor. Newspapers published praise of Chinese workers to reassure the skeptical. 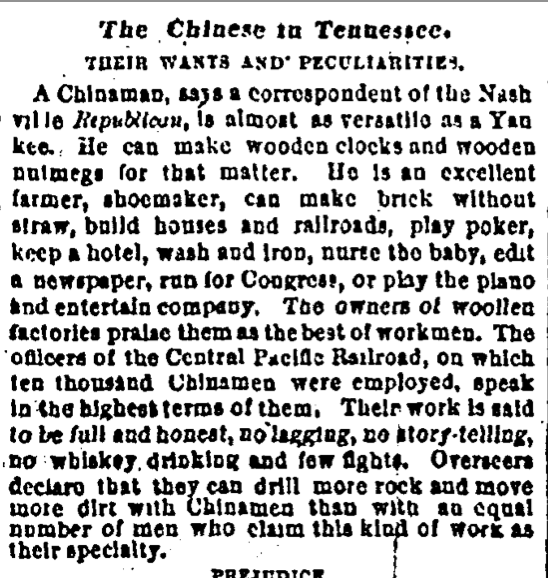 The article went on to say that "It remains to be seen how John Chinaman will be received in the South. The experiment is to be made on a scale worthy of the great national question of labor.  Five hundred Chinamen have been landed or will be landed at Memphis in a few days, and then will be scattered through the large and small towns of the South...Ir remains to be seen how the Oriental will stand the stern Anglo Saxon southern test of labor, capacity and availability."

Only 4 years later, in 1873 Chinese laborers from Indianapolis moved to Augusta, Georgia to work on the construction of the Augusta canal.  The Augusta Chronicle on Nov. 5, 1873 confirmed that 25 "Celestials" (as they referred to Chinese then aside from "Chink" and "John Chinaman") had arrived the previous morning via the Georgia Railroad. A labor contractor, Mr. E.L. Rider, himself half Chinese, arranged to bring them from Indianapolis where they had been working to help expand the Augusta Canal.

Curious onlookers gathered as most of them had never seen a Chinaman before. Another 30 were on the way. How many, if any, of these men stayed in Augusta is unknown, but it seems plausible that some of them did. If so, they would have been among the few Chinese in Augusta. where eventually there were several hundred Chinese including women and children, making it the largest Chinese community in the southeast.

One forecast in the Macon, GA. Weekly Telegraph on May 21, 1869 predicted that legal barriers would not be created to stem the "overwhelming floods" of Chinese that were certain to come to the South, immigrants who would not be content to work on plantations. 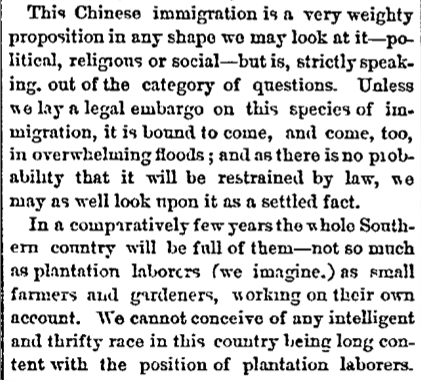 An economic depression hit the country in the 1870s and fears that cheap Chinese labor would deprive white Americans of work combined with xenophobic reactions to these foreigners with different customs and language generated growing opposition against Chinese laborers.

In contrast, less vocal advocates of the use of Chinese labor such as a writer for the Augusta Chronicle tried to reassure the public that the size of the threat of a handful of Chinese was minimal.

The 1869 prediction proved both right and wrong. Large numbers of Chinese did come to the U. S., as forecast, but the prediction that no legal bars would be imposed was dead wrong.  The Chinese Exclusion Law passed in 1882, and would last until 1943, drastically curtailing Chinese immigration for decades.

Posted by Chinese American Historian By Chance at 9:20 PM No comments: