Chy Lung was one of 22 Chinese women on the steamer Japan that journeyed from China to San Francisco in 1875. The immigration commissioner decided that Chy Lung and the other 21 women were "lewd and debauched women," because they were traveling alone. The captain of the ship refused to post a $500 bond per woman to allow her to land and detained the women on board. They sued and filed a writ of habeas corpus, that allowed them to disembark under the custody of the Sheriff of the County and City of San Francisco.

Interesting, no one knows what happened to the 22 "lewd and debauched" after they were allowed to enter the U.S., and it was suspected that some, if not all, were indeed prostitutes.

Judge Denny Chin, a circuit court judge in the United States who is famous for sentencing Bernie Madoff, arranged for the enactment of a courtroom drama about the case. He considered the case historic because it was the first by a Chinese litigant, and also one where the court ruled in favor of the litigant at a time when sentiment against Chinese and immigration was rising in the 1870s. 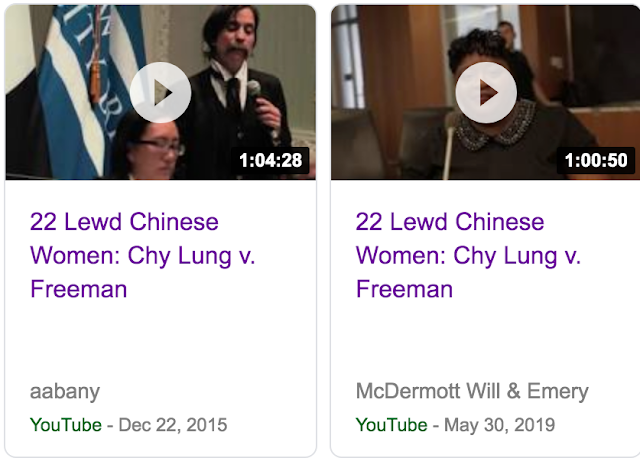 A second re-enactment of the trial was sponsored by a Washington, D.C. legal firm, McDermott Will & Emery.

Posted by Chinese American Historian By Chance at 11:35 PM No comments: Links to this post

When I was researching the rise of Chinese restaurants in the 1920s, I stumbled upon a 1921newspaper article about a boxing match featuring a bantamweight Chinese boxer named Georgie Lee.  He received enthusiastic crowd support for his vigorous performance even though he lost the match. 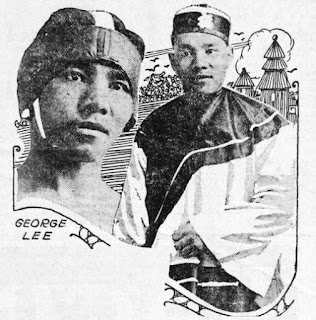 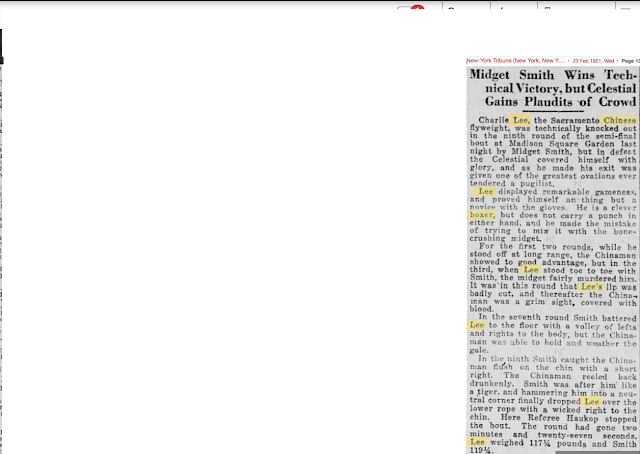 Lee started boxing in Sacramento at an early age of 10 in 1910 (and lived to a ripe age of 92) and became popular on the East Coast and American South even though his record was modest, at best.

Despite his limits as a boxer, his manager marketed George as the "Yellow Peril of the Prize Ring," and added a theatrical gimmick by having George wear an Oriental robe and false pigtail when he entered the ring. 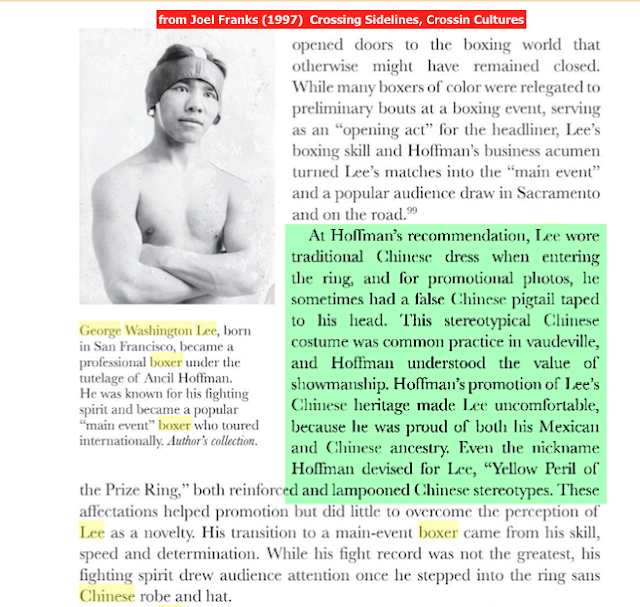 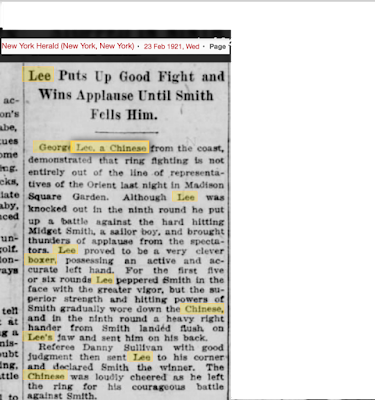 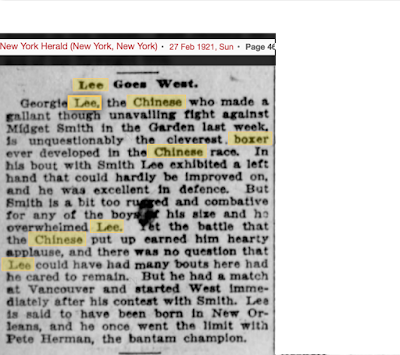 Typical of the racism against Chinese for many decades, the journalists often made condescending and mocking comments.  At least the audiences did show some admiration for the spunky fighter that George was even though he was never more than mediocre as a boxer.

George and his brother Raymond had boxing matches outside the U.S, as well.  They had boxing matches all over the world— Canada, Japan, China, Hong Kong, Australia, Germany, France, and the British Isles.
Below is George's Immigration Form 430 which under the Chinese Exclusion Act all Chinese had to file if they left the country and planned to reenter later. 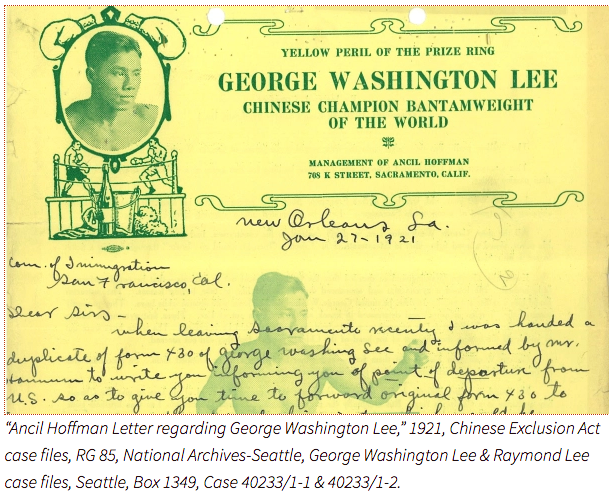 Posted by Chinese American Historian By Chance at 2:46 PM No comments: Links to this post

By the middle of the 19th century as increasing numbers of Chinese came to the western part of the U.S. in search of gold, the Chinese were increasingly demonized as threats to white labor. They were vilified further with a major recession in 1873. Eventually, the Chinese Exclusion Act was passed in 1882 to prohibit the entry of Chinese laborers for 10 years. However, it was renewed for another decade with the Geary Act in 1892, and would not be repealed until 1943.
Chinese who were already in the U.S., either immigrants or American-born who wanted to make visits to China had to complete a Form 430 as the one for actress Anna Mae Wong in 1935 shown below certifying their status so they could reenter the U.S. without going through the procedures used for new immigrants. 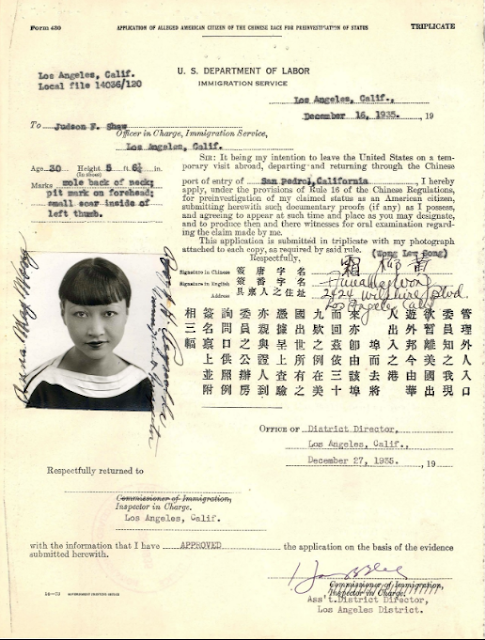 Unlike the better known 1882 Chinese Exclusion Act that blocked entry of Chinese, in 1888 the Scott Act denied reentry of around 20,000 Chinese who had left the U.S. to visit China even though they had obtained Certificates of Return before they departed that were not honored. 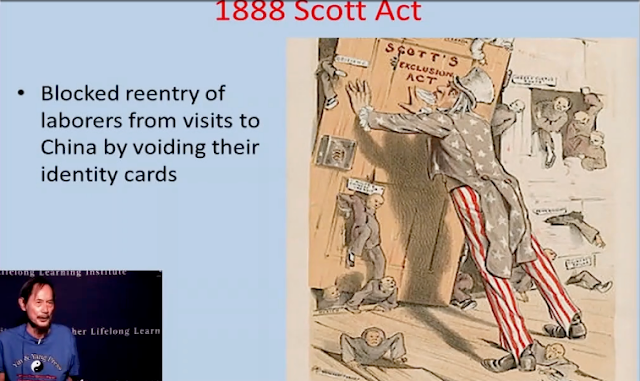 Chae Chan Ping (n.d.) traveled to China to attend to his father’s death before the Exclusion Act. Ping acquired a Certificate 38 and, on June 2, 1887, he sailed for China after having been a California resident for twelve years. Ping returned on October 7, 1888, and presented his certificate when his ship arrived in San Francisco.
However,  a few days before his arrival, Congress passed yet another amendment to the Chinese Exclusion Act that declared “every certificate heretofore issued in pursuance [of the law] is void and of no effect, and the Chinese laborer claiming admission . . . shall not be permitted to enter the United States.” Ping's attorneys submitted a habeas corpus petition and challenged the decision arguing that Congress could not deport a Chinese citizen entitled to reside in the U.S. under the Burlingame Treaty of 1868 which guaranteed the right of Chinese and U.S. citizens to immigrate between the two countries and outright rejected any attempts to restrict this immigration. The circuit court of northern California denied his entry so the case was taken to the U.S. Supreme Court, Chae Chan Ping v United States, which also denied Ping's right to reenter the U.S. despite the fact he owned property in the U.S.
On May 13, 1889, Justice Stephen Jay Field, writing the decision for a unanimous court, portrayed Chinese immigrants as a threat to American civilization, since they refused to assimilate into American culture and were outcompeting white laborers. He argued that immigration policy was a right of the federal government free from judicial review since a strict immigration policy, especially in regards to Chinese immigration, was vital to the national interest. Therefore any certification held by Chinese immigrants prior to the passage of the Scott Act, “is held at the will of the government, revocable at any time, at its pleasure.”
This so-called Chinese Exclusion Case gave rise to the "plenary power doctrine" as the Supreme Court transformed congressional power over immigration “into a power of national self-defense derived from the nation’s inherent sovereignty.” Justice Stephen Field said that the government must “give security against foreign aggression and encroachment,” whether it came “from the foreign nation acting in its national character, or from vast hordes of its people crowding in upon us.”
But what happened to the more than 20,000 Chinese who returned from China in 1888,  only to find the U.S. had slammed the door in their faces.  Not being allowed reentry meant no access to their property  in the U.S.
Hopefully many or most filed petitions of habeas corpus and found a way to gain reentry, but as far as I could find, no one has documented their fate.

Posted by Chinese American Historian By Chance at 8:46 PM No comments: Links to this post

Married couples fight over many issues,  but it would seem unlikely that chop suey might be one. In 1910, Wing Lee, a Chinese physician married to a Norwegian for six years, felt his obligation to feed her was limited to Chinese food, and did not include "bread and butter" or in other words,  American foods. Mrs. Lee, however, "fed up" with her "chop suey diet," took him to court, which proved a bit embarrassing for her because the testimony revealed some negative or questionable aspects of her behavior such as her arrest for stealing money from another "Chinaman" or giving birth to a child in Norway before they married.  The judge ignored these tangential matters and ruled that the doctor must provide his wife with food "such as white people eat" or pay her $4 each week.

In 1913 Birdie Eill, the wife of  Jacob Eill, a trucking contractor, sued for separation and alimony on grounds that he abandoned her in favor of going to dances to be with "soubrettes" or flirtatious women. He countered that she deserted him, did not cook for him,  and was "fond of chop suey beyond expression."
The judge ruled in favor of Mrs. Eill, although he only awarded her a third of her alimony requested.

A more dramatic story of marital discord that involved chop suey was a 1922 Long Island murder case in which a husband "accidentally" shot his wife fatally.

William and Celia Stenger had argued in a restaurant over his refusal to buy chop suey for her. When they got home, Celia exclaimed rather melodramatically she was going "to end it all" and went to her room. Mr. Stenger then entered her room and wrestled with her in an attempt to take a pistol from her but it accidentally discharged, killing her.  As there were no witnesses, the quick-thinking husband wrote a suicide note and forged her signature. 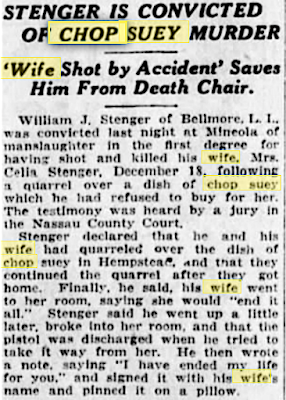 Nonetheless, he was convicted of first-degree manslaughter.

One lesson to be learned from these three unhappy marriages: don't fight over a dish of chop suey, it ain't worth it!


Posted by Chinese American Historian By Chance at 10:14 PM No comments: Links to this post