History acknowledges the importance of Sun Yat Sen in leading the Chinese revolution in 1911 that overthrew the Emperor Dowager, Cixi. Little attention is given to her other opposition, the Empire Reform Association which also wanted to promote societal changes to develop a modern China, but it also wanted to restore the monarchy to the rightful Emperor Guangsu, rather than abolish it.

Many Chinese in Canada and the U. S. were supporters of this rival to Sun Yat Sen's movement. Several hundred chapters of the Empire Reform Association (Bao haunghui, Protect the Emperor Society) were established in North America.

One indication of the strong support from Overseas Chinese was an enthusiastic reception that one of its principal leaders, Leong Kai Chew (aka Liang Qichao) received on his 1903 visit to Boston. 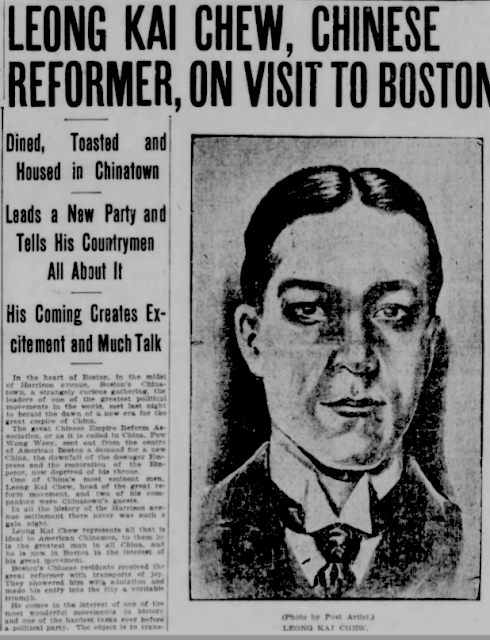 This is another instance where historians recognize the winners and relegate the losers to the 'dustbin of history.'
Posted by Chinese American Historian By Chance at 4:03 PM No comments: Links to this post