"Ching Chong Chinaman" is a well-known offensive slur often used to taunt Chinese, and sometimes other Asians, for many decades in countries with many Chinese immigrants and their descendants. The slur occurs in countless limericks, some directed for children but others were of a bawdy nature.  Several examples are:


'Way out in old "San-Fran" there is a Chi-na-man,
who's known for miles a-round;
Won-der-ful place he keeps, down where he eats and sleeps,
way un-der-neath the ground!
Each night the fes-tive chinks, come there to wink and blink,
and dream a-way the hours.
They sing this fun-ny song while they are borne a-long
on beds of pop-py flow'rs,

(Verse 2)
When you're in "Fris-co town" don't fail to drop a-round
and see this Ching Chong man.
Wonderful things you'll learn down where the torch-es burn,
he'll show you all he can.
Then, when the time is ripe he'll fill your lit-tle pipe
and then a light he'll bring.
Gent-ly you'll float a-way far out on slum-ber bay ,
and soft-ly you will sing:

Ching Chong Chinaman can easily be confused with the very similar "Ching Ching Chinaman,"  which was the title of a short story written in1917 by a leading short story writer of the early 20th century, Wilbur Daniel Steele.  Even though Yet Sin, his Chinese laundryman character is depicted in stereotypical ways, it is one of the first somewhat sympathetic depiction of a Chinese, as he is a hero of sorts in exposing a blackmailer before   returning to China at the end of the story.

The short story was made into a silent film in 1923, Shadows, which was promoted as "The Greatest Story Ever Told in Motion Pictures."  Lon Chaney, the great silent film era actor (The Hunchback of Notre Dame (1923) and The Phantom of the Opera (1925), played the role of the Chinese laundryman. 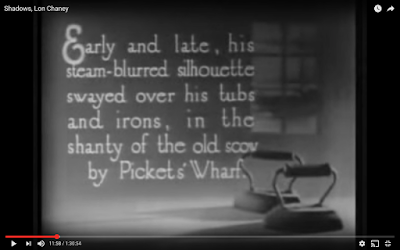 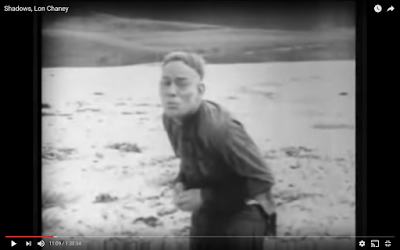 Chaney's "yellowface" performance was highly acclaimed by two critics in the early 1920s.

Now and then a picture is produced that stands out above the others, just as the Woolworth building stands out above all the buildings that surround it. It is such pictures as these that prove beyond any doubt that picture-making is an art. Such a one is "Shadows" - a picture that stands out above all others. With a worth-while theme as it foundation, masterfully directed and artistically acted, with its setting and general atmosphere realistic, the story creates in the mind an impression that lasts many days and weeks after one has seen the picture. Through tragedy, the sad fate of the principal characters does not leave an unpleasant feeling. On the contrary, their fate so arouses the compassion of the spectator that he feels regret for not being able to help relieve their sufferings. The acting of Mr. Chaney, who assumes the role of a Chinaman, is remarkable. Better acting he has never done in his life.

Wilbur Daniel Steele's prize story, "Ching, Ching, Chinaman," makes a picture which is certain to be accepted as one of the better things under its new title of "Shadows" - principally because of Lon Chaney's eloquent pantomime as a Chink, and the spiritual value of the theme. The locale? A fishing village. The central figures? A young clergyman and his bride, whose first husband made her a widow when he was lost in the angry sea. The motif? The Chinaman's devotion in returning a kind deed. He watches and waits to unmask the villainy of the disappointed suitor - the pillar of the church who has compelled the youthful domine to pay hush money under the threat that he will be exposed as a bigamist. The Chink accepts Christianity when he sees the lesson of faith and humility. Some compelling scenes. But mostly a character study for Chaney who demonstrates his uncanny talent for characterization. Worth seeing. Don't be ashamed of your tears.

Ching Ching Ching Chinaman, a racist song composed in 1923  by Eve Unsell with music by Lous F. Gottschalk promoted the Lon Chaney movie, although it was not included in the movie.

So in the long run, it seems to matter not whether we are talking about Ching Chong or Ching Ching, They both are deep rooted racist slurs that continue to surface even today.

Posted by Chinese American Historian By Chance at 11:36 AM 2 comments: Links to this post