A White Aristocrat's Negative View of Delta Chinese in 1941 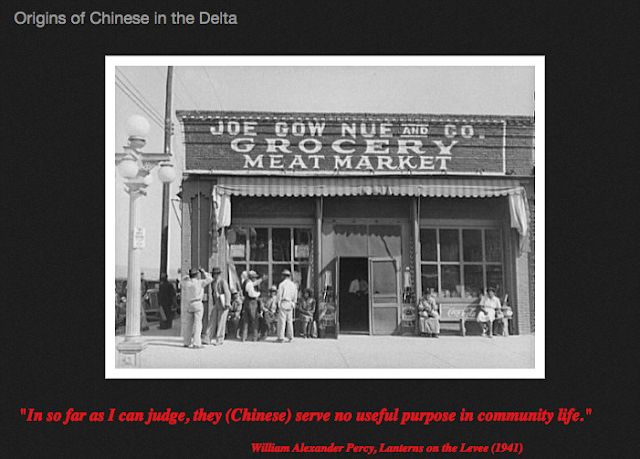 The Chinese were a small but vital community spread across the Mississippi Delta for over a century operating family-run grocery stores that primarily served the black plantation workers who were not usually welcome at large white grocery stores.  Overcoming many obstacles, including racial prejudices, they succeeded and made valuable contributions to their community. Recognition of the Chinese role was demonstrated in an earlier post on this blog in 2011 that presented Mississippi Public Radio interviews with three Delta Chinese with a grocery store background.

However, even as late as 1941, the Chinese "got no respect" from white gentry as illustrated by the demeaning comment about the lack of useful contributions to the community by the Chinese. This observation was made by a prominent white writer and plantation owner, William Alexander Percy, in his nostalgic memoir, "Lanterns on the Levee", which was a romanticized lamentation for "the good old days." However, Percy was not a "redneck" racist; in fact he led the fight against the rising power of the Ku Klux Klan in the 1920s.

The following paragraph excerpted from Percy's memoir provides a clearer context for understanding how even educated and influential white community leaders had a narrow view of Chinese, portraying them as lawless illegal immigrants who often fought among themselves in tong wars. 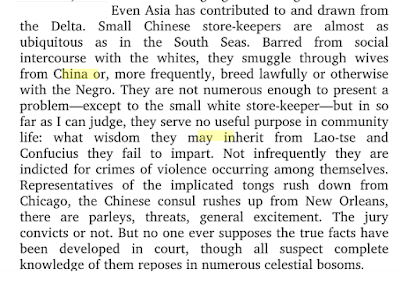 Posted by Chinese American Historian By Chance at 8:53 PM