Chinese Merchants in the Delta

The Chinese Exclusion Act of 1882 subjected Chinese all over the U. S. to investigation by Immigration officers as they searched for Chinese immigrant laborers who were not admissible. The extension of this act in 1892, Geary Act, for another decade added  the stipulation that all Chinese merchants now had to carry a Certificate of Residence or "choc chee," as Chinese called it, or they would be deported.

For example, Chang Kam in Gunnison, Mississippi was investigated by an immigration officer in 1903. Chang testified that he had been a merchant in partnership in Gunnison for about three years following a dozen years as a merchant in Rosedale. 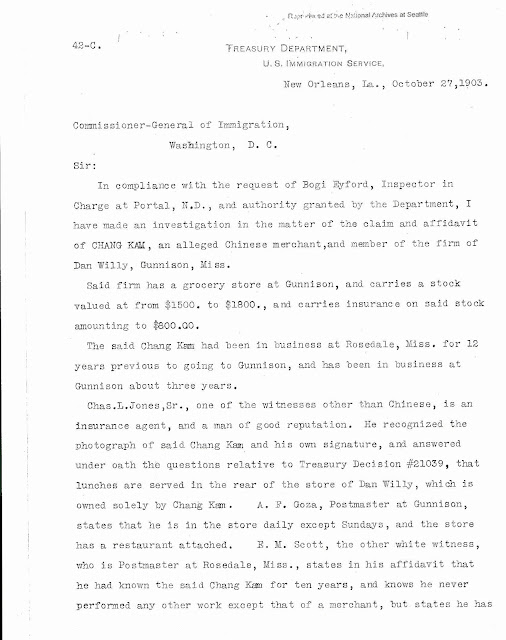 His assertion was insufficient evidence and he was referred to as an "alleged merchant"in the investigation. Like other Chinese, he had to find 2 white witnesses who would testify that they knew him and that he had lived and worked in the area.  Since the Chinese Exclusion Act singled out Chinese laborers, witnesses had to testify specifically that they had never seen the Chinese person do any "manual labor," which was another way of establishing that he was a merchant, not a laborer, and eligible to be here.

An account by an elder member of the Arkansas Chinese community, Mr. Chao, included in a 1951 Master's Thesis by Pao Yun Liao provides a typical story of how Chinese came to the Delta and how they earned a living.  It generally involved chain migration in which a relative already in the Delta recruited a new young immigrant to join him in running a grocery store. In the case of Mr. Chao, he came over in 1904 at the age of 17 to join, and eventually replace, an uncle who had already been there since around 1890. He described how isolated it was for Chinese in the region as there were few other Chinese in the area and they were scattered in different towns. Mr. Chao further describes how Chinese helped each other establish and open new grocery stores and how they encouraged other relatives to come to the region to open grocery stores.

Posted by Chinese American Historian By Chance at 4:12 PM